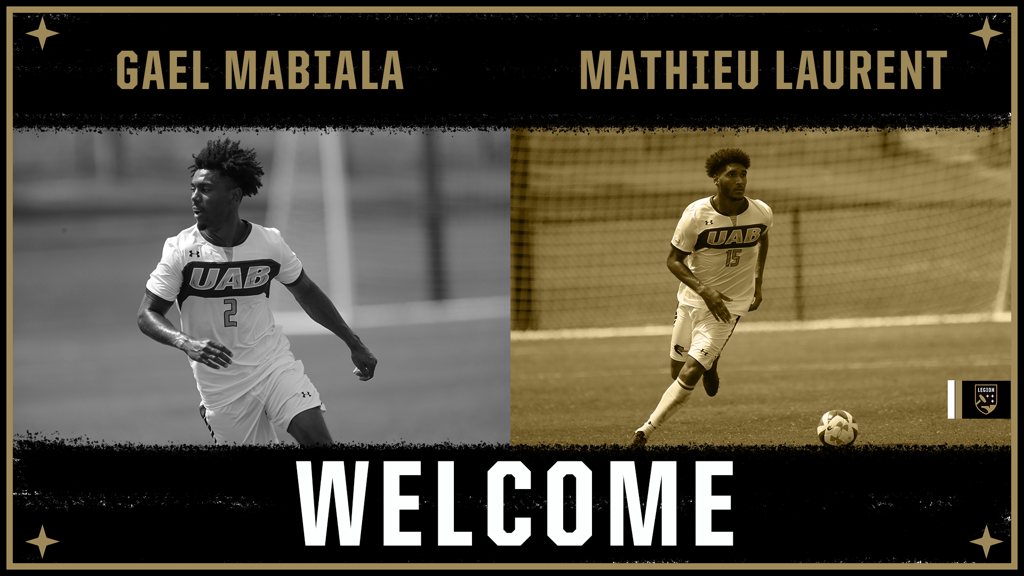 BIRMINGHAM, AL (Jan. 28, 2019) – Birmingham Legion FC announced today the signing of defenders Mathieu Laurent and Gael Mabiala. Both were vital members of the University of Alabama at Birmingham soccer team the past two seasons, had strong showings with the Premier Development League team, the Birmingham Hammers, and then earned invitations to the Legion FC combine in December.

“Given their ties to the local soccer community, we are excited to announce the signings of Gael and Mathieu,” said President and GM Jay Heaps. “These signings are another great example of Legion FC working with the quality players in this area, further developing our connection to the city and the University of Alabama at Birmingham.”

Mabiala played primarily at right-back for UAB and was named to the Conference USA Second-Team his senior year. He was a steady contributor on the score sheet last season, as well, adding a team-high four assists and a goal in 17 appearances. Before transferring to UAB his junior year, Mabiala played at Francis Marion University and made the All-Peach Belt Conference Second-Team as a sophomore midfielder in 2016.

Laurent played center-back as a team captain at UAB and earned a spot on the Conference USA Second-Team following his junior and senior seasons. He also made the All-Conference USA Freshman Team in 2014. Before coming to the States, Laurent was a member of the 2013 Canadian U17 National Team and played in the 2013 U17 World Cup in the United Arab Emirates.

About Birmingham Legion FC
Set to debut as an expansion member of the United Soccer League in 2019, Birmingham Legion FC is the Magic City’s first and only locally owned and operated professional soccer franchise. The club will play home matches at a newly renovated BBVA Compass Field, on the campus of the University of Alabama at Birmingham, beginning in the Spring of 2019. For ticket information and to purchase official Legion FC merchandise, please visit bhmlegion.com. Supporters are encouraged to follow @bhmlegion on Facebook, Instagram, and Twitter for the latest club news.