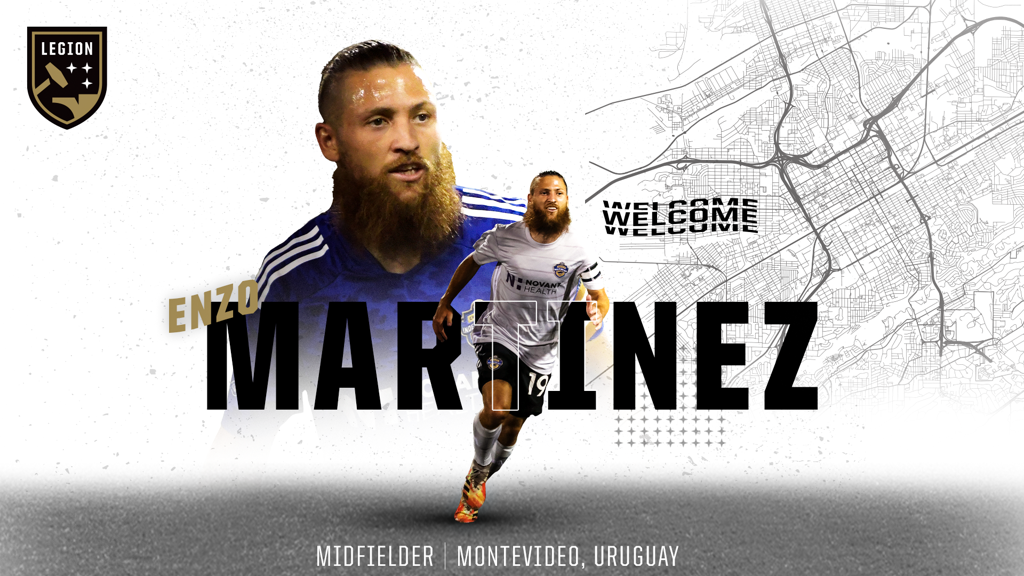 BIRMINGHAM, AL (Jan. 7, 2022) -- Birmingham Legion FC announced today the signing of attacker Enzo Martinez, pending league and federation approval. Martinez was named to the USL Championship All-League First Team in 2016 and 2017 and has accounted for 44 goals and 30 assists in his time in the USLC.

“We’re excited to have Enzo in a Legion FC jersey as he is a proven winner and finds ways to make players around him better,” said Jay Heaps, Legion FC President & General Manager. “He’s versatile with the ability to play multiple positions in the attack and with his competitiveness, will add an immediate toughness to our group.”

Martinez joins Legion FC after six seasons and 161 appearances with the USLC’s Charlotte Independence. In 2021, Martinez led the team with five assists, was tied for second with seven goals, was third in shots with 32, and was tied for third with 30 chances created.

After earning that All-League nod in 2017, Martinez signed with MLS-side Colorado Rapids for the 2018 season and played 25 times while adding three assists, before returning to Charlotte, where he was named team captain, for the past three years.

“I’m really excited for this opportunity to get to know new teammates and staff and to become a part of this community,” said Martinez. “But most importantly, the reason why Birmingham became the number one choice for me is because I truly believe that this team can win a championship. At this point in my career, the only thing I want is to win a championship, and I truly believe I have a chance to do so with Birmingham.”

Martinez’s first stint in Major League Soccer came with Real Salt Lake when the club drafted him 17th overall in the 2012 SuperDraft. He spent 2013 and 2014 with NASL outfit Carolina RailHawks, where he won the 2013 NASL Supporters Cup.

Before turning pro, Martinez was a standout player at the University of North Carolina, where he won the 2011 National Championship playing alongside current Legion FC midfielder Mikey Lopez. It is also no exaggeration to call Martinez one of the greatest high school soccer players of all time, after ESPN named him the ESPN Rise High School Boys Soccer Player of the Decade in 2009.

While in high school, he was named South Carolina Player of the Year four years in a row, won three state championships and a national title while scoring 182 goals at Northwestern High School in Rock Hill, SC, and added a national title with his club team, Discoveries SC.

Martinez and his new teammates will kick off the 2022 season at home on Sunday, March 13 at 4:00pm at the new home of Legion FC, Protective Stadium, and season tickets are available now! Find more info at bhmlegion.com/2022tickets.