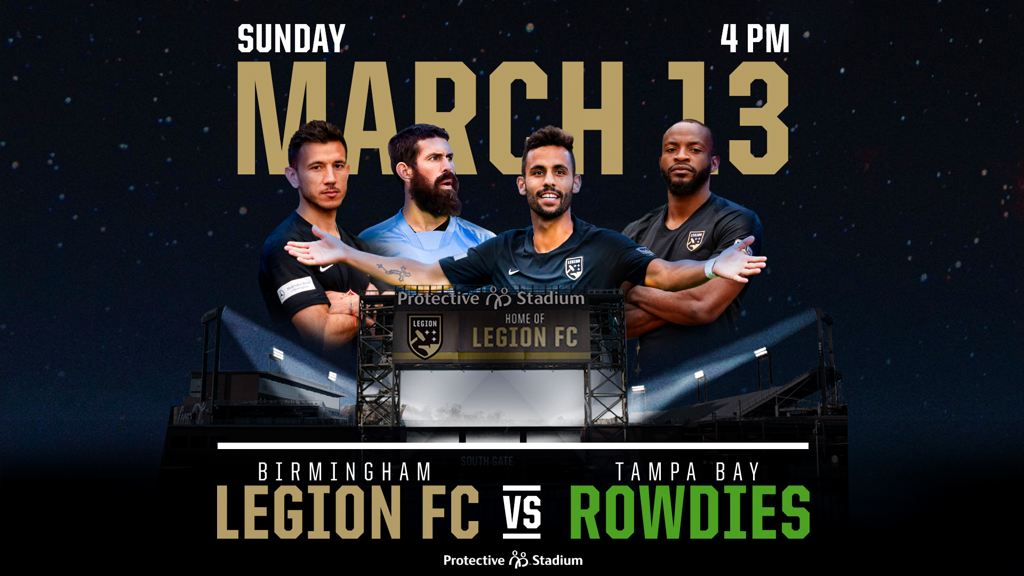 TAMPA, Fla. – The USL Championship announced today that Birmingham Legion FC will kick off its 2022 regular season at home versus the Tampa Bay Rowdies on Sunday, March 13 at 4:00PM.

The match will serve as a chance at revenge for the Three Sparks after two consecutive playoff showdowns with the Rowdies, and it will be played at the club’s new home, the brand-new Protective Stadium in Uptown Birmingham.

The USL Championship will open the 2022 season with a full slate of 13 games on the opening weekend of the campaign, and 23 of the 27 clubs will play their first home match within the first two weeks of the regular season, as the league opens its 12th season on Saturday, March 12.

Newcomers Monterey Bay F.C. and Detroit City FC will make their debuts on the road, with Monterey Bay and Head Coach Frank Yallop set to visit one of his former clubs in Phoenix Rising FC. Detroit City, meanwhile, will feature in the lone interconference match of the opening weekend as it visits San Antonio FC.

The second Saturday of the season, March 19, brings another intriguing set of matches highlighted by one of the league’s best rivalries when El Paso Locomotive FC and New Mexico United meet at Southwest University Park. Elsewhere, Orange County SC will welcome fellow 2021 postseason club Rio Grande Valley FC in its home opener as defending title holders, while Detroit City FC will take on the Charleston Battery in the first USL Championship game at Keyworth Stadium in what is sure to be a raucous and memorable atmosphere.

For Monterey Bay F.C., the freshly-renovated Cardinale Stadium on the campus of CSU Monterey Bay will be worth waiting for as it hosts its inaugural home match against Las Vegas Lights FC on Saturday, May 7.