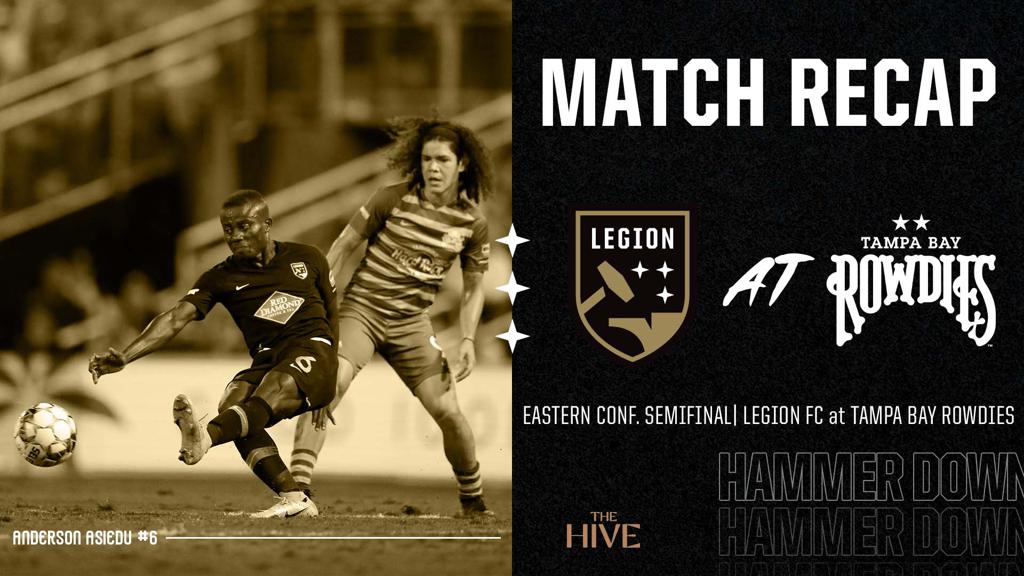 The first half saw both sides looking to take an early lead, with the hosts forcing the Black & Gold to make several goal line clearances around the six minute mark. Legion FC had dangerous moments of its own, breaking nicely on the counterattack to threaten the Rowdies backline at points throughout the first half. The contest proved to be a battle throughout, as the Rowdies found it difficult to break down a well organized BHM.

“We wanted to make it hard for them,” said Legion FC Head Coach Tom Soehn.  “I think in a lot of ways we congested the areas they felt comfortable attacking in. It was really the one play where they were able to break us down and we got caught in the attack, and they punished us for it. We took some chances going forward, but it’s disappointing in the fact that I think we had a solid game plan and the guys carried it out. It just takes one play to hurt you, and they hurt us they’re a good team. All the best to them going forward, I hope they represent the East well. I know we put them right to the wire.”

Legion FC would not be deterred, though, pushing for an equalizer and ensuring the hosts did not stretch their lead. Defender Alex Crognale came closest to leveling the score for his side on a corner kick, rising over his defender to meet the ball and direct it toward goal - unfortunately, Rowdies goalkeeper Evan Louro was there to collect.

Despite the result, Legion FC showcased grit against the number one overall seed in the USL Championship playoffs, a sign of the togetherness within the group that has helped them throughout the season.

The Three Sparks welcome several key newcomers prior to the start of the season, with defender Ryan James one of the club’s new signings heading into the 2021 USLC season. While James and his teammates came up short against Tampa Bay, the outlook is still positive after his first season with BHM.

“It’s been awesome,” said James. “Very welcoming from the staff, to the players, to the fans, and to everyone in the city that comes to the games. That definitely helps you perform at a high level game in and game out, especially at a high level. I’ve had an amazing experience, and I’m excited to come back next year and fix some of the things we can fix and come back to this postseason spot and get a win.”