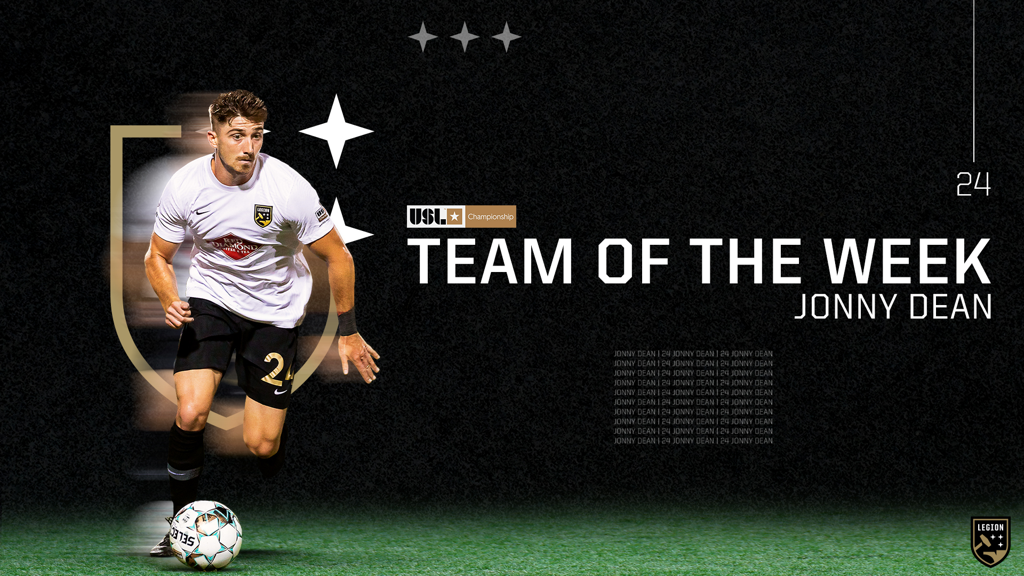 TAMPA, Fla. – The USL Championship announced the Team of the Week Presented by Cleer Audio for Week 26 of the 2021 regular season on Tuesday, with Legion FC defender Jonny Dean earning a spot for his stellar performance in Birmingham’s 0-0 draw at OKC Energy FC on Sunday.

The Macon, GA product was all over the pitch, yet again, from his right back role, helping shut down OKC leading scorer Villyan Bijev, to the point that Bijev switched sides of the field, as well as bombing forward as a creative outlet in the attack. Dean finished the match with a team-high four interceptions, won three duels, added two blocks, two chances created, and one clearance while completing 84% of his passes.

USL Championship Team of the Week – Week 26
GK – Jordan Farr, Indy Eleven: Jordan Farr recorded a five-save shutout and a -1.90 Expected Goals Differential to keep Indy in the game against Louisville City FC before a late goal earned the hosts a 1-0 victory and the season series in the LIPAFC against their biggest rivals at Michael A. Carroll Stadium.

D – Josh Drack, LA Galaxy II: Josh Drack recorded three assists across a pair of contests, including two assists in Los Dos’ 5-0 victory against El Paso Locomotive FC on Sunday evening, and over the week completed 63 of 81 passes and made five interceptions and 11 recoveries.

D – Mark Segbers, Memphis 901 FC: Mark Segbers recorded the game-winning goal for 901 FC as it took a 2-1 victory against Louisville City FC on Wednesday night, and across two games recorded seven interceptions and 11 recoveries while completing 45 of 65 passes.

D – Ashkanov Appolon, Hartford Athletic: The Haitian veteran was impressive as Hartford swept a pair of victories against Loudoun United FC, recording one assist in the side’s 3-2 win on Wednesday night as he won 13 of 16 duels, made 15 recoveries and completed 33 of 45 passes across both games.

M – Aodhan Quinn, Phoenix Rising FC: Aodhan Quinn became only the 21st player to record three assists in one game in Phoenix’s 6-3 victory against Las Vegas Lights FC on Saturday afternoon and moved into a tie for the league-lead on 11 assists for the campaign while finishing the contest with 12 key passes overall.

M – Nick Ross, El Paso Locomotive FC: Nick Ross recorded a pair of assists and four key passes overall in El Paso’s 4-2 victory against Colorado Springs Switchbacks FC on Wednesday night and ended the contest having won 7 of 7 duels and made 13 recoveries while completing 38 of 51 passes.

M – Alejandro Guido, San Diego Loyal SC: The San Diego native continued to shine for SD Loyal in a 1-1 draw against New Mexico United on Sunday afternoon as he notched one assist and five key passes while winning 15 of 19 duels and completing 29 of 36 passes in an impressive all-around performance.

M – Leo Torres, Real Monarchs SLC: The 17-year-old recorded not only his first professional goal but bagged a pair of outstanding finishes as the Monarchs took a 4-3 victory against Austin Bold FC on Saturday afternoon.

F – Cal Jennings, Las Vegas Lights FC: Cal Jennings recorded a hat trick in a losing cause for Las Vegas on Saturday afternoon at Cashman Field, scoring all three of Lights FC’s goals in a 6-3 defeat to Phoenix Rising FC while recording five shots and one key pass overall.

F – Dane Kelly, Charlotte Independence: The Jamaican forward scored twice as the Independence clinched their playoff berth and moved into second place in the Atlantic Division with a 5-1 win against the Charleston Battery while recording five shots and completing 15 of 20 passes overall on Saturday night.

F – Jorge Hernandez, LA Galaxy II: The 20-year-old playmaker recorded a goal and assist, had three shots and four key passes and completed 20 of 24 passes as Los Dos moved closer to clinching a third consecutive trip to the playoffs with 5-0 victory against El Paso Locomotive FC on Sunday at Dignity Health Sports Park.

Dean and his teammates next match is this Sunday, at home against Sporting KC II! Join us for a 4:00PM kickoff as Legion FC continues its march towards clinching first place in the Central Division ahead of the upcoming USL Championship playoffs.

Fans can get tickets HERE, including $5 general admission tickets using promo code WIN, and can contact the Legion FC Ticket Office at 205-600-4635 or tickets@bhmlegion.com with any questions or requests.