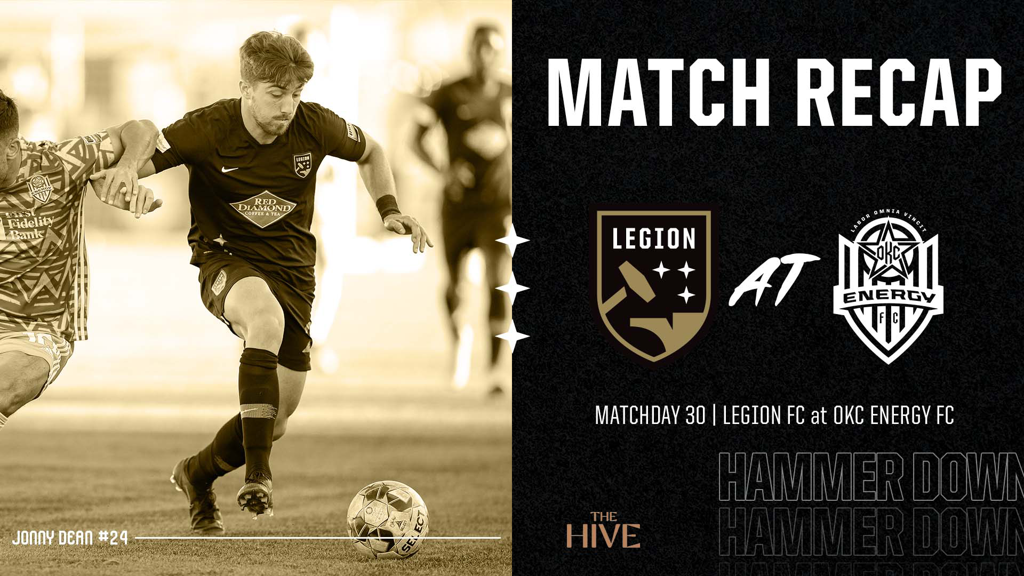 OKLAHOMA CITY, OK (Oct. 17, 2021) – Legion FC hit the road for its final away contest in the 2021 USL Championship regular season on Sunday night and had to settle for a 0-0 draw at OKC Energy FC, despite getting off 13 shots, and holding an edge in possession. The team’s five game winning streak ends, but the unbeaten run is extended to eight.

In the attack, the best opportunity for the visitors came in the 75th minute as a one-two with Ryan James saw substitute forward JJ Williams get a shot off from around the penalty area that was blocked. Midfielder Bruno Lapa then stepped up to hit the rebound, but OKC ‘keeper CJ Cochran produced a diving save, one of his five in the game, to keep it out.

Lapa and Asiedu led the way with three shots a piece, forward Junior Flemmings added another two on target, and Lapa, James, and Dean all had two key passes leading that created chances.

“On this field it’s difficult because it’s so small,” said Head Coach Tommy Soehn. “I think the space is so limited, and package that with them [OKC Energy FC] sitting in a little bit, and it’s hard to break that down. But we also had a couple chances, and if you put those chances away, especially early, it would force them to come out. We made a few adjustments because I don’t think we were good in the first half, at least in the second half I felt like we had them under pressure quite a bit. We just couldn’t get one today.

“We’re focused on trying to get as many points as we can, you know, because we’re not only competing against our own division, but we’re competing against the other division [Atlantic] as well. Every point is vital, and we’ve talked about that as a group, to try and keep pushing to get as many points as we can. Obviously, we leave today disappointed that we left two on the table, but it’s been a good run of form and we’ll just have to keep grinding. We know what’s at stake, and our goal now is to get the next three [points], and then we’ll deal with what comes up after that.”

With two games left in the regular season, at home on Sunday, October 24 against SKC and at home on Saturday, October 30 versus LouCity, Legion FC now sits two points clear of Louisville in first place in the USLC Central Division.

“Everyone is fighting for points, playoffs and home field advantage, so we need to stay confident and believe in ourselves because we still can control our own destiny in this division,” said James. “Yes, we look at the standings, but ultimately the goal is to win and to be in the best form we can be heading into this last stretch of the season, that’s our main focus.”

Legion FC’s next home game is Sunday, October 24 at 4:00PM versus Sporting Kansas City II as the team looks to keep the unbeaten run going and clinch first place in the Central! Fans can get tickets HERE and can contact the Legion FC Ticket Office at 205-600-4635 or tickets@bhmlegion.com with any questions or requests.