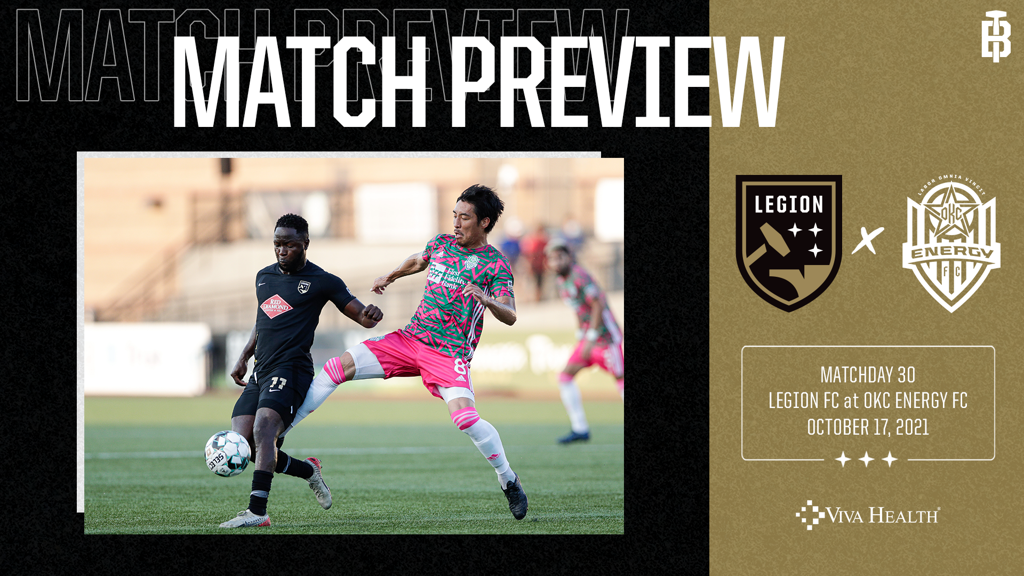 After winning its fifth in a row on Wednesday night, at 3-1 drubbing of Austin Bold FC, Legion FC took over first place in the USL Championship Central Division and clinched home field advantage in at least the first round of the playoffs for the first time in club history.

Forward Neco Brett bagged his 17th goal of the season at midweek, to pull up into a three-way tie for third-most in the league with two other Central Division stand outs, Memphis’ Kyle Murphy and Louisville’s Cameron Lancaster. Center back Alex Crognale continued to anchor the backline, alongside captain Phanuel Kavita, and put away his third goal of the season versus Austin, while midfielder Bruno Lapa continues to round into last season’s ‘USLC All-League First Team’ form, as he scored his first goal since returning from injury last month.

The contest against OKC will be the teams’ fourth, and final, matchup of the season. Birmingham knocked off OKC at home in May, 1-0 thanks to a Lapa goal, won 2-1 in OK in June on the back of goals from Brett and JJ Williams, and both teams drew, 1-1 in BHM, in September after an equalizer from Mikey Lopez.

OKC comes into the game with its postseason dreams on life support, as the team sits in fifth place in the Central, on 36 points, three back of fourth place Tulsa, but having played two more games. FiveThirtyEight currently gives OKC a five-percent chance to make the playoffs, so Energy FC will give Legion everything its got in both team’s third to last game of the regular season.

The team has remained competitive, with just one loss in its last five and a nine-game unbeaten run at home, but to get a result, OKC will hope for an improved attacking performance, as its scored just five times in those five outings and its 30 goals on the season is tied for third fewest in the USLC. The attack is led, overwhelmingly, by midfielder Villyan Bijev, who scored both goals OKC managed to rack up this season against Legion FC.

Bijev has 12 goals on the season, good for tenth in the league, and only one other player on the team, Aidan Daniels with three, has more than two. Bijev is also tops in assists (six), shots (52) and chances created (30), so he will command the majority of Birmingham’s focus on Sunday afternoon.

OKC has earned its keep through solid defensive performances, currently having given up just 32 goals on the season, which is fifth fewest in the league, and its eight shutouts are tied with BHM for seventh-most. Goalkeeper CJ Cochran is sixth in the league in saves with 82.

The game forecasts to be a relatively cleanly played affair, as both teams are in the bottom four in the USLC in yellow cards drawn this season.

This game’s VIVA Health injury report is a welcome sight, as its empty for the first time in a while. Defender Freddy Kleemann (recalled from loan by Austin FC) will continue to be the only player unavailable for selection.

Fans can tune in to My68 or ESPN+ to watch the match or can follow @bhmlegion on twitter for live updates.

Legion FC’s next home game is next Sunday, October 24 at 4:00PM against Sporting KC II! Fans can get tickets HERE to come watch the team fight to clinch first place in the division, and are encouraged to reach out to the Legion FC Ticket Office (205-791-7145 / tickets@bhmlegion.com) with any questions or requests.