The team earned its second 3-1 home victory in four days thanks to goals from Alex Crognale, Neco Brett, and Bruno Lapa 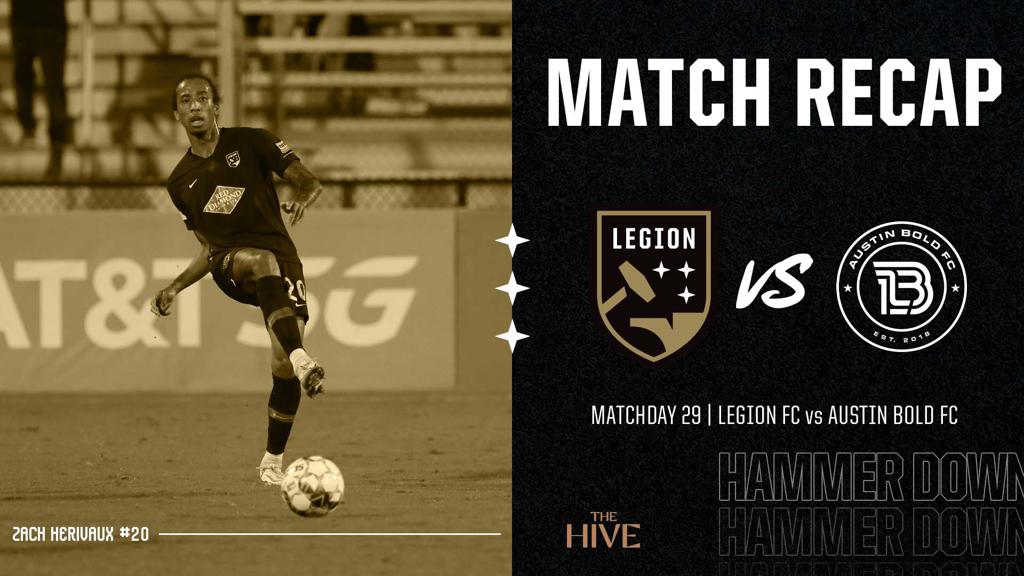 BIRMINGHAM, AL (Oct. 13, 2021) – Legion FC came into Wednesday night’s contest with a singular focus – win and the team would clinch a home playoff game. Thanks to a first half headed goal from center back Alex Crognale, a well-worked second half goal from forward Neco Brett, and a breakaway cherry on top from midfielder Bruno Lapa, that focus paid off in in the form of a 3-1 win over Austin Bold FC.

On Sunday, November 7, professional, postseason soccer will kick off in Birmingham for the first time ever.

Legion almost jumped out to the early lead inside the first minute of the game, as right back Jonny Dean got in behind the defense and found forward Prosper Kasim arriving around the penalty spot, but Kasim’s shot went just wide. The home side did not have to wait long for the breakthrough, however, as Crognale rose highest to guide in a powerful header and put his team up in the 15th minute.

Austin managed to strike back just minutes later via a counterattack that forward Nathan Adamolekun slipped in in the 23rd minute. Despite Birmingham holding a nine to five edge in shots and 64% of possession in the first half, the Bold FC goal sent the teams into halftime all tied up at one.

Legion FC kept the pressure on to begin the second half, and substitute attackers Jaden Servania, Lapa, and JJ Williams made instant impacts that, along with a couple big time diving saves from goalkeeper Trevor Spangenberg, helped lead to the team victory.

The game winner hit the back of the net in the 75th minute off the boot of Brett, Birmingham’s leading goal scorer. His 17th tally of the season pulls him up to a tie for third-most in the USL Championship. Servania found Brett at the top of the box before the Jamaican played a quick one-two with Williams to sneak behind the ATX backline and finish.

Brett followed up his goal with an assist on the final Legion goal, as he and Lapa found themselves on a two-versus-one breakaway opportunity in the 82nd minute. Lapa drove into the box and hit a cool, low finish into the bottom right-hand corner to put the icing on the cake.

“If you look at our team top to bottom, whether you’re a starter or coming off the bench, it doesn’t matter,” said Dean. “Anybody can start on our team any given day. As you see with the subs when they come in, they change the game and give us the extra edge that most teams don’t have. They don’t have as much depth as we do and as much experience coming off the bench. JJ [Williams] came in today and got an assist early on and changed the game really quick. It’s things like that. That’s what you’re looking for. Good teams have good players that come in and change the game, hopefully that can take us far.

“I think it’s massive [clinching a home playoff game]. Early on, [President and General Manager] Jay [Heaps] and Coach [Soehn] established with the owners that we don’t want to just be in the league and go to playoffs. We want to be hosting playoffs, we want to be the top seed in the playoffs, and that’s what we’re fighting for now is to finish top of our league in a tough conference. I think that says a lot about us and where we are. It’s been a long season, but three games left, and you couldn’t ask for anything else.”

Assistant Coach Khano Smith when asked about the team’s performance and a home playoff game:
“We’re in a really good spot right now with everybody being healthy and everybody contributing. You’ve got guys that are stepping up and it’s just a next man up mentality. I’m really happy for everybody; everybody’s a part of it. It’s a really strong group performance, and we’re going to need all of them to reach our goals this year.

Legion FC’s next match is on the road at OKC Energy this Sunday, October 17 at 5:00PM CT. Tune in to watch the match on My68 or ESPN+ or check out @bhmlegion on twitter for live match updates.

The team’s next home game is Sunday, October 24 at 4:00PM versus Sporting Kansas City II! Fans can get tickets HERE and can contact the Legion FC Ticket Office at 205-600-4635 or tickets@bhmlegion.com with any questions or requests.