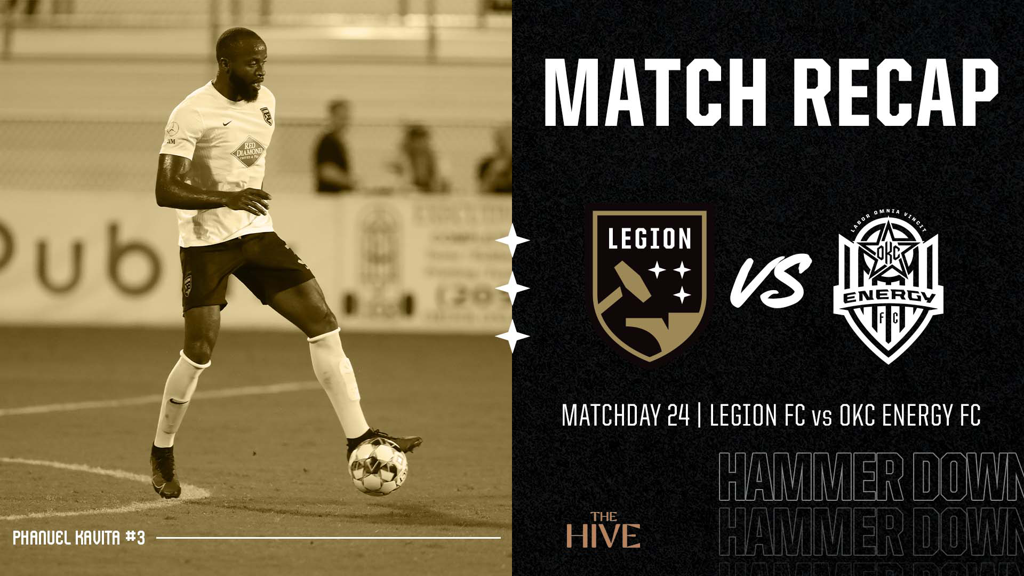 BIRMINGHAM, AL (Sept. 18, 2021) – Legion FC drew OKC Energy FC 1-1 on Saturday after OKC’s Villyan Bijev found the back of the net in the 39th minute and Mikey Lopez’s long-range attempt equalized in the 55th minute for Birmingham.

The home side came out flat in the first half, and the visitors held a four to two edge in shots and had 53% of possession going into the half. OKC also went into the break with the lead after Bijev, the team’s leading scorer, beat a couple Legion defenders, cut across the top of the box, and slotted the ball into the bottom right corner of the goal.

It was a tale of two halves for Birmingham who came out for the second half fired up and much more in control of the tempo of the match. After a period of possession for Legion FC, Lopez found himself on the ball on top of the left side of the opposition box before having a shot that slipped under OKC goalkeeper CJ Cochran and into the goal.

When asked about his team’s performance, Legion FC Head Coach Tommy Soehn said, “I’m just disappointed in the first half. Our soccer wasn’t good enough, and I said that with the broadcast. We were really sloppy, and you can’t work tactics if you can’t hold the ball. Second half I think we got a lot better at it, but you gave up a goal and now they’re holding on and bunkering even more and it’s hard to break teams down like that. Yet, we still had plenty of looks. Disappointed to lose two points at home.”

The second half tally ended with Legion FC attempting 14 shots to OKC’s six, but the home side could not find a game-winner. Birmingham forward Junior Flemmings unleashed a curling effort in the 59th minute that looked destined to land where the spiders live, in the top corner, but Cochran made a huge save, going full extension to knock the shot away.

Midfielder Bruno Lapa made his second appearance since returning from injury and created four key chances in just 35 minutes after subbing on.

“OKC got better throughout the season,” said Lapa. “It’s no mistake they are sitting in fourth right now, in a playoff spot, so we knew coming into this game that it was going to be tough, and we would have to bring our A-game tonight. Unfortunately, we let it slip in the first half. I think we weren’t ourselves and we didn’t play as well as we can, so I’m glad in the second half we did better. I thought we created enough chances to win this game, and unfortunately couldn’t capitalize, but hopefully we can build from it.

“It’s going to be a tough week [next week]. Atlanta is a young team that has a lot of quality players that can hurt you on any given day. Then facing a team [Charlotte] over the weekend that isn’t otherwise in our schedule is always a challenge because you just play them once, and we don’t really know much about them. From what it seems, checking all their games and things like that, it looks like they have a solid team again and have good players in the team, so that’s also going to be a tough game, but hopefully we take care of the job on Wednesday, and come back here to a home crowd, hopefully a lot of people come out and we have good weather, and we can hopefully grab six points next week.”

Legion FC heads back out on the road for a midweek clash at Atlanta United 2 this Wednesday night, September 22, at 6:30PM CT. Tune in to watch the game on My68 or ESPN+ or follow @bhmlegion on twitter for live updates.

The team’s next home match is next Sunday, September 26 at 4:00PM against the Charlotte Independence. Fans can get tickets HERE and can contact the Legion FC Ticket Office at 205-600-4635 or tickets@bhmlegion.com with any questions or requests.