The point means Birmingham remains in second place in the Central Division, two points ahead of Tulsa 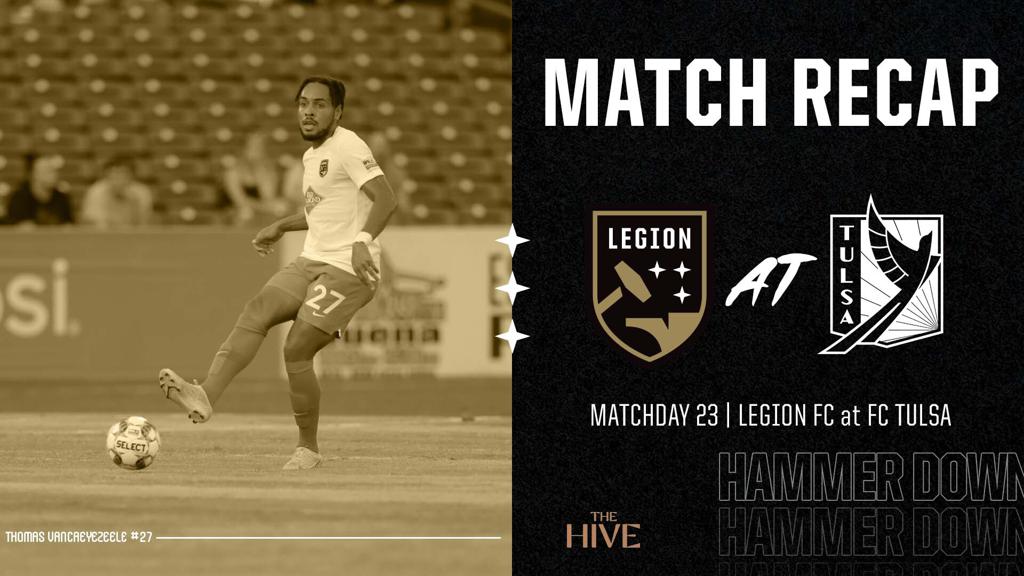 TULSA, OK (Sept. 11, 2021) – Birmingham Legion FC walked out on to ONEOK Field on Saturday night to play its third away match in a row, looking to see what the team was really made of after last weekend’s loss, and aiming to hold onto its spot in second place in the Central Division.

Tulsa scored a penalty kick in the first half, but after a JJ Williams goal in the second half, via a Mikey Lopez assist, and stout defensive work in open play from a slightly new look backline including center back Ben Ofeimu and goalkeeper Trevor Spangenberg, Legion FC left Oklahoma with a vital point in the push for the playoffs.

The first 45 was relatively evenly played, with the home side holding 51% of possession, and both teams firing off 10 shots. Legion FC’s best chances came from forward Junion Flemmings, who just rejoined the team after playing with Jamaica in CONCACAF World Cup Qualifiers. In just the fourth minute, Flemmings got loose in the box but pulled his shot wide, and in the 13th minute, midfielder Prosper Kasim played Flemmings in with a gorgeous through ball that broke the midfield and defensive line, but the first time shot went over the bar.

Tulsa opened the scoring in the 29th minute with a goal from Dario Suarez from the penalty spot. Birmingham defender Ryan James was whistled for bringing down Tulsa forward Jason Johnson in the box as Johnson was looking to get on the end of a cross, but the contact seemed to be embellished a touch. Either way, at halftime it was 1-0.

The visitors pressed the issue in the second half when looking for the equalizer, serving up another 10 shots to Tulsa’s four, and the substitute, Alabama native, Williams tied things up in the 80th minute. Lopez, who started the game in the midfield, and then moved over to left back in the second half when Williams subbed in for James, got onto the ball out left and swung in an inch perfect ball towards the top of the six-yard box, where Williams rose highest and snapped his header in off the right post.

When asked about his backline’s play tonight, Head Coach Tommy Soehn said, “It’s more about a team concept. I felt that we were hard to play through. That threw them [FC Tulsa] off their rhythm, and we were able to win a lot of balls and turn them into chances. Especially early, we had unbelievable chances that we have to put away.

“I give the guys credit today, we had a gameplan and they did a really good job of it. I feel like if we finish those chances early, then it’s a totally different game. Overall, though, I’m very pleased with the way they played. I feel like we should have come out of here with three.”

If Tulsa had held on for the victory, it would have jumped Birmingham into second place in the Central, and while the top four teams in the division earns a spot in the playoffs, and there are about ten games left in the season, only the top two seeds get to host home playoff games.

Soehn when asked about midfielder Bruno Lapa, who returned after recovering from a sports hernia to made his first appearance since July 3rd:
“He’s obviously had a long season of having to watch and recover. Anytime you come back you appreciate the game a little more. We’ve gone on this season and played, and he’s missed it. When you come back from something like that, and I know that feeling, there’s no better joy than doing what you love to do. It was good to get him some minutes. We’re looking forward to having him back when he’s totally fit and healthy."

The club’s next match is back home on Saturday, September 18 at 6:30PM at BBVA Field against OKC Energy FC. Fans can go ahead and snag tickets for 9/18 HERE and can contact the Legion FC Ticket Office at 205-600-4635 or tickets@bhmlegion.com with any questions or requests.