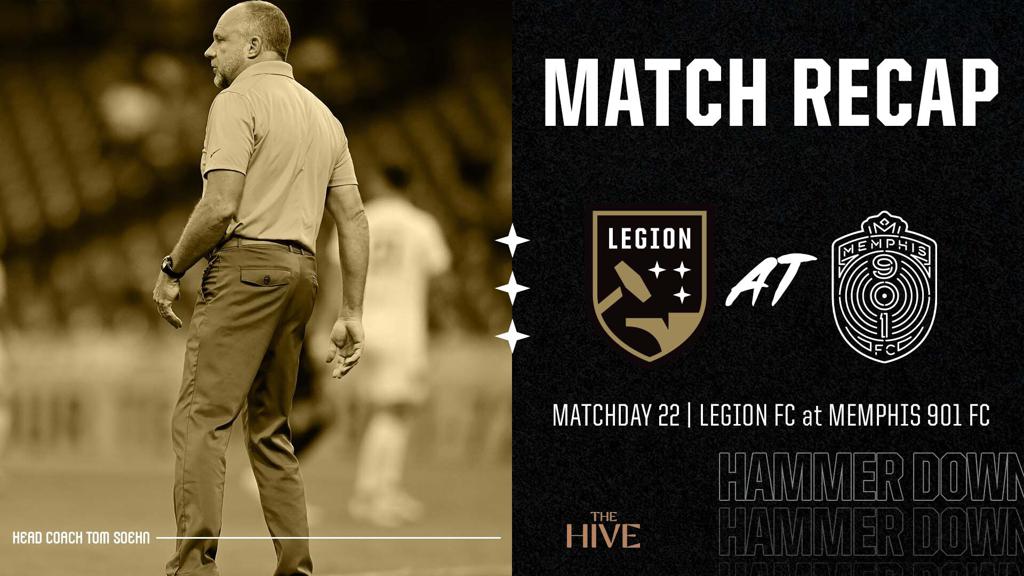 MEMPHIS, TN (Sept. 4, 2021) – Birmingham Legion FC was on the verge of securing all three points in its final trip of the season to AutoZone Park, thanks to a 42nd minute goal from Prosper Kasim and 78th minute goal from center back Alex Crognale, but three stoppage time goals by Memphis 901 FC, one in first half stoppage time and two, including a bicycle kick goal on the last kick of the game, won it for the home side in devastating fashion.

After a relatively even first half in which neither team created many dangerous attacking opportunities, Kasim scored in the 42nd minute of a match for the second time this week to give his team a 1-0 lead. Memphis’s center back attempted to head a ball back to his own goalkeeper without realizing Kasim had slipped in behind him, and the Legion FC forward pounced and buried the mistake.

Five minutes later 901 FC capitalized on a Legion FC mistake as well, as some miscommunication at the back, followed by a mishit clearance, left the Birmingham goal unattended and Memphis midfielder Laurent Kissiedou chipped the ball into the empty net from about 30 yards out to take things in to the locker room knotted up at one a piece.

A couple Memphis attempts were cleared off the line in the match, once by forward JJ Williams, and again by midfielder Thomas Vancaeyezeele to keep the visitors in it, and Birmingham jumped ahead thanks to Crognale’s head in the 78th. Left back Ryan James launched a long throw into the box that was popped up into the air, then midfielder Eli Crognale headed it back out to James, and the defender swung in a first time cross that Crognale rose to meet and bury for his first goal of the season.

Heading in to second half stoppage time it looked like the Three Sparks would be able to see out the victory and jump to first place in the division, but Memphis again found an equalizer, as forward Roland Lamah headed in a corner kick in the 93rd minute, and off of another corner kick in the 96th minute defender Raul Gonzalez produced a bicycle kick goal that found the top corner to grab all three points.

When Head Coach Tommy Soehn was asked about the end of the match, he said, “Not sure if there are any words that sum up that. I think if I take the whole performance, I was pretty disappointed in our quality of play, and I don’t even think it was really effort related, but it’s just our soccer wasn’t good enough. You find a way to still have a lead going in to the 90th minute, and give away something like that… I can’t even think back to any team I’ve ever been on that’s done that. So, those hurt. There’s no other way to say it.”

Legion FC wraps up this stretch of road contests looking for revenge in a match at FC Tulsa on Saturday, September 11 at 7:00pm. Fans can tune in to watch the match on My68 or ESPN+ or follow @bhmlegion on twitter for live updates.

The club’s next home match is Saturday, September 18 at 6:30PM at BBVA Field against OKC Energy FC. Fans can go ahead and snag tickets for 9/18 HERE and can contact the Legion FC Ticket Office at 205-600-4635 or tickets@bhmlegion.com with any questions or requests.