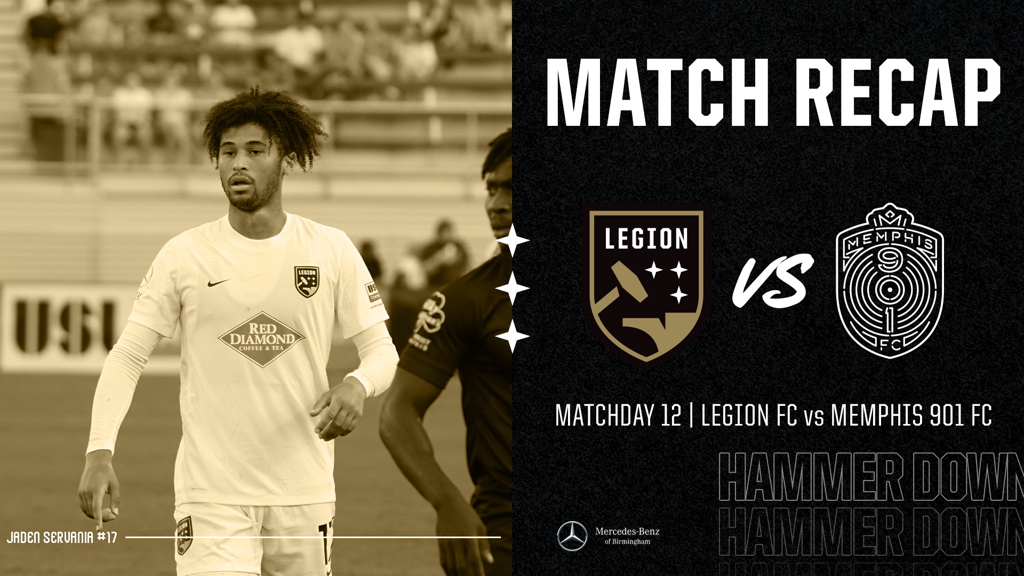 BIRMINGHAM, AL (July 10, 2021) – Birmingham Legion FC dropped a big opportunity to extend its lead at the top of the Central Division by losing 1-0 on Saturday at home versus rivals Memphis 901 FC.

Legion FC put up 17 shots in the match, to Memphis’s 11, but eight big saves by new Memphis goalkeeper Kyle Morton kept the home side from pay dirt. The visitors only managed one shot on target in the second half, but that one shot from forward Kyle Murphy found the back of the net in the 53rd minute. A Birmingham defender blocked a Memphis player’s shot in the box, but the rebound fell right to an on-running Murphy who took advantage.

Memphis came out the aggressor in the first ten minutes of the match, managing to get off a couple shots, before Birmingham worked their way in to the action and settled things down. Legion created a good number of chances in the first half, and held an edge in possession, but could not find the breakthrough. Two instances of what looked to possibly be a foul on the Memphis in their own box went uncalled as well.

After the goal early in the second half, 901 FC packed it in, conceding 72% of possession to the home team in the second half, and Legion peppered the opposing goal with 10 shots, 13 crosses from open play, and three corners, to no avail. Head Coach Tommy Soehn was disappointed in the lack of goals from his side.

“I think we were stifled,” said Soehn. “Never really got our mojo going. I thought Daigo added something to the attack, but it wasn’t our forwards best day, and you could tell, it reflected in the quality of the chances we had.

“I think that’s the discouraging thing is that we’ve really worked on our attacking patterns, and I really didn’t see them tonight. We’re going to continue to work on it and make sure that we enjoy a little break, even though it’s disappointing to head into that break with a loss. The guys have earned a break and we’ll come back and get back to work.”

Forward JJ Williams ended the match with five shots, Neco Brett had four, Prosper Kasim had three in 30 minutes of action as a sub, and right wingback Jonny Dean had six key passes on the evening. New signing Thomas Vancaeyezeele stepped right into the starting lineup after arriving in Birmingham on Thursday and ended up the three clearances, one interception, and an 84.4% pass completion rate, while Anderson Asiedu led the team in tackles with three and defender Alex Crognale was tops in clearances (four) and interceptions (three). Check out all of the stats from tonight’s match, and every match this year, in the Legion FC Match Center.

Defender Ryan James when asked about improving moving forward and the addition of Vancaeyezeele:
“I think chemistry is the biggest thing, just being on the same page. When we’re starting to connect and be on the same page with that kind of chemistry, I think more goals will come. We just have to make sure that we’re still vigilant with our defensive pieces and our defensive responsibilities throughout the whole team. Once we get that chemistry going, I think we’ll have a good flow to us and we’ll have a good back half of the season.”

“Only [talked to Vancaeyezeele] a little bit before he got here. He tried to surprise me but nope, he can never surprise me. I have eyes in the back of my head. It’s great to have him, though, great consistency in the back defensively. He’s got great technical ability and I think he’s solid on the ball. He’s a great addition, for sure.”

The Black and Gold get a bit of a break following Saturday’s match, as the next game is not until Saturday, July 24, at Indy Eleven. Tune in on My68 and ESPN+ to catch all the action!

The team will return to BBVA Field to host Atlanta United 2 on Saturday, July 31, at 6:30 PM. Tickets are available HERE or by contacting the Legion FC Ticket Office at 205-600-4635 or tickets@bhmlegion.com.