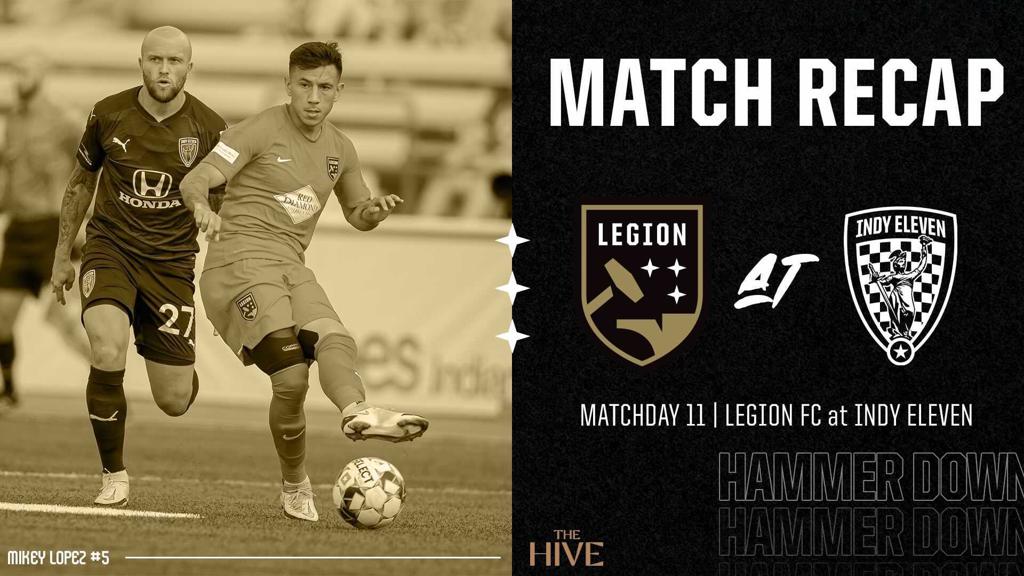 INDIANAPOLIS, IN (July 3, 2021) – Birmingham Legion FC earned its fifth 1-0 win of the season on Saturday night, this time at the expense of the Indy Eleven, courtesy of a Neco Brett penalty kick goal in the 8th minute of the contest.

The goal was Brett’s eighth of the season, which brings him up to a tie for second place in the USL Championship. After a ball was played in over the top, forward JJ Williams was wrestled down in the area by an Indy defender to draw the penalty, which Brett decisively buried into the bottom left corner of the net.

The clean sheet was Birmingham goalkeeper Matt VanOekel’s fifth of the season in just 11 matches, which is tied for first the USLC, and with three clutch saves on the evening, his 38 this year are second-most in the league. MVO’s backline was strong on the road, as captain Phanuel Kavita and one his center back partners, Alex Crognale, led the team in clearances with five, while left wingback Ryan James was first in interceptions with four.

Legion FC came out pressing aggressively to begin the game and were successful all night in turning mistakes by the home side into quick offense, as evidenced by Brett and Williams tying for the team lead with three tackles in the game. When asked about the shutout, Assistant Coach Khano Smith said defending is a full team effort, starting from the front.

“You know Indy are a really good team,” said Smith. “They’re really good with the ball, especially the second half they had a lot of the ball. We just had to dig deep and protect the win. I think everyone, and it starts from the front line to the backline, right through the midfield and down to Matt [VanOekel], everyone was good. They did their part and dug deep when they really needed to.”

Defender Ben Ofeimu had two clearances, one tackle and one interception while playing on the right side of the back three in the game, and when asked about the team’s performance this season said, “I think we have gelled so well because of good communication from everyone in the group. We all help everyone out. Phanny [Kavita] is a leader, so is Alex [Crognale], a veteran guy, so with me coming into the team, and Ryan [James], the transition has been smooth because of all the help we have gotten.

“Coming to Birmingham has been good. It’s always good to win, and obviously it feels even better when you’re on the field. So, you know, just to get those minutes and keep learning, I feel like I’m learning something every game. The team helps me a lot, and it’s been really good off the field and on the field. Everything has been great.”

Legion FC returns to BBVA Field for its next home match on Saturday, July 10, at 6:30PM against rivals Memphis 901 FC! Get your tickets HERE.