Legion FC returns to BBVA Field on Sunday, June 6, for first ever meeting with FC Tulsa 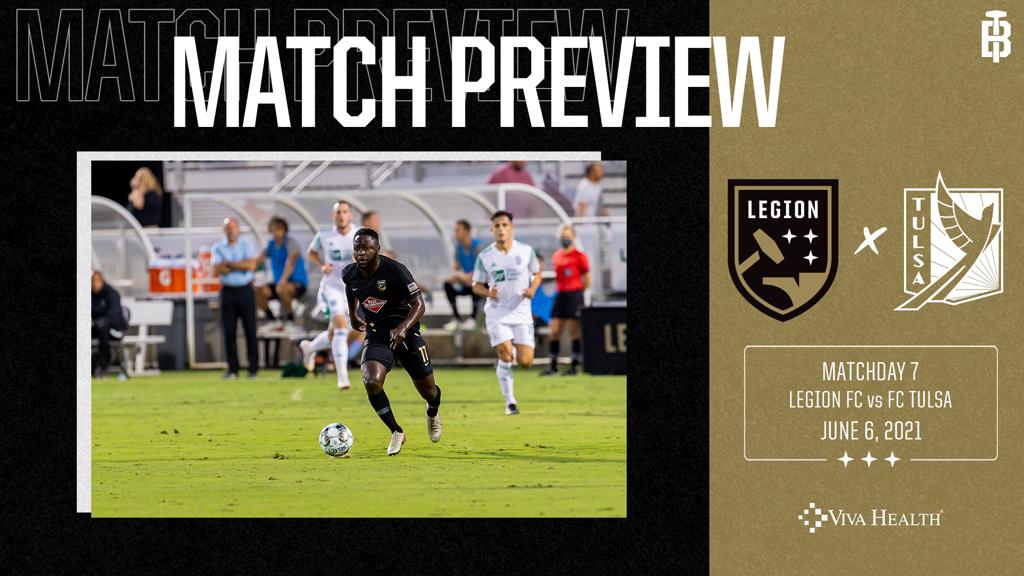 Birmingham Legion FC return home to BBVA Field this Sunday, June 6 at 4:00PM to take on another Central Division challenger in FC Tulsa. Legion FC will look to continue its quality form, coming off a game-winning penalty to win 1-0 on the road against Atlanta United 2 and another 1-0 shutout victory in its last game at home versus OKC Energy.

Forward Jaden Servania made the run into the Atlanta penalty area that led to him being fouled after combining well with Ryan James on the left side at the end of stoppage time. Midfielder Bruno Lapa stepped up and converted the game-winning take, securing three points for his side.

Thanks to a recent run of strong performances, Lapa was named the USL Championship’s Player of the Week for Week 6 with 53% of the vote after scoring the game winners in BHM’s previous two matches. Birmingham have found success playing through Lapa in the midfield, and will call upon his creativity this weekend as the midfielder ranks third in the USLC with 13 created chances in only six games.

With the shut-out win against Atlanta United 2, Legion FC tallied its third clean sheet in its last four games. This now puts goalkeeper Matt Van Oekel atop the pile for first in the league with three clean sheets, earning him a nomination for USLC Player of the Month for April/May. He's also tied for third in the league in saves with 17.

In addition to this stout defense, Birmingham’s attack continues to threaten as it comes into the weekend second in the USLC with 82 shots taken. Additionally, the Black and Gold are joint-first in the Central Division with 10 points. Legion FC is proving to be a force on both sides of the pitch and will hope to keep their form against FC Tulsa, who sit just behind in third with nine points.

Tulsa started the season hot with three consecutive victories and only one goal allowed. However, their last two games against division rivals Atlanta United 2 and Sporting KC 2 ended in 5-0 and 4-1 losses, respectively. Two key Tulsa players will be out Sunday on international duty, as forward Joaquin Rivas is with El Salvador and defender Jorge Luis Corrales with Cuba. Rivas is Tulsa’s leading goal scorer with four goals in as many games, while Corrales has provided the most assists (2) and chances created (7) for his side so far.

With a quick turnaround after their last match against Sporting KC on Wednesday, Sunday’s match in Birmingham sets itself up to be the biggest of their season so far. While Tulsa comes to BBVA Field on the back foot, count on them to make things difficult for Legion FC as the Oklahoma-based side looks to get back on track.

Midfielders Mikey Lopez and Prosper Kasim are both listed at questionable to play on this week’s VIVA Health Injury Report, while midfielder Jaden Servania will be unavailable as he is on international duty with Puerto Rico.

The Black and Gold hit the road for their next two matches, as they travel to take on OKC Energy FC on Saturday, June 12 and Louisville City FC on Wednesday, June 16. Tune in to both matches on My68 or ESPN+.

Legion FC will return to BBVA Field on Saturday, June 19 at 6:30PM to take on Austin Bold FC. Tickets are available HERE or by contacting the Legion FC Ticket Office at 205-600-4635 or tickets@bhmlegion.com.