Legion FC Grabs Win at the Death Against Atlanta

Jaden Servania earned a stoppage-time penalty, Bruno Lapa buried it to earn their side all three points 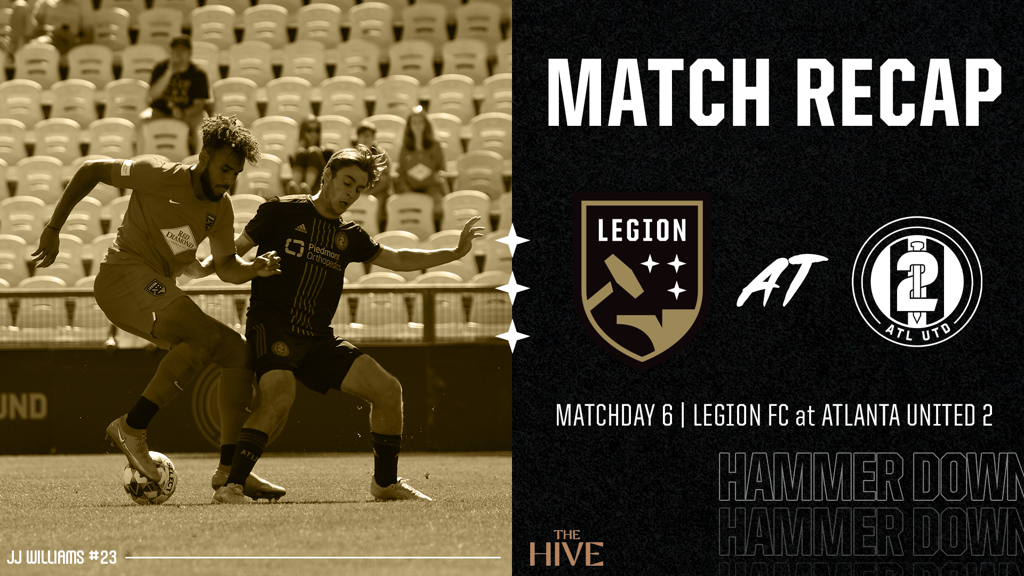 KENNESAW, GA (May 30, 2021) – Birmingham Legion FC withstood Atlanta United 2’s early pressure, stayed organized all day, piled on the shots, eleven of them actually, in the second half, and came away with a 1-0 win thanks to a stoppage-time penalty kick goal from midfielder Bruno Lapa.

Atlanta was up for it from the opening whistle, holding a 62% share of possession in the first half, and matching Birmingham’s five shots that frame, but neither team could find the back of the net early. Despite playing its third match in eight days after a midweek tilt against OKC Energy FC, Legion ramped it up in the second half, ripping off those 11 shots to ATL’s four, and forcing some fine saves out of Two-nited goalkeeper Rocco Rios Novo.

The breakthrough opportunity came courtesy of substitute attacker, 19-year-old, Jaden Servania, who came on in the 70th minute. A long ball over the top found Servania and he streaked in behind the stretched-out Atlanta back line, all the way into the opposing box, where he was fouled and earned the penalty. Lapa stepped up and scored his second goal in as many games for the visitors, expertly placing his shot into the bottom righthand corner of the net.

Legion FC Assistant Coach Khano Smith said that even thought it is still early on in the season, it was key to get a good result against an unbeaten Atlanta team and jump them in the Central Division standings. He said, “It’s important because Atlanta is an important team to stay close to in the table and jump them,” said Smith. “Obviously, it’s good to stay at the top of the pack rather than at the bottom, because if we would have lost this game, they would have pulled away from us and I’m sure other teams would’ve pulled away from us. So, it was good in that aspect as it keeps us toward the top of the group.”

Legion FC also earned its second shutout in a row, without goalkeeper Matt VanOekel having to make a single save. The back three of captain Phanuel Kavita, Ben Ofeimu, and Zach Herivaux on the day stood in the way of any attack ATL could muster, with tireless help from wingbacks Jonny Dean and Ryan James, as well as midfielders Anderson Asiedu and Eli Crognale. Filling in at the back in his first start for BHM in two years, Herivaux led the team with seven clearances, and James stepped up with two tackles and five interceptions.

Midfielder Jaden Servania when asked about his late run to earn the decisive penalty:
“Coming off the bench, Coach [Soehn] is always giving me the best of luck and telling me to do what I do - to work hard and the rest will come because I have the ability to play,” said Servania. “Just being able to make that run down the line and draw the foul felt great to help out the team, and then Bruno finished it, so great team win from the guys.”

The squad returns home to BBVA Field on Sunday, June 6, at 4:00PM for a clash with another new Central Division opponent, FC Tulsa. Tickets are available HERE or by contacting the Legion FC Ticket Office at 205-600-4635 or tickets@bhmlegion.com.