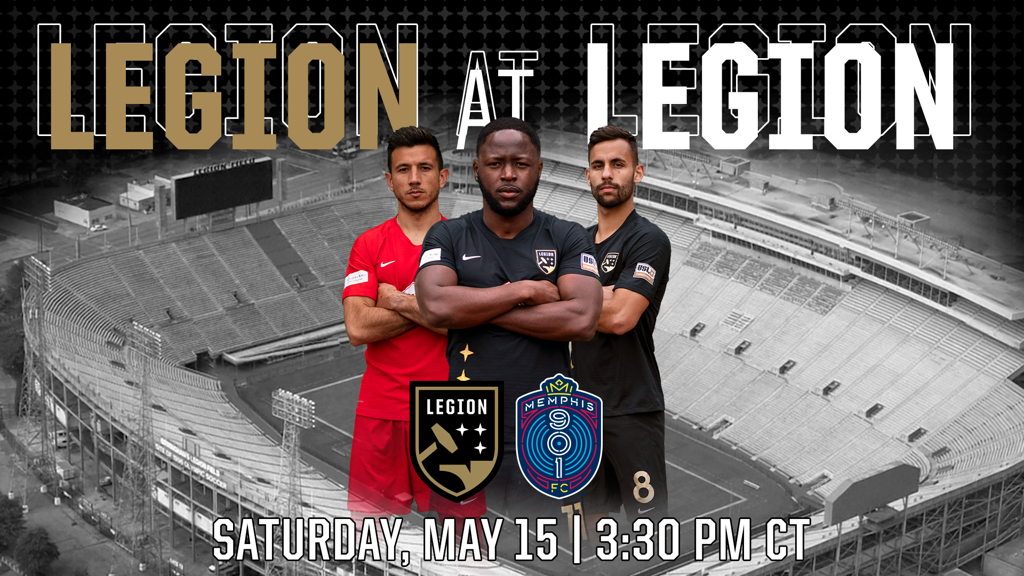 BIRMINGHAM, AL (May 10, 2021) – Birmingham Legion FC announced today that this Saturday’s match versus Memphis 901 FC has been moved and will be played at historic Legion Field, with kickoff scheduled for 3:30pm CT.

With support from Mayor Randall Woodfin and the City of Birmingham, as well as City Council President William Parker and the Birmingham Parks and Recreation Board, ‘Legion at Legion’ aims to be an event that highlights the best of Birmingham coming together and will be a day for all of the Magic City’s residents to enjoy.

“We would like to thank President Parker and Mayor Woodfin for making ‘Legion at Legion’ a possibility,” said Legion FC President and General Manager Jay Heaps. “Having a game like this on such short notice truly demonstrates the Birmingham community working together.  We are excited to play against our rivals from Memphis in front of all of our fans this Saturday at Legion Field.”

Tickets for the match are just five dollars, and will be available at bhmlegion.com, and anyone that gets their COVID-19 vaccine at the Legion Field vaccination site any day this week will receive a ticket to Saturday’s game. The vaccination site is open from 10am to 6pm Monday through Friday, and walk ups are welcome.

“We are thrilled to extend a warm welcome to Legion FC and Memphis 901 FC, to Legion Field Stadium," said Parker. "The experience of playing in this historic venue is going to be unlike any other for the teams and fans. In February 2020, we began a partnership with the Birmingham Legion FC for a fan experience to kick off their second season and we’re excited to further showcase the strength of the sports community within Birmingham. We're finally bringing the Legion to Legion Field."

“The cooperative spirit which brings Legion to Legion demonstrates the essence of the Magic City,” said Mayor Woodfin. “There’s no better way to host Legion FC at Legion Field than through the rivalry with Memphis. Legion FC’s commitment to excellence and delivering high-level professional soccer to our city is only matched by its dedication to community. We celebrate this return of soccer to Legion Field and look forward to a great match on Saturday.”

Saturday’s match against Memphis, kicking off at 3:30pm, will be the first contest of the season between the two rivals in the USL Championship’s Central Division. While Legion FC leads the all-time series with two wins, three draws, and just one loss in six meetings, Legion will look to avenge a late season defeat in Birmingham at BBVA Field last October, the last time these two sides squared off.

“We have also been working closely with UAB Facilities and UAB Athletics this past week and are encouraged by the progress being made to address the current field conditions at BBVA Field,” said Heaps. “Collectively, we have made the decision to protect the field and play this game at Legion Field.

BBVA Field is an excellent venue, and we look forward to the rest of our season and continued partnership with UAB Facilities and Athletics. Importantly, we are pleased with the responsiveness and mutual commitment to our partnership, and we appreciate the efforts being putting forth to improve the field for Legion FC and for UAB Women’s and Men’s soccer teams.”

Any questions about the event can be directed to Legion FC HQ by emailing either info@bhmlegion.com or tickets@bhmlegion.com, or by calling 205-791-7145, and more venue-specific information can be found HERE. Fans are encouraged to keep an eye on bhmlegion.com and @bhmlegion on social media channels for updates throughout the week as we get closer to ‘Legion at Legion!’