Indy goal in 29th minute proves to be the winner; BHM heads to Louisville next Saturday 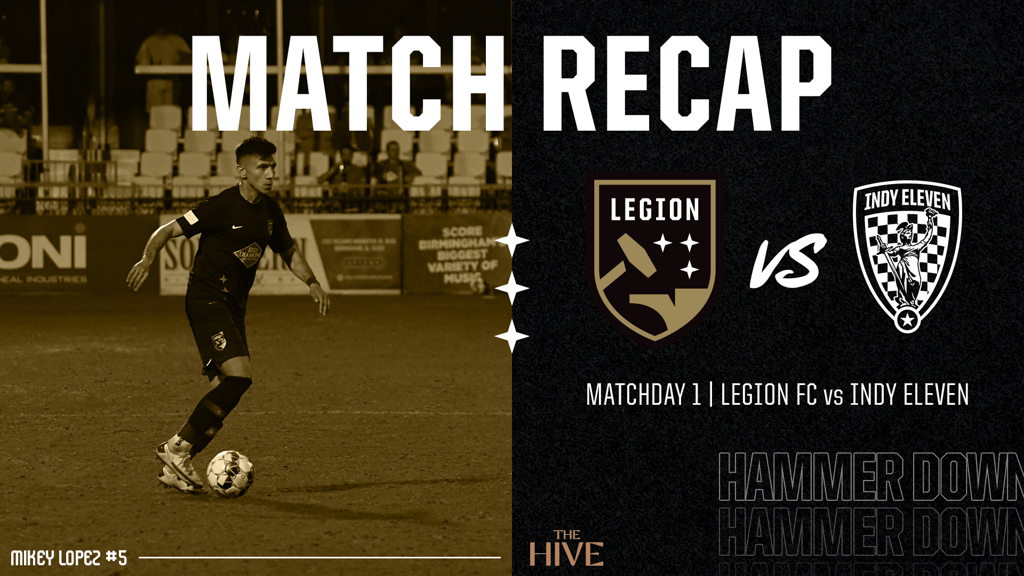 The visitors, also playing their first competitive match of the season, took all three points from the contest thanks to a goal in the 29th minute from newly-signed forward Manuel Arteaga. After getting down the left flank, Indy cut the ball back to the top of the box, and Legion FC goalkeeper Matt VanOekel made a diving, point blank save to keep the first shot on goal, but Arteaga put the rebound into the back of the net.

Birmingham outpaced Indy in possession, passing accuracy, total shots, and shots on target, but were unable to best Indy goalkeeper Jordan Farr on the night. The playing surface also made it difficult for either team to get into much of a rhythm, however, and neutralized some of Legion FC’s speed on the wings.

In an official club statement, Legion FC President & General Manager said, “We are extremely disappointed with the condition of the field tonight. We were assured by the UAB Athletic Department and UAB Grounds Crew that the field would be ready for the first game of the season after transitioning the surface from rye grass to bermuda grass. Unfortunately, the field was not ready and nearly unplayable. Without making excuses about the field’s impact on the result, as a professional soccer team and partner in this community, our players, opponents, sponsors, and fans deserve better from the UAB Athletics Department as we, and BBVA, have invested in this stadium and campus. We are disappointed and feel let down as this situation put both teams at risk.”

Head Coach Tommy Soehn on the result, and the play of two new signings in defense, Phanuel Kavita and Ryan James:
“I felt like we lacked the quality, especially in the attacking aspects -to the final pass or the pass to break the lines. I thought we played really conservative, and you can't afford to do that. Especially when we win the ball, we have to be more precise and more direct and get after it. To credit them, they complicated things and made it tough in the middle of the park. There’s a lot to learn from this and a lot to take and hopefully we’ll come out better.

“I thought [Kavita and James] did a really good job. To be fair, we didn’t give them a ton of looks, but we gave them one that cost us. Overall, like I said, we still have things to work on and it showed tonight. I don’t think the game was that one sided either way, but you’ve got to come out with wins at home. So, it’s not the right way to start out the season, but we’ve got a long way to go and we’ve got a lot of time to fix it.”

#3 Phanuel Kavita on the result and on playing in his first competitive match at BBVA Field:
“Defensively, I thought we did well. I think we were a bit disorganized especially early on and during the second half. I think defensively we didn’t give them anything, but I think we could’ve done a better job going forward. I think we gave away too many cheap balls to allow them to run at us. I don’t think we played at our best, but it’s a long season and there’s a lot of positives to take from it so we’ve just got to keep our head down, keep working hard, and keep moving forward.

“[The BBVA Field atmosphere and crowd] was fantastic. I think the fans really came out tonight. Unfortunate that we couldn’t give them a result, but that drives me and the rest of the guys to keep putting on a show. The more fans we get, the more energy we bring out for them. It was fantastic, I enjoyed it. It’s good to be here, I’m very competitive, I want to win regardless of anything so it’s tough for me right now.”