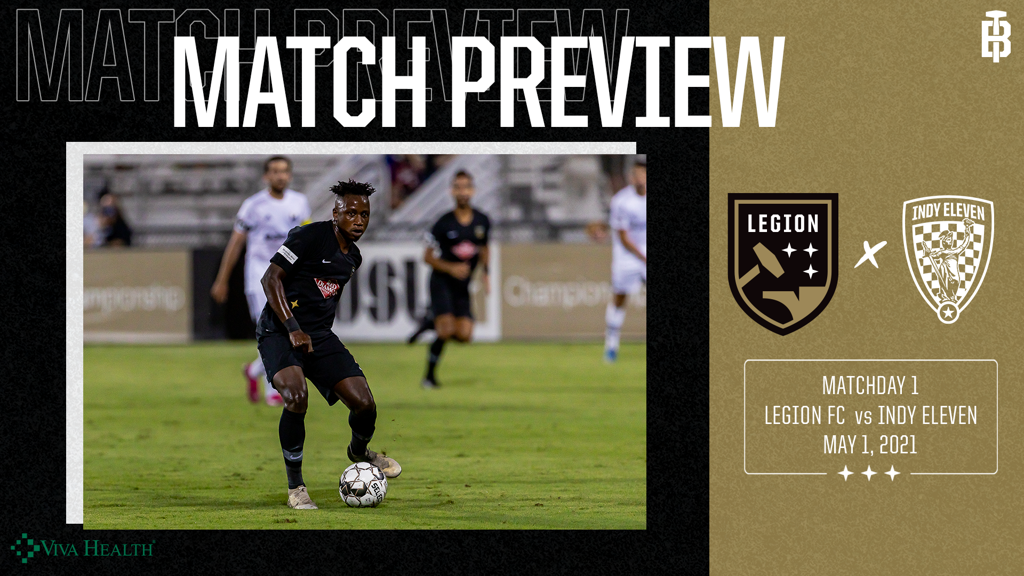 Legion FC returns to BBVA Field this Saturday, April 30, to kick off its third season in the USL Championship. The Black and Gold face off against Indy Eleven at 6:30PM CT in what will be the third ever meeting between the two sides, with both teams holding a win over the other.

The last time Birmingham and Indy met, BHM earned three points at home with a 1-0 win. The result came in Legion FC’s first season in the USL Championship, so this meeting between the two clubs will feature a new look side on both ends of the pitch compared to the ones which fans saw in 2019.

The Black and Gold’s depth going forward will come in handy to start the season, as the aforementioned Flemmings will be unavailable for Head Coach Tommy Soehn in his sides first two matches; the Jamaican International has two games remaining on his six-game suspension incurred at the tail-end of last season. Flemming’s fellow countryman Neco Brett, though, leaves no room for a sigh of relief on Indy’s end. Brett led Legion FC in goals scored last season with nine goals in 16 matches played, a tally he will hope to better heading into a full-length season.

Legion FC’s first opponent in 2021, from the newly-minted Central Division, is Indy Eleven. Indy returns just six key contributors from its 2020 squad, including All-League standout Neveal Hackshaw and his steady partner at centerback Karl Ouimette. Along with fullback/wingbacks Ayoze and Carl Haworth, as well as returning goalkeeper Jordan Farr, Indy looks to be strong at the back. Where Indy enters the unknown is going forward, as the departure of All-League forward Tyler Pasher to MLS’s Houston Dynamo leaves a large role to be filled for Head Coach Martin Rennie. Some of the most notable signings for Rennie at the forward position are Jordan Hamilton, Manuel Arteaga, and Peter-Lee Vassell. Hamilton, a two-time MLS Cup winner with Toronto FC in 2017 and Columbus Crew SC, and Arteaga scored a combined six goals throughout Indy Eleven’s preseason campaign, a run of form they will look to continue heading into Saturday. Vassell, who has six goals in 17 appearances for the Jamaican National Team, is a late add for Indy, but one that will look to make a quick impact for his new side.

Birmingham heads into the season following an appearance in the USL Championship Playoffs Eastern Conference Quarterfinals, a match that saw BHM fall 4-2 to eventuals Eastern Conference title winners the Tampa Bay Rowdies. After two playoff berths in each of the club’s first two seasons, Head Coach Soehn and his side enter the 2021 USL Championship season aiming for more.

"Well we haven’t had a home playoff game, so that’s first and foremost,” said Soehn following Legion FC’s pair of friendlies against MLS side Atlanta United. “Playoffs isn’t even a thing anymore, we have to make the playoffs.”

Midfielder Zach Herivaux is the only player on this week’s VIVA Health Injury Report, as he is out with an ankle injury. Forward Junior Flemmings will be unavailable for the match, serving the last two games of his six game match ban incurred at the end of last season.

Legion FC returns home for season number three on Saturday, May 1 vs. Indy Eleven at 6:30PM. Tickets are available at bhmlegion.com/tickets or by calling the Legion FC Ticket Office at 205-600-4635, and the match will air live on My68 and ESPN+.