For Anderson Asiedu, 2021 is All About the Vibes (and Winning too)

From Ghana, to LA, to Birmingham, Legion FC’s #6 has remained focused on his goals 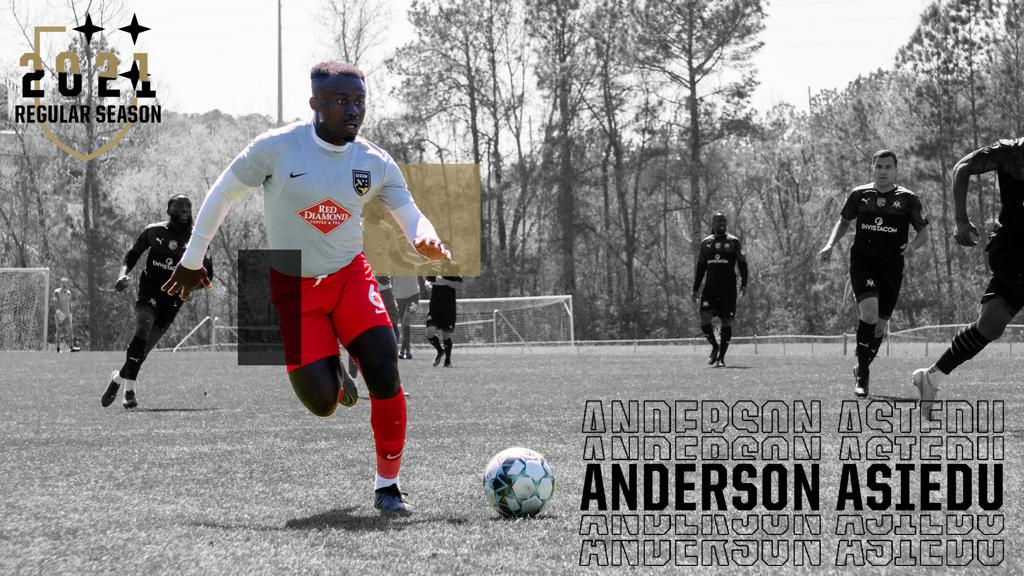 BIRMINGHAM, AL (April 6, 2021) – Anderson Asiedu has established himself as half-part wrecking ball, half-part anchor at the base of the Legion FC midfield across his 30 appearances the last two seasons, and the Ghanaian thinks the sky is the limit for his team in 2021.

It’s been about a month since you guys kicked off preseason. How’s training going?
“So far, so good! Good energy, all positive, you know? Training has been great. The energy is very positive and is very great so far. It’s been very fantastic. Everybody is ready to work, everybody is excited for the year, you know we have some good, experienced guys, and fun guys to play with, so everybody is excited. Training has been great so far.”

How’d it feel to play against Atlanta again, especially since you played with them for a while and know some of those guys?
“It was an amazing feeling. Everybody was ready for the game because it’s just another opportunity to showcase ourselves against an MLS club. The energy from the fans helped too, you know, first time in a while we got to play in front of that many fans, so it was just an amazing feeling. Plus, for me, I know some of those guys on the team, so it was also a good way to prove myself to my former team - to show what I’ve got, you know what I mean? So, it was all good, a good feeling, good energy, back at home playing against them, and we showed and proved on the pitch for everybody to see that we’re ready and excited about this year.”

Before Atlanta you were at UCLA, right? How was your college experience?
“Man, it was amazing. I transferred from Monmouth to UCLA in the fall of 2017, so I spent two years there, and it was amazing because it was all different weather, a different world going from New Jersey to LA. The weather was great, the school was amazing, so I knew that that’s where I needed to take my opportunity, enjoy it, make the most out of it, and hopefully make it to the next level. I took advantage of it, played well, and had a great, fun experience there.

It’s a great school, great program and players, so it was just an amazing time. All that was just getting me closer to see what the next level up will be like, so I was just trying to enjoy it and work hard, because you know if you do well here, the next opportunity will come from somewhere else. So, I enjoyed my time and worked hard, because I wanted to have the better way out of it at the end of the day and make it to the pros.”

Did you get to catch much college basketball during your time at UCLA?
“Yes, I was a college basketball fan, and it was a great game on Saturday [against Gonzaga in the Final Four]. It was a joy to get most people who aren’t UCLA fans to see that champions are made out there! Their spirit was great, and it was a good game. I loved it. I watched and was rooting for them, but sometimes it’s part of the game you know, you win some, you lose some.”

Can you explain how and when you moved to the US? What was high school like for you?
“I moved to the US because a coach [Sylvers Owusu] from St. Benedict’s Prep, in Newark, NJ, came to Africa to visit. He’s actually from my district there in Ghana [Dormaa Ahenkro], and was the coach at St. Benedict’s, so he came to watch a bunch of us play, and he picked me. I got here [to New Jersey] my junior year of high school. While I was in school, I made friends with a kid there and his family became my host family, so I stayed with them that summer and they became part of my family and I became part of theirs. They come to a lot of our Legion games now. After high school I went to Monmouth, but after two years there I realized I needed to elevate my game and move up a level so that’s when I went to UCLA.”

Was coming to BHM made easier by Ghanaian guys like Prosper being here? Did you know anybody on the team before you got here in 2019?
“Before coming to Birmingham, the only time I’d been here was coming to play against Legion with Atlanta [United 2]. One thing that made it fun was I knew [Eddie] Opoku from college. I’d gone to Columbus to visit and for an opportunity to train with the Crew, so that’s how I knew him, and when I was coming here Opoku said ‘they have another Ghanaian guy here’ and that was Prosper. I said ‘Nice, nice, nice, nice,’ and then when I got here we all kind of vibed out and hung out with each other.

But, before coming here, I was excited. I wanted to get to a place where I could establish myself and improve my game. I was kind of passed over by Atlanta, so I wanted to come somewhere I could prove my worth. That was kind of my mentality. And I feel like I’ve done that, so I’m excited. Everybody likes me here and people look up to me. I’m really enjoying my football career, three years in. I came somewhere where everybody loves me, and I get to do what I love to do.”

Who else are you close with on the team now?
“Now I’m close with everybody! I’m close now with Phanny [Phanuel Kavita] and Ryan James too, just trying to create some experienced leadership with the defenders, so that we can create a lot of connection between me and them and Mikey. Everybody wants to just vibe out with everybody because we have experienced guys that we connect with during the games and help each other. Phanny, since he came, I wanted to help him feel comfortable and at home since I’ve been here for three years now. I wanted to make sure he felt welcome. I’ve also played with Junior for [New York] Red Bulls [under-23 team], so Junior and I know each other very well too from when I was in college. Me and Junior have a good connection too. We always want to enjoy each other and do something great together, so I vibe with most of the guys. We’re all enjoying each other’s vibes.”

Added Phanuel, Ryan, Junior – how do you feel like the team is going to perform this year?
“Man, I feel like we’re a championship contender this year. I really feel like we can win a championship with the type of quality that we have. Our backline is solid, and through the midfield to the forwards everybody is connected, and we have a deep team, a deep bench. People are going to be able to come in and make a difference anytime. I was very excited to add those new guys and JJ [Williams], plus [Zach] Herivaux, because, you know, Zach and I are cool from when he played here that first year [in 2019], so it’s good to have him back here to do business again this year. He’s a good player, so playing around good players helps you better your own game and helps us win lots of games as a team.

So, I feel like year we’re going to win a lot of games, compete at a high level, and compete for a championship. That’s the goal. Three years is enough to build, and we have to go in harder now with the team we have. We have showed a bunch of talent these past two years, and I feel like now this is the time for us to say, ‘Enough is enough, let’s go win this s—t,’ you know?”

Anderson and his Legion FC teammates kick off their third season in the USL Championship with a match at home, versus Indy Eleven, on Saturday, May 1, at 6:30PM. Season tickets are available now, as well as single game tickets for the first few home matches of the year. Fans can download the full season schedule straight to their preferred calendar here.