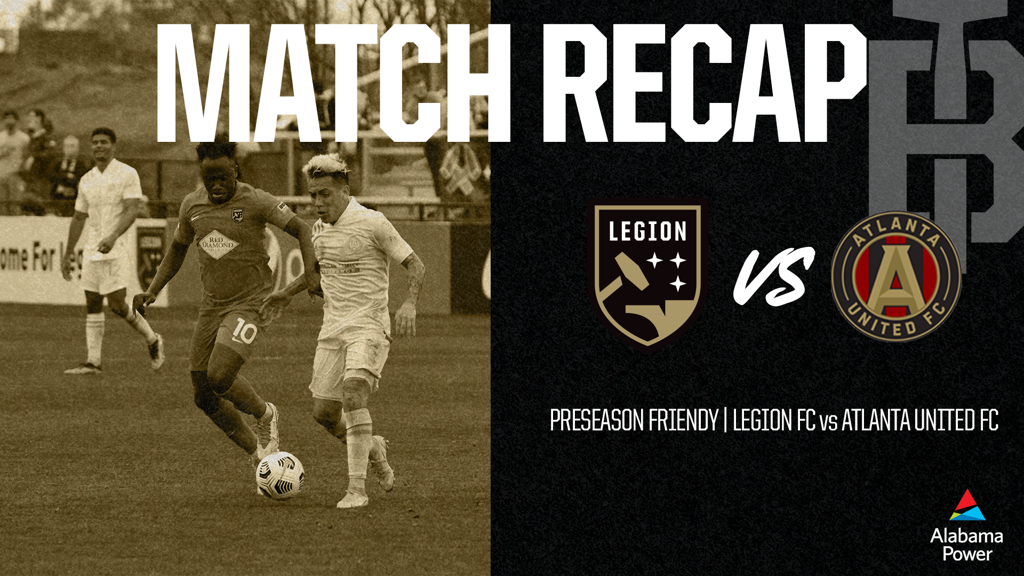 BIRMINGHAM, AL (March 28, 2021) – Birmingham Legion FC kicked off its third season in the Magic City on Sunday with an exciting double-header at BBVA Field against MLS-powerhouse Atlanta United FC.

Atlanta made the trip to Birmingham for the second year in a row, as both teams get ready to round out preseason. Legion FC ran out a strong starting line up in the first game of the day, as newcomers Phanuel Kavita, Ryan James, and Junior Flemmings got a first glimpse at fans in-stadium at BBVA Field, and an attack led by Neco Brett, Bruno Lapa, JJ Williams, and Flemmings racked up more shots and clear chances than the visitors but could not find the back of the net.

Atlanta’s first group, led by Josef Martinez and Ezequiel Barco, forced Legion FC captain and goalkeeper Matt VanOekel into a couple big saves, and defender Jonny Dean blocked a shot off the line to preserve the home team’s shutout. When Legion FC Head Coach Tommy Soehn was asked after the match, he said he was pleased with his side’s effort.

“We were solid in the way we pressed, and our shape was really good defensively,” said Soehn. “The only part we lacked was the quality at the end when we forced turnovers and putting it into the back of the net, of which we still have to work on. I was really pleased, though, with the majority of the other things this early in the year against a quality team.

When asked about the team’s goals for year three, he said, “Well we haven’t had a home playoff game, so that’s first and foremost. Playoffs isn’t even a thing anymore, we have to make the playoffs. Something else I’d like to touch on is that I think we’ve got a lot more depth this year. We don’t have everybody in yet, but once we have everybody in, I think we can weather some of the tough stretches of the season, and I don’t think it falls off much because of our depth. I’m excited for that part of it too. Today some of the guys were missing but once everybody is here, I think it’s all positives to come.”

The second match of the day saw full-scale substitutions from match one’s lineups, and Legion FC’s got a good look for the 70-minute scrimmage at a number of players on trial with the club, as well as a handful of youth products from the Legion FC Academy team. Atlanta had the majority of the chances in the second contest, hitting the post twice and finding the back of the net, via the foot of defender Anton Walkes, for the day’s lone goal in the 33rd minute.

James and Legion FC defender Alex Crognale were both proud of the defensive performance on the day and were excited to get the regular season rolling.

It’s been the first time this preseason really where we’ve been tested as a back four, and I thought we showed really well,” said Crognale, Legion FC’s 2020 Defender of the Year and All-League Second Teamer. “The positioning, the communication, we were really solid for our first time out. To play against a team like Atlanta United, with the attack they have, it just gives us confidence moving through preseason, and we’re excited to continue to build.”

When asked about how his first month in Birmingham has been, James said, “It’s been great. Guys on the team are great and everyone is starting to gel on the field and off the field. You’re starting to figure out personalities and I think everyone’s just excited for the season to start. The games are starting to come, fans are excited, players are excited. Everyone’s excited to give the fans and the people of Birmingham what they’re expecting in the season.”

The 2021 USL Championship regular season kicks off in Birmingham on Saturday, May 1, at 6:30PM. Season tickets are available now at bhmlegion.com/tickets or by calling the Legion FC Ticket Office at 205-791-7145, and the full season schedule is set to be announced this week!

For all club news and updates, like upcoming signings or the release of the 2021 USL Championship schedule, be sure to follow @bhmlegion on social media and keep an eye on bhmlegion.com and the Legion FC app. Download the Legion FC app today on Apple or Android!