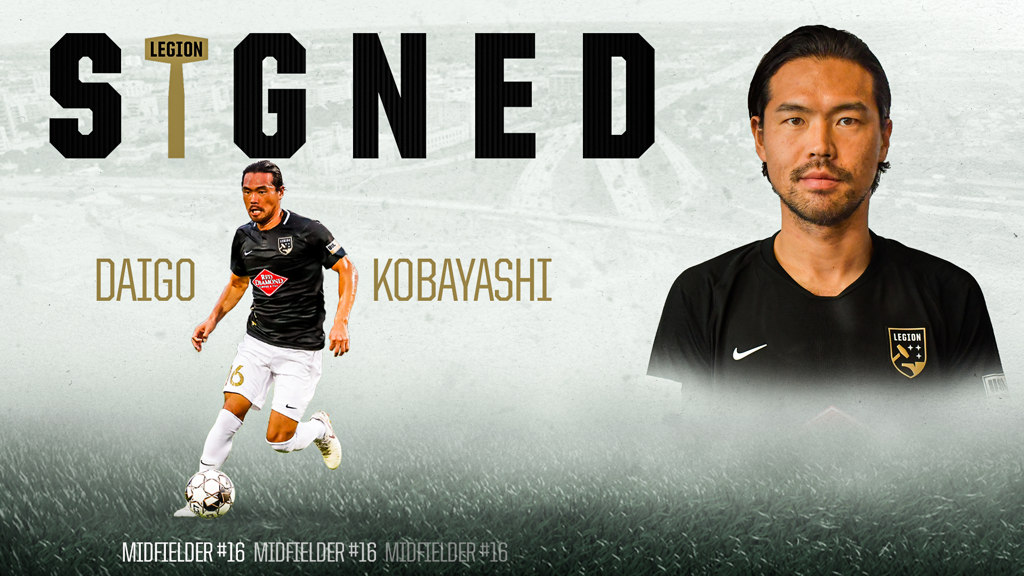 “As an experienced, true professional, Daigo helps lead our group on and off the field,” said Jay Heaps, Legion FC President and General Manager. “He is someone that Coach [Tommy] Soehn and I have worked closely with for a long time now, and he leads by example with his work on the field, in training, and around the locker room.”

Kobayashi joined Legion FC for the club’s inaugural season in 2019 and across the past two seasons made 34 appearances, racking up four assists, 13 shots, 14 chances created, 10 clearances, 26 interceptions, and 29 tackles while completing 86% of his passes. He spent 2018 with fellow USL Championship team Las Vegas Lights, where he made 34 appearances, scored four goals, and added three assists.

The Japanese international came to the United States in 2013 to play in Major League Soccer for the Vancouver Whitecaps FC in 2013, appearing in 32 games that season and adding three goals and four assists. He then spent 2014 to 2017 with MLS’s New England Revolution playing for Heaps and current Legion FC Head Coach Tommy Soehn while they were both manning the sideline in Boston.

Before coming to North America, Kobayashi had already built up an impressive resume, making more than 300 appearances for clubs across the world. He began his career in the J1 League in Japan for Tokyo Verdy and went on to play for Japanese sides Omiya Ardija and Shimizu S-Pulse, for Stabæk Fotball in Norway, and for Iraklis Thessaloniki in Greece. For an in-depth look at Kobayashi’s impressive career, check out last year’s interview with the man himself.