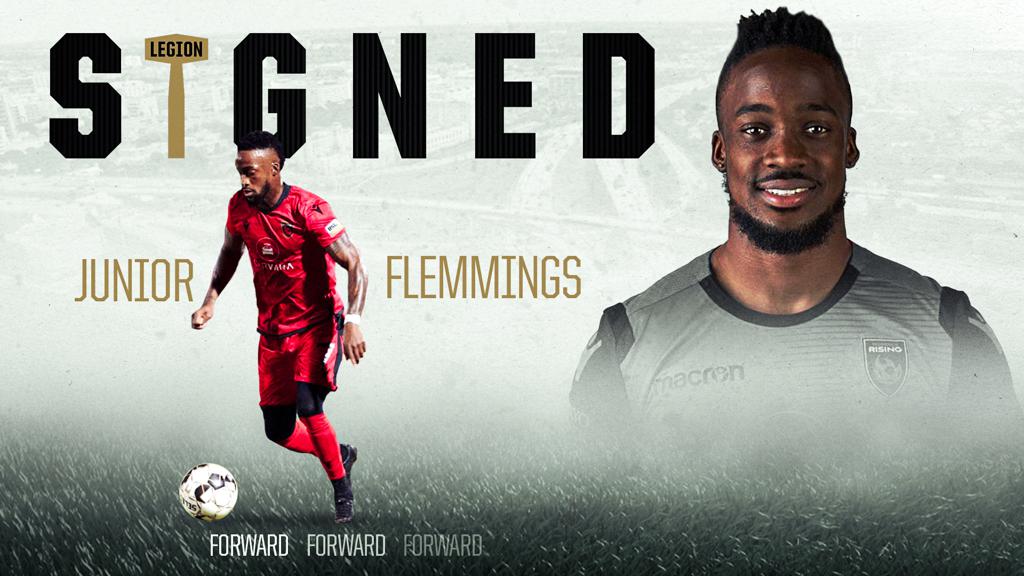 BIRMINGHAM, AL (Jan. 13, 2021) – Birmingham Legion FC announced today the signing of forward Junior Flemmings to a one-year deal – with a team option for a second season – pending league and federation approval and completion of a P1 visa. Flemmings joins Legion FC after two seasons in Phoenix where he scored 31 goals and added 12 assists in 45 appearances. His 29 regular season goals the last two years were the most in the league, and he helped Rising FC win the 2019 USL Championship Regular Season title.

Flemmings’ option was not exercised by Rising FC following the conclusion of the 2020 USL Championship season. He has two matches left to serve on a suspension for the use of foul and abusive language, specifically for the use of a homophobic slur during a match in October 2020 versus San Diego Loyal SC.

“Legion FC, and every individual associated with the club, strongly condemns all racial and homophobic comments and actions,” said Jay Heaps, Legion FC president and general manager. “We understand the importance of inclusion, respect and the impact our words have on those around us. We also believe that second chances provide opportunities for growth.

Heaps added, “Prior to moving forward, we had extensive conversations with Junior and his former coaches and teammates to better understand his character on and off the field. In addition, we spoke with [San Diego player] Collin Martin and [San Diego Head Coach] Landon Donovan to get their perspective on Legion FC giving Junior this opportunity. Lastly, we needed to look inward and make sure Legion FC has the appropriate structure in place to help our players as people, teammates, athletes, and accepting members of the community.”

“I am very sorry about the incident with Collin Martin,” said Flemmings. “I understand the impact words have, and I will work hard to improve my on-field demeanor even in the heat of battle. I am grateful for this opportunity as I believe Birmingham is a great place for me to grow both on and off the field. I am excited to play for Coach Soehn and be a part of Legion FC’s strong locker room culture.”

In addition to other team programs already in place, Legion FC has aligned with the Magic City Acceptance Center for sensitivity training seminars this season to help educate its athletes on inclusion and the overall LGBTQ+ community. As part of this alignment, Flemmings will participate in programming with the Center and will also join the club in undergoing league-mandated sensitivity training and education through the USL Championship’s partnership with the Institute for Sport and Social Justice.

"Coming off the ending of last season, I'm happy for Junior to continue his impressive career in the USL,” said Martin, the first openly gay player to play in the USL Championship. “Personally, I didn't want Junior's career to end, but more importantly that we learn as players and as a society to be respectful of our differences. I'm optimistic that we will be better because of this and that Junior will help advocate for respect within our game. I wish Junior continued success at Legion FC."

"After the events at the end of our season last year, we made it very clear that we were standing up for what was right and weren't looking to ruin anybody's career,” said Donovan. “I'm hopeful that Junior has learned from this experience and will use it to have a positive impact on people going forward.  We wish him the very best of luck in Birmingham."

Legion FC is committed to bringing ongoing attention to social issues and to supporting diversity and inclusion. Not only does the team celebrate Pride Night each season, but captain Mikey Lopez is an outspoken activist for the LGBTQ+ community.

“As a team, we believe in second chances and in opportunities for growth as people and as athletes,” said Lopez. “We have a tight locker room at Legion FC, so if Junior continues to learn from this and comes in ready to work hard on the field, our group will support him.”

Before joining Phoenix Rising FC, Flemmings spent a year with the Tampa Bay Rowdies, where he contributed six goals and six assists in 27 matches. He also played for New York Red Bulls II in 2016-17 and scored 17 goals to go along with six assists in 55 matches while helping his club win a USL Championship Regular Season Title and USL Cup.

Flemmings was born in Kingston, Jamaica, began his professional career with Tivoli Gardens FC in the Jamaican National Premier League, and led the team in goals in 2015-16 before coming to America. He made his debut for the Jamaican National Team when he was 21 and has since earned 10 appearances and scored one goal in a 2019 CONCACAF Nations League match versus Aruba.

About Birmingham Legion FC
Launched in 2018 as an expansion member of the USL Championship, Birmingham Legion FC is the Magic City’s first and only locally owned and operated professional soccer franchise. Legion FC qualified for the USLC Playoffs following each of the club’s first two seasons. The club plays home matches at BBVA Field, on the campus of the University of Alabama at Birmingham. For 2021 season ticket information and to purchase official Legion FC merchandise, please visit bhmlegion.com. Supporters are encouraged to download the Legion FC app and follow @bhmlegion on Facebook, Instagram, and Twitter for the latest club news.