BHM falls 3-1 in final match of the regular season, faces Tampa Bay next Saturday in Round One 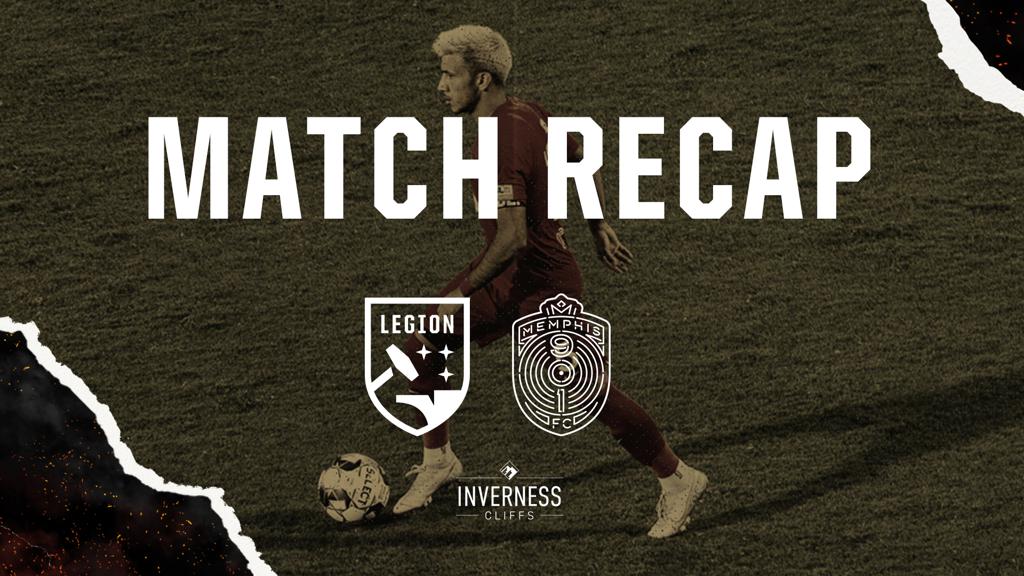 MEMPHIS, TN (Oct. 3, 2020) – Despite being eliminated from the postseason already, Memphis 901 FC knocked off Birmingham Legion FC for the first time in the two-season history of the two clubs’ on Saturday night, 3-1 at AutoZone Park.

A hattrick for 901 FC rookie forward Cal Jennings earned the visitors all three points on the evening and gives Jennings eight goals in his last four matches. The first goal came in the 36th minute as Jennings turned in a low, driven assist from defender Rece Buckmaster out on the right wing.

Legion FC evened the scoring just before halftime thanks to midfielder Bruno Lapa. Neco Brett fought to hold the ball up in the Memphis 18-yard box before laying it off to the onrushing Lapa. Lapa’s first attempt at goal hit the left post but ricocheted right back to him and he deposited a difficult, bouncing, first-time finish past 901 FC goalkeeper Jimmy Hague.

With the goal, Lapa has scored seven times in his rookie season for Legion FC, moving him up into a tie for 14th best in the league, and added five assists. He’s managed to score in all four matchups this year against the rivals from Memphis.

Memphis reclaimed the lead for the home side in the 54th minute after forward Keanu Marsh-Brown headed a misplaced Legion FC back pass into the path of the streaking Jennings who poked it past BHM goalkeeper Trevor Spangenberg. With the visitors stretching for an equalizer late, Jennings got through on a breakaway again in the 86th minute to seal it with his third goal of the game.

“It’s been a problem the last couple of games that I feel like we’re just not playing up to where we need to be as these games get playoff caliber performances,” said Legion FC Head Coach Tommy Soehn. “If you don’t come totally locked in and focused, you’re going to be on the short end of things.

“It’s disappointing because now we let something slip that was a goal of ours, a home playoff game, and now we’re on the road against Tampa [Bay Rowdies]. So, you know, unfortunately we have to deal with the cards we’re dealt and find a way to go to Tampa and get a result [next Saturday, October 10, at 6:30PM CT].”

"We really wanted to play at home first round, in front of all our fans in Birmingham, so we're disappointed, but we still feel confident we can get a result at Tampa Bay,” said defender Mikey Lopez. “We have to come out from kickoff ready to fight and ready to outwork them for the full 90 minutes. We'll be ready."

Legion FC came into the match knowing a win would guarantee itself a home game in the first round of the USL Championship playoffs next week, but due to a fast start to the 2020 season, and Charlotte’s last second victory over North Carolina earlier in the evening, BHM has clinched a spot in the playoffs for the second consecutive season.

The squad will head to Tampa Bay next weekend to take on the Rowdies at 6:30PM CT on Saturday, October 10. For live match updates, follow @bhmlegion on Twitter, and tune in to My68 or ESPN+ to watch the game and cheer on Legion FC!