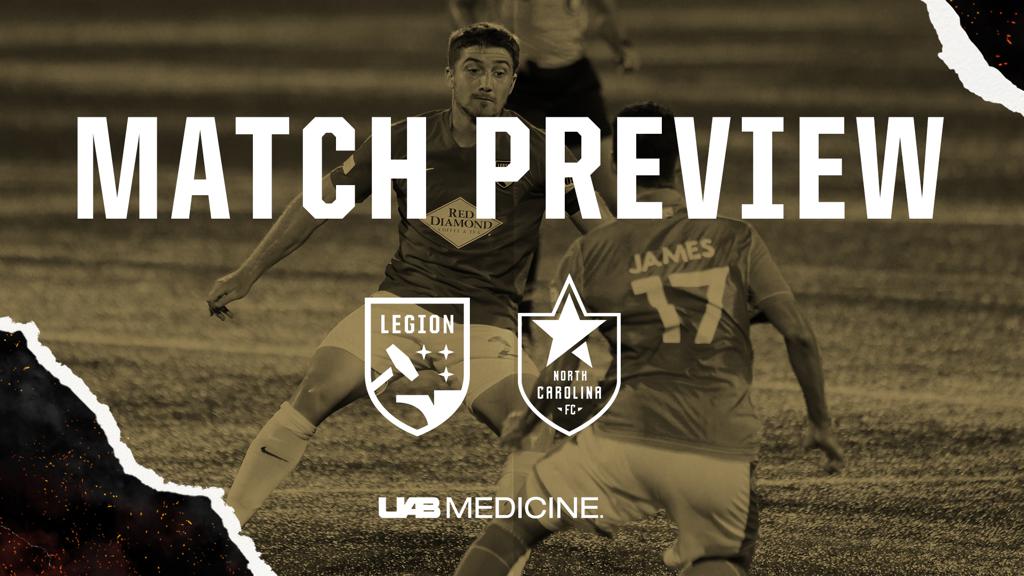 Legion FC returns to BBVA Field for what is both the final home match of the regular season and the final game against North Carolina FC. The contest is crucial for the Black and Gold, as all that is needed to secure a spot in the playoffs is a single point, and two wins in its final two matches will ensure the club finishes top of Group G and hosts a first round playoff contest.

North Carolina, on the other hand, cannot afford to come away from the match with anything less than all three points. NCFC were scheduled to face off against Memphis 901 FC this past Wednesday, but the match was postponed. Prior to the postponement, Dave Sarachan’s side came up short in a 1-0 result against the Charlotte Independence.

North Carolina FC currently holds a head-to-head advantage over Legion FC this season, with the former winning in two of the three meetings between the clubs. Since their last meeting, a 2-1 victory for NCFC, both sides have struggled for points. North Carolina has only earned three points out of a possible nine in its last three matches, while Birmingham has only earned four. However, Tom Soehn’s men are buzzing after a 4-0 victory away at Miami FC last Wednesday.

Despite having the likes of Robbie Kristo and Dre Fortune going forward, North Carolina FC has struggled on the goal scoring front. NCFC has only scored 12 times this season, a tally that is the fourth-worst in the USL Championship. Defensively, North Carolina has struggled a bit recently as well, as they have allowed six goals over the course of their last three matches. The club’s postponed meeting with Memphis 901 FC allowed for some additional time to prepare for Saturday’s meeting, time that will prove to be critical to the club’s hopes of a spot in the postseason.

Legion FC returned to winning ways in emphatic fashion with a 4-0 victory on the road against Miami FC last week, as Defender Alex Crognale and forward Neco Brett both bagged a brace and spots on the USL Championship Team of the Week. The win was much needed, as the Black and Gold were in the midst of a three-game winless streak.

Miami then did Birmingham a favor, as they drew 0-0 with Charlotte and put BHM’s destiny back into its own hands with regards to the playoffs. Legion FC and the Independence currently hold identical records (seven wins, three losses, and four ties), so even if both teams win out and finish even on points, it is Tom Soehn’s side that will head into the playoffs as Group G winners thanks to a substantially superior goal differential (+13 as opposed to Charlotte’s +3, as of today).

Legion Nation will be hoping for a big performance from the squad this Saturday, with the likes of Brett and midfielder Bruno Lapa shouldering the responsibility of creating chances going forward. Additionally, forwards JJ Williams and Brian Wright will be a further terror to a struggling North Carolina FC defense with their attacking play.

NCFC visits the Magic City motivated by its desire to keep its playoff hopes alive, but they will have to do it against an equally motivated BHM side looking to finish the regular season at the top of Group G.

Defender Mathieu Laurent (ACL) is the only Legion FC player unavailable for the match, per the VIVA Health Injury Report.

The squad is back on the road for the final match of the regular season against rival Memphis 901 FC on Saturday, October 3 at 7:00 PM CT, and the match will air live on My68 and ESPN+.

Fans are also encouraged to keep an eye on the Legion FC app, bhmlegion.com or @bhmlegion on social media for the most up-to-date info on the upcoming playoffs!