Checkin' In With Prosper Kasim

Legion FC's #10 looks back on the season, on offseason additions, on how its been having fellow Ghanaians in the squad, and shares his thoughts on the playoff race 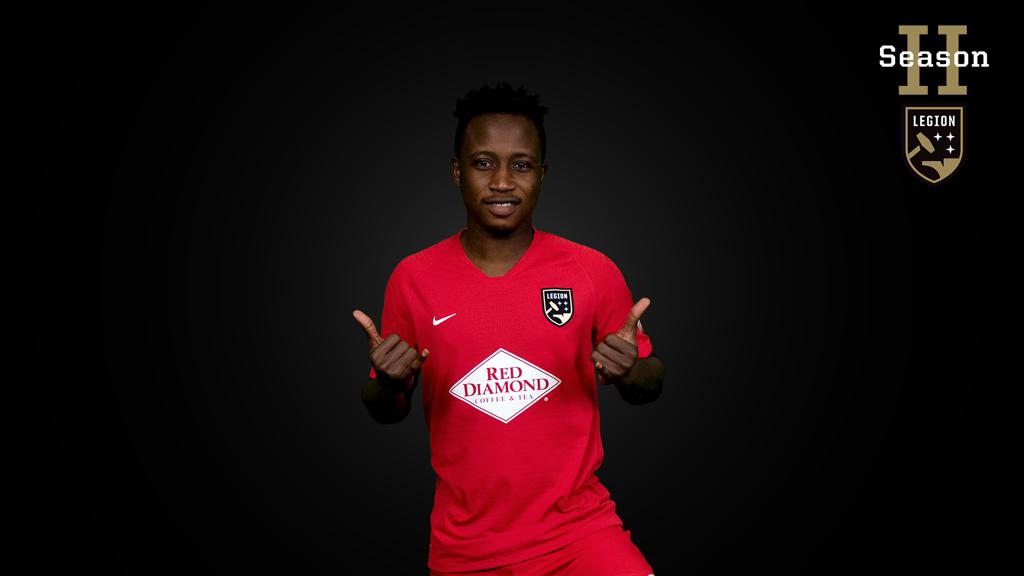 BIRMINGHAM, AL (Sept. 23, 2020) -- Legion FC forward Prosper Kasim sits down for an interview to discuss how the season is going thus far and how well he thinks his side can do in the 2020 USL Championship Playoffs.

Legion FC is currently in first place in Group G, with a 7-3-4 record heading into the final two home matches of the season. What do you think has propelled the team to have such a strong season?
“I think this year we have many good and quality players. Everyone can step in at any time and do the job. I think that’s what has been a big help. We have a lot of quality here this season, so I think that’s what has brought us this far.”

One quality player the club added in the offseason was Neco Brett. He’s fourth in the league now with nine goals this year. What has his addition meant to the team?
“We are all happy to get such a quality player. He’s like a goal machine. He always finds a way to score and he makes a lot of smart runs. There is no doubt why he scores so many goals – he’s such a good finisher. Even with a little chance he gets, he finishes it, so we’re very grateful to have him in the team.”

JJ Williams is also a player you played with a good bit last year, and this preseason, but now is back in the team on loan. He played well at Miami last week, but what’s he bring to the team as we prepare for the playoffs?
“He’s a really good addition. He’s a dynamic striker who can play from the wings, as you saw in the last game at Miami. He was playing from the right and still got two assists and almost even scored. So, I think we needed him because there will be a time when, if Neco is being marked, we’ll need JJ to attack too. It’s just good to have a lot of quality players up front where everyone can score.

That’s one thing we have in this team, all though Neco scores a ton of goals, you can see in games where Bruno [Lapa] scores, Brian [Wright] scores, even [Jonny] Dean scores, so JJ is a good piece to add to the team. He was here last year and made a very good impact, and I think his first game coming back he proved to us that he belongs here. He’s great for us to have back before the playoffs.”

You have two goals and three assists this season and have been playing in a slightly different role/position this year compared to last season. How has your role changed and your game improved in 2020?
“My role has changed a little bit from last year, but that’s football. One thing that I realized was we have a team where some players can play multiple positions well, and I think of myself as one of the dynamic players in the team. I can play four or five positions, so I just have to be ready to help the team. Where I am right now, wide left a lot, is good. We have Bruno who is also a number ten and he’s playing very well in the middle.

I think that’s a good decision from Tommy to put him there and me going wide, since I can play wide and have played wide so many times. So I think it’s just something tactical that can help the team grow and it’s working which is the most important thing, making sure that we’re setup and I’m playing in a way that can make the team better.”

Last year you joined the team first, then Razak Cromwell and Anderson Asiedu, and then this year the club added another Ghanaian in Rudolf Mensah and a Nigerian in Bolu Akinyode. Has having those guys on the team made coming from Sweden to Birmingham, Alabama, and dealing with the suspension of the season, easier for you, and are you guys all close and supportive of each other?
“It’s good to have guys from your continent or from your country in the same team. It’s good because we all talk and make jokes together. Rudy, Anderson, we all have that connection, with Razak we’re all from Ghana so we all stick together. Anderson is always cracking up, man. He’s funny.

Well we’ve got two games left in the regular season, and it looks like we’ll make it to the postseason. How well do you think the team can do, and what do you think we need to do to compete in the playoffs?
“I think we have a good chance to get into the playoffs and that we have a good team. We just have to be focused and put everything behind us, and make sure we work very hard. With hard work we can go very far in the playoffs and can do much better than last year."

Legion FC returns home to BBVA Field to face North Carolina FC on Saturday, September 26, at 6:30PM for the final home match of the regular season. Get your tickets at bhmlegion.com/tickets, by emailing tickets@bhmlegion.com, or by calling the Legion FC Ticket Office at 205-791-7145.

Keep an eye on Legion FC's website and social media channels in the coming days and weeks for updates on Birmingham's race to the postseason, as well as match dates and opponents for the USL Championship playoffs.