BHM extends its lead atop Group G to 5 points 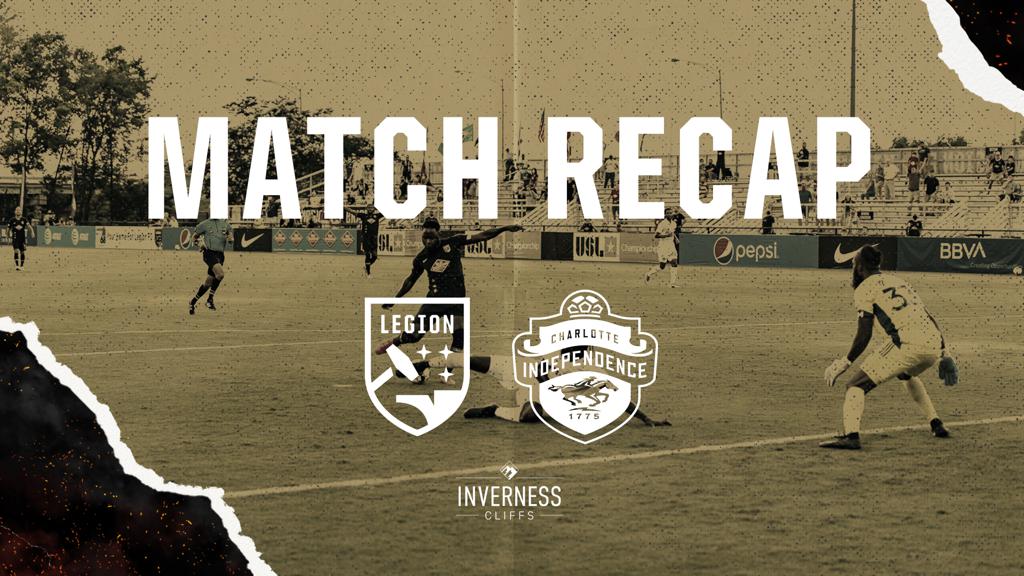 BIRMINGHAM, AL (Aug. 5, 2020) – After a disappointing, goalless result in the last match, Birmingham Legion FC came out amped up and ready to prove the goal flurry to start the season was the rule so far in 2020, not the exception, on the way to a 4-1 victory against the Charlotte Independence on Wednesday night.

The first of four, pivotal clashes with the Group G rival was all Legion FC from the start, as forward Brian Wright found midfielder Bruno Lapa open in the box in the 5th minute for an early shot. The Charlotte ‘keeper made the save but could not clear the ball, and defender Jonny Dean pounced, putting the rebound in the back of the net. The early goal marks the fourth game out of five this season in which Legion FC scored before the half hour mark.

The early onslaught continued in the 11th minute, this time starting all the way back with goalkeeper Matt VanOekel. His long goal kick was awkwardly headed backwards by a Charlotte midfielder and into the path of onrushing forward Neco Brett, who deftly brought the ball down between two Independence defenders, faked out another, and coolly slotted the ball into the left corner to open his Legion FC account.

In the middle of grueling stretch with five games in 15 days, Head Coach Tommy Soehn utilized all five of his subs, trying to keep his guys fresh, but the gas pedal stayed firmly planted into the floorboard for the guys in Black and Gold. Dean flew down the right touchline in the 52nd minute, running on to the through ball from midfielder Eli Crognale, who was making his first professional start, and then Dean cutback and found Lapa at the top of the box for a tidy one-time finish.

BHM kept pressing, and Brett wanted another one in his fifth match for Legion FC. Last season’s USL Championship All-League Second Team forward buried a rocket of a shot from the top of the box in the 66th minute after forward Brian Wright danced past a couple defenders and expertly laid the ball off. The four goals give Legion FC 10 in five matches, for a +6 goal differential.

The only thing missing on the evening was a donut, but that treat was spoiled in the 76th minute courtesy of an Enzo Martinez penalty for Charlotte. The Independence got into the box, a shot bounced off the crossbar, and in the chaos that ensued the referee chose to call a foul for an apparent high kick in the box.

“It feels pretty good,” said Brett when asked about the attack and bagging his first two goals for Legion FC. “As a forward you always want to be scoring goals. What was most important was getting three points, especially at home. I think me, Brian, Bruno and the guys, we understand each other, we know what it takes to be dangerous going forward. We’re just following the coaches’ instructions.

"The coaches and the players have welcomed me with open arms, so it feels good to be here. I feel at home right now. I just need to continue to put in the work and help the team get results.”

“I honestly think the guys played well down a man last week,” said Assistant Coach Khano Smith when asked about the quick turnaround and good result. “Carolina is a good team and so is Charlotte. You know we were able to study some more video and we did a couple of things different today than we did against Carolina on Saturday and just try to improve game by game. Credit to the guys, they work hard. I think we have a really good group and a really good team.

“We tried today to utilize all five subs and get as many guys rest as possible, but listen, everybody is in the same boat. We’re just happy to be out here playing again, it’s going to be difficult. There’s not much you can do in training now; it’s like you’re in a classroom setting - you’ve got to learn to save the legs. We’ve been in worse situations, so I think we’ll figure it out.”

Legion FC returns to BBVA Field on Saturday, August 8, at 6:30PM to take on Atlanta United 2. Get tickets at bhmlegion.com/tickets, by emailing tickets@bhmlegion.com, or by calling the Legion FC Ticket Office at 205-791-7145.