Legion FC hits the road for a playoff rematch on Saturday at 6:00PM CT - Watch on My68 or ESPN+ 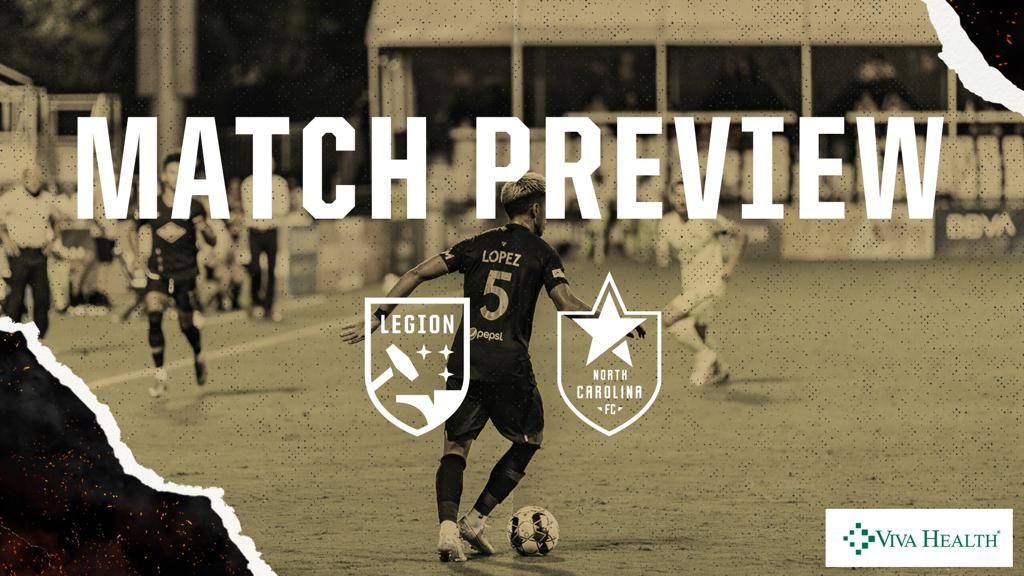 Legion FC is off to a hot start in 2020 and on a three game unbeaten run heading into a clash with Group G foe, North Carolina FC.

Unlike Legion FC, North Carolina FC came into this USL Championship season with little turnover aside from the departures of midfielder Ulrich Ewolo, to Czech club MFK Vyškov, and defender Aaron Guillen, who now plays for the Tampa Bay Rowdies. Despite that, NCFC has struggled to find the form that saw it finish seventh in the Eastern Conference last year. North Carolina currently sits at the bottom of Group G, having earned only one point from its first two fixtures. The club opened its season with a 1-0 loss to Louisville on March 7, prior to the season suspension, and returned to play, following the restart, with a 2-2 draw at Tampa Bay on July 17.

North Carolina’s draw against the Rowdies was a come-from-behind effort completed by goals from midfielder Dre Fortune and forward Robbie Kristo. Fortune and Kristo were leading scorers for NCFC last season, with the duo scoring eight and nine goals, respectively. The club also brought back its top three in assists and chances created in 2019, including Ben Speas, Steven Miller, and Nazmi Albadawi. With the additions of forward Hadji Berry and midfielders Daniele Proch, Pecka, and Manny Perez (on an extended loan), Head Coach Dave Sarachan has options in the attack.

For BHM, the good form of forward Brian Wright (two goals), defender Jonny Dean (three assists) and midfielder Bruno Lapa (three goals, two assists) has spurred the club on to an unbeaten start and a spot at the top of Group G. Credit goes to the Legion FC backline as well, with the Black and Gold touting a +4 goal differential thanks to the efforts of goalkeeper Matt VanOekel, and centerback Alex Crognale. Crognale was named to the USL Championship Team of the Week for Week 5 thanks to his defensive showings and a goal in Birmingham’s 1-1 draw with Tampa Bay.

Saturday’s fixture is also one marked by familiarity, with the two clubs sharing history not only on the pitch, from last season’s playoff battle Legion FC won 3-2, and defender Akeem Ward going from Birmingham to NC in the offseason, but also between the two men in charge.

Legion FC Head Coach Tom Soehn and North Carolina FC Head Coach Dave Sarachan coached alongside one another as the assistant coach and head coach, respectively, for Major League Soccer side Chicago Fire FC from 2002-2003. Coach Soehn has respect for the way in which Sarachan runs his side, noting NC's style as a tough matchup.

“Obviously I’ve coached with Dave [Sarachan] and know his ideas of how he wants to play,” said Soehn. “It’s very similar to ours. He’s going to be organized, he’s going to get his fullbacks forward, and we’re going to have to be able to take times of their possession, because they’re quite good at it, and make sure that we don’t panic and we just hold our ground, and make sure we can capitalize when they turn it over. It’s very similar to what his teams have been in the past, and it’ll be a tight ballgame, a bit of a chess match. Hopefully the Tampa game will give us one step up as far as what those games are like, because we just went through one."

Midfielder Prosper Kasim (hamstring) and defender Razak Cromwell (ankle) will both be unavailable for the match, per the VIVA Health injury report.

For live match updates, follow @bhmlegion on Twitter, or tune in as the match will air live on My68 and ESPN+.

Legion FC returns home to BBVA Field for a two-match homestand next week and will face the Charlotte Independence on Wednesday, August 5, at 7:00PM and Atlanta United 2 on Saturday, August 8, at 6:30PM. Get tickets at bhmlegion.com/tickets or by emailing tickets@bhmlegion.com or calling the Legion FC Ticket Office at 205-791-7145.