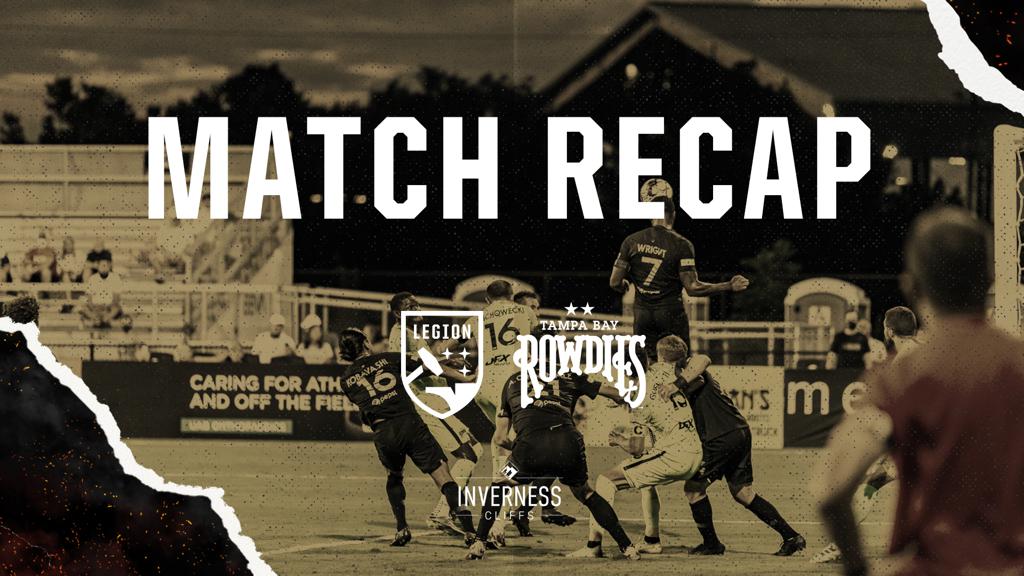 BIRMINGHAM, AL (July 25, 2020) – Birmingham Legion FC hosted the Tampa Bay Rowdies in its third match of the 2020 USL Championship season at BBVA Field on Saturday night, and the rain held off just long enough for the Black and Gold to ride an early goal and some strong defending to a point in a tough match.

Legion FC again started hot, scoring a goal inside the first half hour for the third match in a row. Midfielder Bruno Lapa got fouled just outside of Tampa Bay’s box, and then swung in a pinpoint freekick to the front post that defender Alex Crognale steered in past the frozen ‘keeper. The goal marks Crognale’s first since coming to the Magic City, and the assist gives Lapa two assists and three goals in three matches to kick off his professional career.

Key offseason signing Neco Brett made his first start for Legion FC, and his shot on a breakaway in the 19th minute was BHM’s best chance of the match to grab a second goal. Tampa Bay then equalized early in the second half after forward Juan Tejada found forward Sebastian Guenzatti in the box, and Guenzatti nodded into the back of the net.

The draw gives Legion FC seven points on the season and the club currently occupies the top spot in Group G, three points clear of the Charlotte Independence. A quick start to the season was vital, as the club gets ready for a stretch of five matches in 15 days.

“August is going to be a tough month for us, and we’re going to have to deal with it one match at a time,” said Legion FC Assistant Coach Khano Smith. “Obviously, you’re going to have to plan ahead, but our mentality is always focused on whatever the next game is and trying to figure out the best way to win that game and plan for it. I think our roster is much deeper than it was last year, and there’s a lot more guys this year that will get more playing time this year than guys did last year. We’re confident with the guys we have now. You look down the bench and there’s a lot more choices this year than there was last year in terms of guys coming off the bench, and I’m sure they’re all going to play their part.”

When asked about Crognale’s goal and start to the season, Smith said, “Alex is definitely one of our leaders on and off the field. We were lucky enough to get him to come from Columbus once we knew he wasn’t going to be retained by them. He’s come in and done everything we’ve asked of him. You know, we’ve actually challenged him to score more goals because we do think he’s more of a threat, and he accomplished that tonight and I’m happy for him. I think he’s played really well so far this year and he’s going to be key for us going forward because he helps us all over the field.”

Crognale’s goal earned his side a point, but he felt like they could have come away with more. He said, “The result is a little disappointing. I thought we deserved more, and we had a few more chances that I think we could’ve taken, but at the end of the day a draw against a gritty team like Tampa Bay is a good result. I’m happy and delighted to have scored; Bruno has been on a tear, so to benefit on a great ball from him was perfect.

“We’ve gotten off to a good start. I think the work that the guys put in during the quarantine/Covid break is showing. Grabbing two wins and a draw is a great start to get things rolling, and it’s a short season so we didn’t have any time to waste. We’re excited and looking forward to keeping it moving.”

Legion FC hits the road for match number four to take on North Carolina FC on Saturday, August 1 in a rematch of last season’s first round playoff victory. The match will air live on My68 and ESPN+. The club returns to BBVA Field for a two-match homestand, Wednesday August 5 vs. the Charlotte Independence at 7:00PM and Saturday, August 8 vs. Atlanta United 2 at 6:30PM. Tickets are available at bhmlegion.com/tickets or by calling the Legion FC Ticket Office at 205-600-4635, and both matches will air live on My68 and ESPN+.