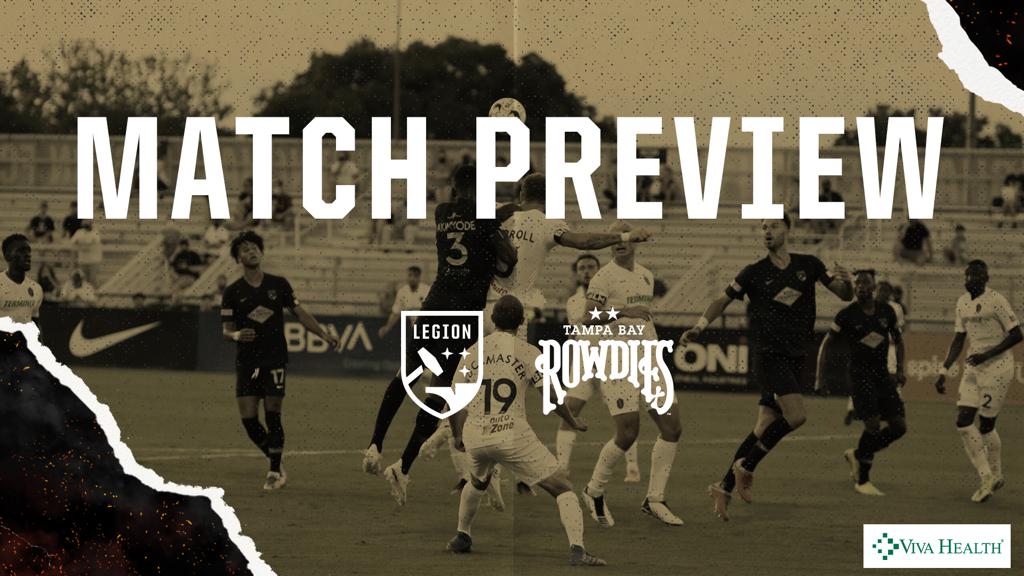 Legion FC returns to BBVA Field this Saturday, July 25, looking to earn its third win in as many matches. The Black and Gold face off against the Tampa Bay Rowdies at 6:30PM CT in what will be the third ever meeting between the two sides, with both teams holding a win over the other.

The last time Birmingham and Tampa Bay met, BHM earned three points on the road with a 1-0 win at Al Lang Stadium. The result was one in which Legion FC utilized its wingers to get in behind the Rowdies defense on either flank, then play into the middle and cause havoc in front of goal. Seeing as the Black and Gold has a similar combination of pace, vision, and technical ability out on the flanks this year with the likes of Jonathan Dean and Jaden Servania, it is possible that Head Coach Tom Soehn will look to attack Tampa Bay’s wingbacks once again.

One of the four sides Legion FC will face this season that is not in Group G, the Rowdies pose the biggest challenge to date for Birmingham this season. Tampa Bay finished fifth in the USL Championship Eastern Conference last season and were the second highest scoring team in the conference behind New York Red Bulls II with 61 goals scored.

Familiar faces in Sebastian Guenzatti and Juan Tejada will look to make things difficult for Matt VanOekel and the Legion FC backline. Guenzatti finished third in the league last season with 19 goals, a Rowdies record, and Tejada was second on the team with 10. Additionally, new signing Kyle Murphy is focused on opening his account with his new club after leading Loudoun United FC in scoring last season with 13 goals, while wingback Leo Fernandes hopes to continue to his goal scoring form after finding the back of the net in all three of the Tampa Bay Rowdies matches so far.

Equally as impressive, Tampa Bay was the fifth best defensive side in the entire USL Championship in 2019, but they did not retain last season’s starter in goal or any along the backline. They have revamped the group, with acquisitions of defenders Aaron Guillen, Jordan Scarlett, and Forrest Lasso. Guillen and Scarlett spent the 2019 season with North Carolina FC and NY, respectively, while Lasso split time with Major League Soccer side FC Cincinnati and Nashville SC before its move to MLS. Additionally, Evan Louro joined from NY to add his shot stopping capabilities between the sticks.

Guillen and Scarlett totaled 183 clearances, 103 interceptions, and 112 tackles between the two of them in the 2019 season. Additionally, Lasso’s time in Nashville earned him his third consecutive spot on the USL Best XI, an honor he adds to a list that also includes 2018 USL Championship Defender of the Year.

To say that Tampa Bay has talent at the back would be an understatement. Despite that, their backline is not impenetrable. The Rowdies gave up a 2-0 lead against North Carolina in their most recent match, and they were first to concede in their 2-1 win over Atlanta United 2 on July 11. It seems that Tampa Bay’s new look defense is taking time to gel, and catching them relatively early following the season restart could very well play into Legion FC’s favor.

Birmingham head into the match following a 2-1 win on the road against the Charleston Battery. The match saw forward Brian Wright and midfielder Bruno Lapa find the back of the net once again, as well as another firm defensive performance from the squad despite conceding in the first half. Wright and Lapa have combined for five goals in Legion FC’s first two matches, and their performances have earned Lapa USL Championship Player of the Week nod and Wright a spot on the Team of the Week for Week 4. Equally as impressive has been defender Jonathan Dean, who is tied for second in assists in the USL Championship with three and will look to play his attacking teammates in behind the defense yet again this weekend.

Saturday’s contest will be either side’s toughest test, as both clubs field players that have started the 2020 USL Championship season strong. It is the hope of those in attendance at BBVA Field, though, that it is the players wearing Black and Gold that continue their impressive run of form.

Midfielder Prosper Kasim will be unavailable for the match after sustaining a hamstring injury in last Sunday’s win over the Charleston Battery, per the VIVA Health injury report.

Legion FC returns home for match number three on Saturday, July 25 vs. the Tampa Bay Rowdies at 6:30PM. Tickets are available at bhmlegion.com/tickets or by calling the Legion FC Ticket Office at 205-600-4635, and the match will air live on My68 and ESPN+.