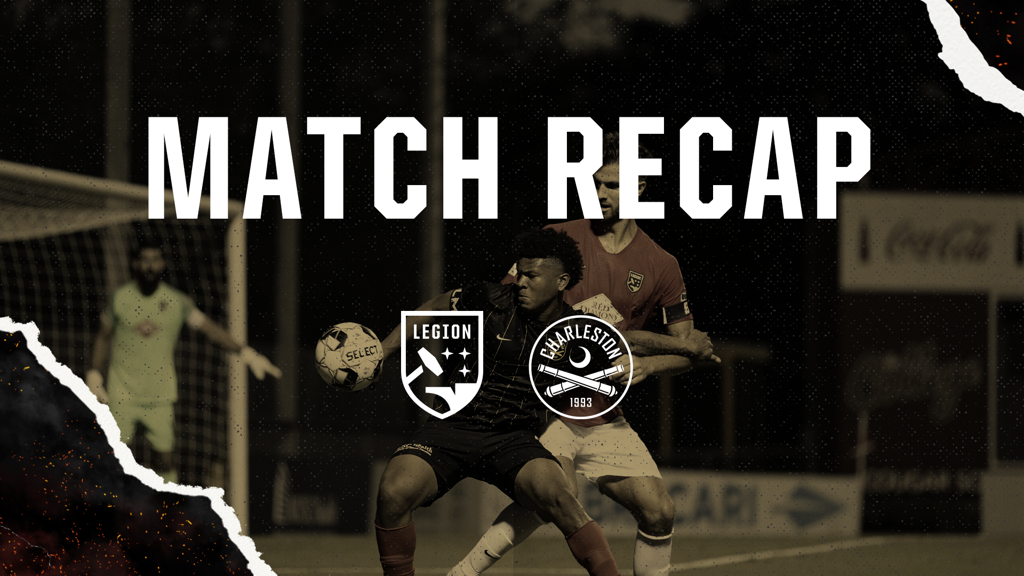 CHARLESTON, SC (July 19, 2020) – Birmingham Legion FC has played two matches in the revamped 2020 USL Championship season and has come through victorious both times, after a 2-1 win at the Charleston Battery on Sunday night.

While this first road tilt of the season may have been quite a bit tougher of a challenge than last Wednesday’s win at home, the three points count just the same, as do the goals from a familiar pairing, forward Brian Wright and midfielder Bruno Lapa. Both found the back of the net for the second Legion FC match in a row, and both assists came courtesy of midfielder Jonny Dean. The two assists give Dean three on the season, putting him tied for second in the USL Championship, and Lapa’s third goal of the season moves him into a tie for second in the league, as well.

Wright opened the scoring in the 12th minute after running on to a through ball from Dean into the right side of the box. The angle was a tight one, but the ‘keeper stood no chance as Wright coolly smashed the ball into the far side netting. After Charleston’s Zeiko Lewis levelled things in the 29th minute with a nice volley from the top of the box, Bruno Lapa scored from virtually the same spot on the field in the 54th to provide the final margin. Dean again found himself on the ball in the attacking third, and found the onrushing Lapa, whose shot took a slight deflection before finding the back of the net.

“I think they’re [Charleston] always organized, and pretty disciplined,” said Legion FC Head Coach Tommy Soehn when asked about how his team responded in a physical match. “We came out of the blocks really well, and I actually felt like we could’ve gone up by more than we were, and then whether it was our legs got tired or what, we got away from playing a little bit, they caught some life, and all of a sudden we were under the gun. Yeah, it was a physical match, but on both ends I felt like a couple of our yellows were soft, were good tackles, but that’s what he was calling, so nothing you can do. But in the end, I was pleased, you know, sometimes grinding some out when you’re travelling seven hours on a bus and playing two games in a week, that’s what it takes. I thought our guys did a good job grinding it out today.”

Midfielder Anderson Asiedu missed the first match of the 2020 season while serving a one-game suspension for a red card in last year’s playoffs but made his presence felt in the middle of the park tonight.

“The biggest thing, this whole year, is the mentality of this team has been to be great, as a team and as individuals as well,” said Asiedu. “But, it’s all come down from the guys pushing each other every day. That helps me a lot, because we go to training and push each other, and [Director of Sports Science and Performance] Dan [Barlow] is pushing us all year long, in quarantine, working on fitness and running every day trying to stay in shape. The whole quarantine we were working. So that helps me to be ready and be great. No doubt, the guys do our running off the pitch, so you want to look at what somebody is doing and that motivates you. Like, a teammate is out there doing it, so why not? You want to too. That was the biggest thing.

“It’s a team effort, man. Every day we go out there and fight. We compete in training and work hard, because we want to be the best we can be, individually, and as a team. So that helps us, you know. Everybody brings the fight in training, everybody is ready. Tommy helps us to, he preaches about working hard, so that’s become part of our thing. Everybody wants to work hard; everybody wants to compete and that helps us a lot.”

Legion FC returns home for match number three on Saturday, July 25 vs. the Tampa Bay Rowdies at 6:30PM. Tickets are available at bhmlegion.com/tickets or by calling the Legion FC Ticket Office at 205-600-4635, and the match will air live on My68 and EPSN+.

The commemorative jerseys Legion FC is auctioning off to support the Birmingham Civil Rights Institute are also still available for bidding by going to 32auctions.com/bhmlegion. All proceeds go directly to the Institute, and the bidding ends on Saturday. Thank you for your support of Legion FC, the Civil Rights Institute, and the greater Birmingham community.