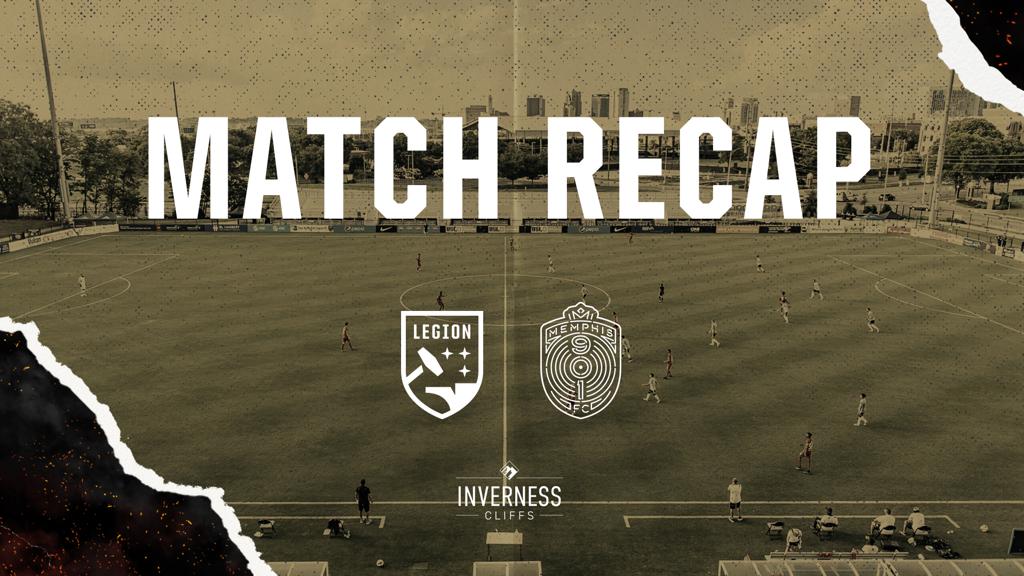 BIRMINGHAM, AL (July 15, 2020) – Birmingham Legion FC had to wait nearly nine months, 262 days to be exact, between competitive matches in the USL Championship, and if early results are any indication, that was time well spent, as BHM jumped on rival Memphis 901 FC from the opening whistle and cruised to a 3-0 victory in the first match of the 2020 season.

There was palpable excitement in the community leading up to the match between the Deep South rivals, a match that aired nationally on ESPN2, and that energy could be felt in the limited capacity stadium, from the socially distant fans, down on to the pitch. Those loyal fans at BBVA Field had a lot to cheer about in a jam-packed first half, starting with the first Legion FC goal, a chipped ball on the 22nd minute from midfielder Bruno Lapa that popped right over the outstretched arms of Memphis’s goalkeeper, USMNT-legend Tim Howard, and into the back of the net.

Lapa, 23, had a professional debut to remember, as he also bagged his first professional assist in the 31st minute, after getting the ball on the wing and sliding a ball in to forward Brian Wright in the box that was smartly tucked away. The Legion FC lead grew to three, again courtesy of the Brazilian playmaker, just ten minutes later after midfielder Prosper Kasim played in Lapa, who then cutback and buried the ball into the far corner.

“I’m very happy to be able to help my team secure the win tonight,” said Lapa when asked how he felt about his debut. “We’ve been working very hard during this time to try and improve and make sure that we were sharp tonight. I’m very happy that we got the win, and this is just the start. We’re looking forward to Sunday [at Charleston] already.”

Defensively, the whole group picked up right where they left off in 2019. Led by captain MattVanOekel, BHM allowed just one shot on target en route to a shutout. Newcomer Bolu Akinyode controlled the game from hid holding midfield spot, leading the team in passing at a 93% completion rate, the centerback duo of Alex Crognale and Razak Cromwell were hardly tested, and, per usual, Mikey Lopez was a riot from his leftback spot, finishing with the most touches, most duels and most tackles on the team.

When asked about his role on this team, Lapa said, “I think for me, and Tommy gave me enough confidence by telling me this, it’s being able to find the ball in front of the striker, playing both sides of the field, connecting passes, and being dangerous by getting some shots off. I think just being able to be that guy underneath the striker that can help the team in pressing and whatever situation it is important, that’s what I want to do; just help the team in being dangerous when going forward.”

“For me it was just about getting out there and getting my first start as a professional soccer player under my belt,” said Servania. “As a young guy you have got to work hard. That’s what my coaches were telling me to do, so I got out there and worked hard. On offense they told me to have fun, so I tried my best and went out there and did my thing. I enjoyed it.”

The club also unveiled new, commemorative kits to honor a partnership with the Birmingham Civil Rights Institute. The jerseys will now all be auctioned off, and all proceeds will go to support the Institute. Get in on the bidding HERE.

Legion FC hits the road now for their second match of the young season, at the Charleston Battery on Sunday, July 19 at 7:00PM CT. The match will air live locally on My68 and nationally on ESPN+. The club returns home for a match next Saturday, July 25 vs. the Tampa Bay Rowdies at 6:30PM. A limited number of tickets are available at bhmlegion.com/tickets or by calling the Legion FC Ticket Office at 205-600-4635.