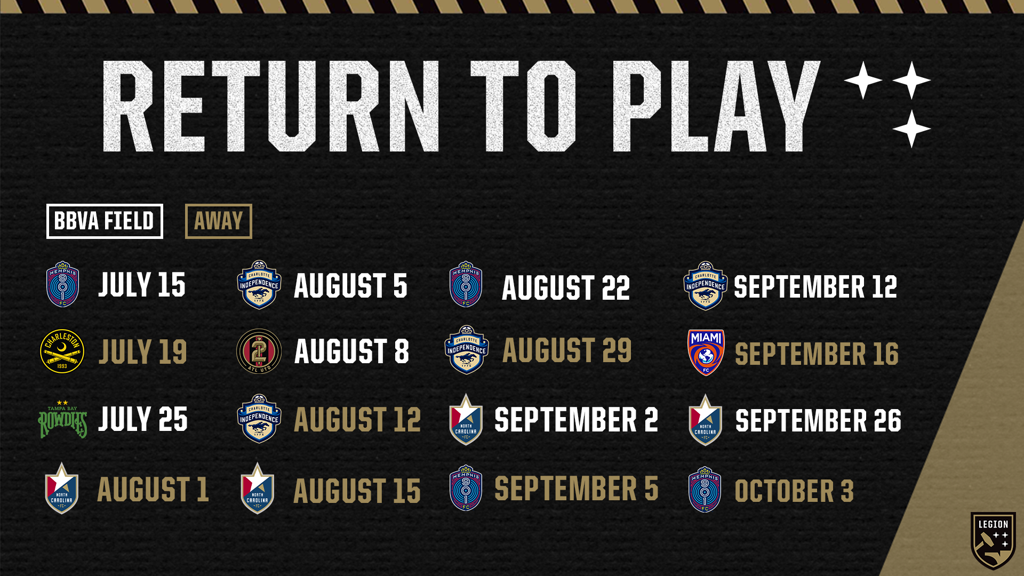 Eight contests will take place in downtown Birmingham at BBVA Field, with the first coming in just eight days against rival club Memphis 901 FC on Wednesday, July 15 at 7PM. Single game tickets are available now, and the match will also air live on ESPN2.

Legion FC was placed in Group G for the remainder of the season and will compete with the Charlotte Independence, Memphis, and North Carolina FC for two available playoff spots. Birmingham will play each team in its group four times, twice each at home and on the road.

Outside of the group, the club will play each team in Group H once to round out the full schedule. Group H includes Atlanta United 2, the Charleston Battery, USL Championship newcomers Miami FC, and the Tampa Bay Rowdies. Every match will count towards the 2020 points total and determine the standings in Group G.

“The group we’ve drawn will be difficult,” said Legion FC Head Coach and Technical Director Tommy Soehn. “We’ll have to maintain our focus throughout, but the guys are really excited to get back to playing and to be back in front of our fans.”

As announced last week, BBVA Field will be open to fans, at limited capacity. Check out all Health and Safety Protocols in place at the stadium here.