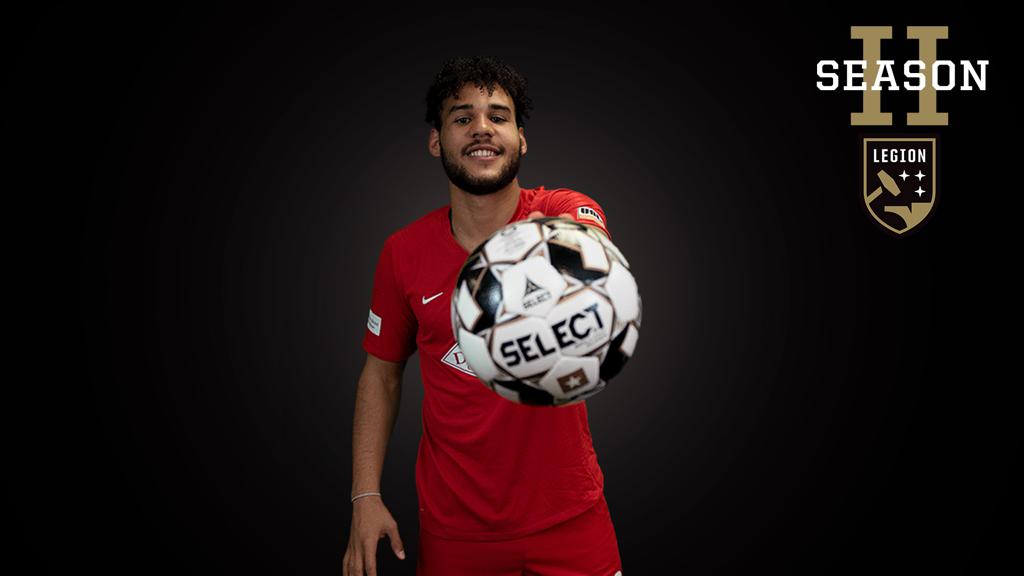 BIRMINGHAM, AL (Mar. 4, 2020) -- Legion FC begins its second USL Championship season at home next Sunday, March 15, at 4:00 PM against the visiting Charleston Battery. There will be plenty of new players representing the Black and Gold in year two, but there will also be some familiar faces for the Legion faithful to cheer on.

Among those familiar faces is Alabama native JJ Williams. Williams split time last season between Legion FC and Columbus Crew SC of MLS, and this season, he returns to the Magic City for the 2020 league campaign.

“I’m very excited to be back here,” Williams said. “I felt like last year I was here and did my thing a little bit, but at the same time, I played at a lot lower standard than what I hold myself to. For me last year, going back and forth, I didn’t know where my head was at. I was always worried about where I was going to be at, what I was going to do… With me coming back this year, my head’s in a clear spot.”

Williams rejoins a stable returning core looking to build off a successful inaugural season in 2019. The combination of returners and new talent is a strong building block, and the forward hopes to provide fans of the club with a fun year.

“When you bring in new players chemistry is always hard to get going, but it’s something that will come,” said Williams. “The talent level and the skill we have on this team is something very special this year. The number of quality players we have on this team right now is fantastic. I think we’ll be very good, and I don’t think chemistry will be an issue at all, even though we have a bunch of new guys playing together. Just from what I’ve seen within the first two weeks compared to last year, we have potential to bring back a USL Championship title and that’s not something I say very lightly.”

With lofty goals in place, it is hard not to get excited about the Black and Gold heading into the new season. However, with high goals comes a necessary level of focus and determination.

“There’s going to be no different expectations week-by-week,” said Williams. “No matter who it is we’re going to try and go in and focus on us. We’re just trying to go in and give our best performance every week, that’s the main thing. With us having a lot of good players and a lot of young players, it’s about consistency and getting our best performance. It always starts with the first match, and there’s no other focus on our mind right now than preparing and getting ready for the Charleston game [Sunday, March 15].”

Equally as exciting is the growing chemistry between Williams and forward partner Brian Wright.

“Brian’s my boy,” said Williams. “I talked to him when I first got here and it was like ‘Hey, we did our thing last year, everything was good, and we dealt with what we were given. We made lemonade with lemons, but we have to really do our thing this year; you’re here, I’m here for the whole year, plus we got Neco [Brett], so we have to really show out. Last year it wasn’t what either of us could do in terms of the chances we had, we really have to put away games and show everybody what they missed out on.”

The love and support shown by Legion Nation is something Williams has become grateful for, and he credits it for his transition into becoming a professional.

“It was great being here in Birmingham because I didn’t really have a home,” said Williams. “It wasn’t Columbus and it wasn’t really here but no matter what, every time I came back here - no matter how much I did or how little I did, despite my season performance not being where I wanted it to be - everybody here just showed me love; it was constant love. Everybody wanted me to be here and come back here, it was something that was really great because that means a lot to me.”

Additionally, the opportunity to represent his home state of Alabama is one the forward does not take for granted.

“Montgomery will always be home,” said Williams. “Being able to play close to my home is something I consider an extra motivation. It’s a very big thing because playing for this team and having this team here is something that I never thought would’ve been possible. Ten years ago, I never would’ve thought something like this was close, so being able to actually be a part of the team and the vision that so many people saw means a lot. We as a team try to make sure that it doesn’t fail, and I want to make sure I don’t let those people down that worked so hard to make this possible for us.”

The next opportunity to catch Williams and the club in action is now less than two weeks away! Legion FC’s season opener kicks off at BBVA Field at 4:00 PM on Sunday, March 15, with gates opening an hour before kickoff for a St. Patrick’s Day celebration. Single game tickets are available now, and the full season schedule can be found HERE.