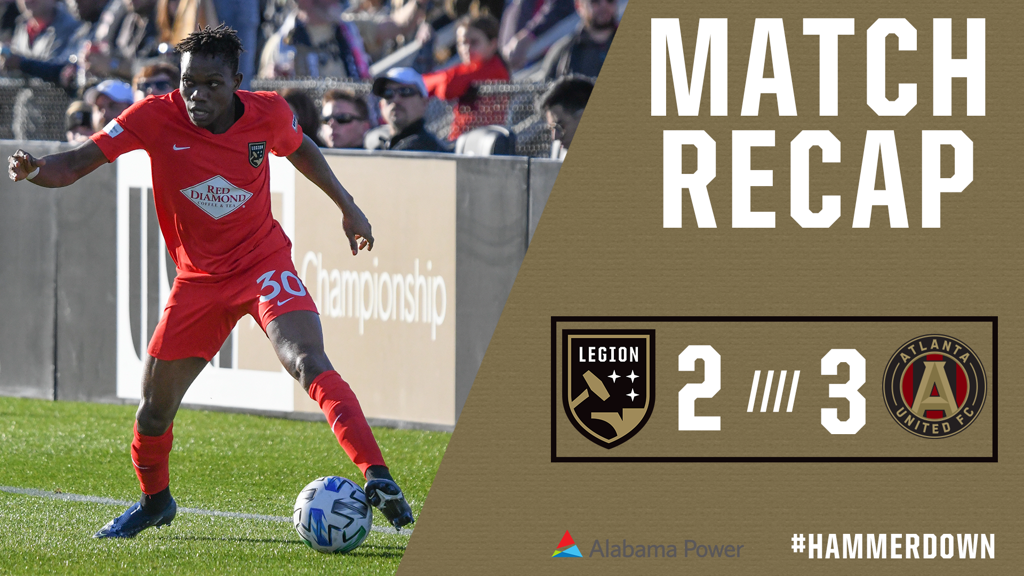 Despite just opening preseason camp just two weeks ago, the hometown squad came out and went blow to blow with a lineup full of bonafide MLS stars from Atlanta and went into the half down just 1-0. After a couple great saves by Legion FC’s Matt VanOekel, United’s Ezequiel Barco opened the scoring just before the break.

Legion fans got to see all the new signings take the field for the first time and they did it looking good in the new ‘Sweet Home’ third kit, as well. Forward Neco Brett bagged Legion FC’s first goal of the 2020 season right after halftime from the penalty spot. Midfielder Bolu Akinyode started alongside Anderson Asiedu and broke up attack after attack, and anything that slipped past the midfield was dealt with by centerback Alex Crognale.

Head Coach Tommy Soehn was happy with what he saw from his squad so early in preseason, and he said, “Overall, like I said, I’m pleased with the whole group. Obviously, I would’ve liked to come out with the result, but this isn’t result time. This is more about getting the experience, getting preseason under your belt, and sticking to the process over the results. I’m happy with everything that happened, and our fans came away with a pretty good show today, so I’m pleased with that.”

Both sides made full lineup changes in the second half, and other newcomers like Jaden Servania got some time, along with all the preseason trialists. After landing in the States from Ghana just this week, forward Rudolf Mensah showed off the wheels and slotted home Birmingham’s second goal in the 80th minute after latching onto a through ball from Daigo Kobayashi.

When asked about the kids, Mensah and Servania, Soehn said, “They’re young guys, you know. They’re 18-year-olds who get to come in and play like that and show their quality. I’m really happy for [Rudolf] Mensah; he just traveled in from Ghana and overnight his world changed, and he scored a great goal.”

Atlanta United also put away a penalty in the 67th minute, and then snuck out of town with the game winner in stoppage time.

Results aside, the match was a fun one for all supporters packed tight into BBVA Field, and Soehn and his group worked hard to represent Birmingham the right way. He said, “Having Atlanta come, it’s an honor to have them. They’re looked at in our country as one of the top teams and being able to open the season against them in 2020 immediately sets a high bar. Watching our fans and giving our fans the chance to enjoy something like that is tremendous; we’re going to continue to try to grow the game here and try to represent Birmingham as proud as we can.”