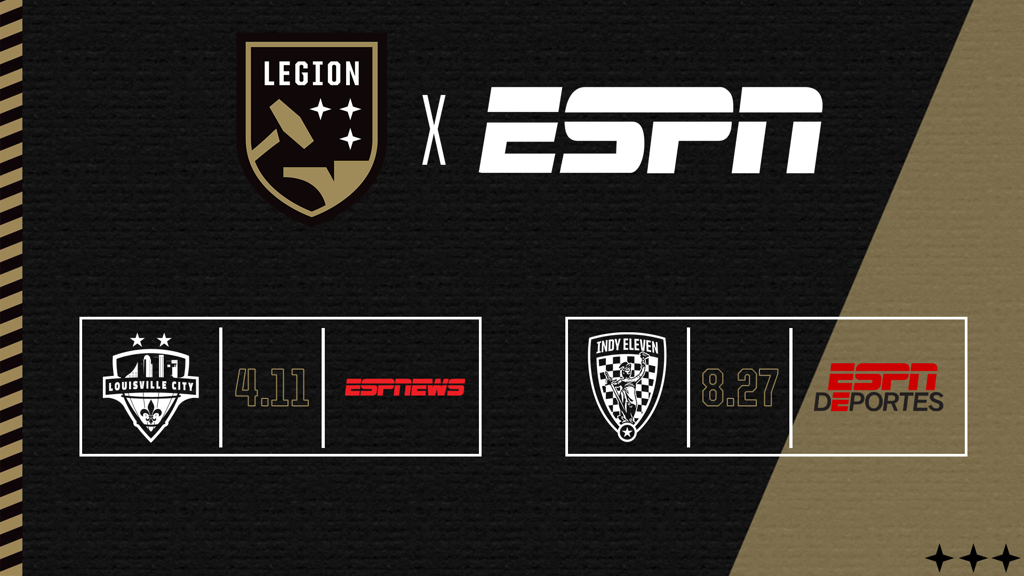 TAMPA, Fla. – The 2020 national broadcast schedule for the USL Championship  across ESPN networks was released today featuring 20-plus games on ESPN2, ESPNews and ESPN Deportes in the league’s 10th anniversary season. Coverage runs from March through November and will include 19 regular season games and the 2020 USL Championship Final on ESPN linear television networks.

Birmingham Legion FC will feature twice throughout the season, first at Louisville City FC as they unveil their new stadium on ESPNews on Saturday, April 11 at 6:00pm CT, and again at home vs. Indy Eleven on ESPNDeportes on Thursday, August 27 at 6:00pm CT.

As part of the new rights agreement reached between the USL and ESPN this past August, the Championship will have Spanish-language coverage of 10 games on ESPN Deportes, beginning with the Tampa Bay Rowdies hosting Pittsburgh Riverhounds SC on Friday, March 27 at 7:30 p.m. ET.

Overall, more than 590 games from the USL Championship will air on ESPN+, the industry-leading direct-to-consumer sports streaming platform, with coverage beginning on the opening day of the season, Friday, March 6. In addition, ESPN+ will feature more than 170 games from USL League One when its season kicks off on Friday, March 27.

About USL
The United Soccer League (USL) is the largest professional soccer organization in North America, possessing nearly a decade of experience in bringing the world’s game to communities across the United States and Canada. Overseeing the USL Championship, USL League One, and USL League Two, the organization is built on a proven and recognized model in international football and counts more than 100 clubs in its membership.

Based in Tampa, Fla., the USL has grown over the past decade into a model organization with strong corporate partnerships, stable organizational leadership, and a dedicated staff that provides outstanding support to member clubs and outside partners. Sanctioned by the U.S. Soccer Federation and Canadian Soccer Association, the USL is #UnitedForSoccer, moving the game forward in the United States and Canada.

Fans subscribe to ESPN+ for just $4.99 a month (or $49.99 per year) through the ESPN App, (on mobile and connected devices), ESPN.com or ESPNplus.com. It is also available as part of a bundle offer that gives subscribers access to Disney+, Hulu (ad-supported), and ESPN+ ­— all for just $12.99/month.