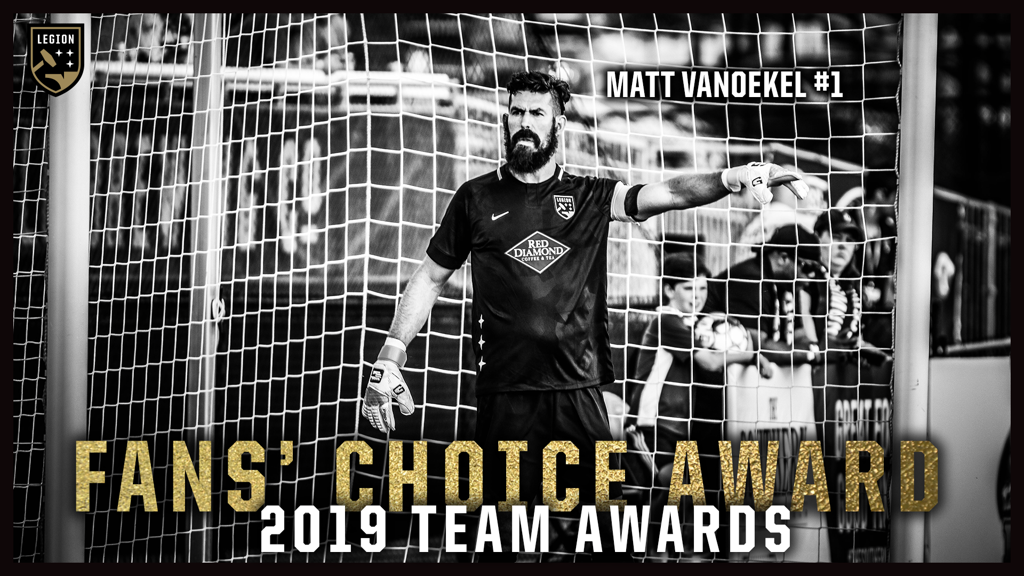 VanOekel has been a Brigade favorite since day one. "Since his signing was announced for the team, Matt has embraced being a part of the Birmingham soccer community and family surrounding Legion FC,” said Supporter’s Group capo, Nic Gulas. “He always has time to chat and his family has bought in, as well. His involvement off the field, coupled with his play on the field this season, made him a solid choice for our first Supporter's Player of the Year."

VanOekel, 33, who also serves as the Legion FC Goalkeeper Coach and official donut taste tester, was a rock at the back throughout 2019, as he was tied for fourth on the team in appearances (30) and was second in starts (30) and minutes (2,700). MVO’s 82 saves were 13th best in the USL Championship, and he was fifth in the league in clean sheets, with 11. He also racked up 30 clearances, five interceptions, 16 catches, 11 punches, and 831 passes.

“We are immensely proud of the entire team for a fantastic inaugural season, but Matt was a near-unanimous pick for our player of the season,” said Brigade member Simon Iles. “When you consider his leadership on and off the field and his performances during the team’s amazing shutout streak (establishing our shared love of “donuts”), it is little surprise that he quickly became a cult hero. We look forward to more seasons chanting “You’ll never beat VanOekel!”

One more 2019 Team Award, MVP, as voted by the players, will be announced this week. VanOekel joins Daniel Johnson, Mathieu Laurent, Prosper Kasim, and Mikey Lopez as award winners, with Kasim and Lopez winning the Golden Boot award and Defender of the Year, Laurent being named Newcomer of the Year, and Johnson earning the Community Engagement Award.