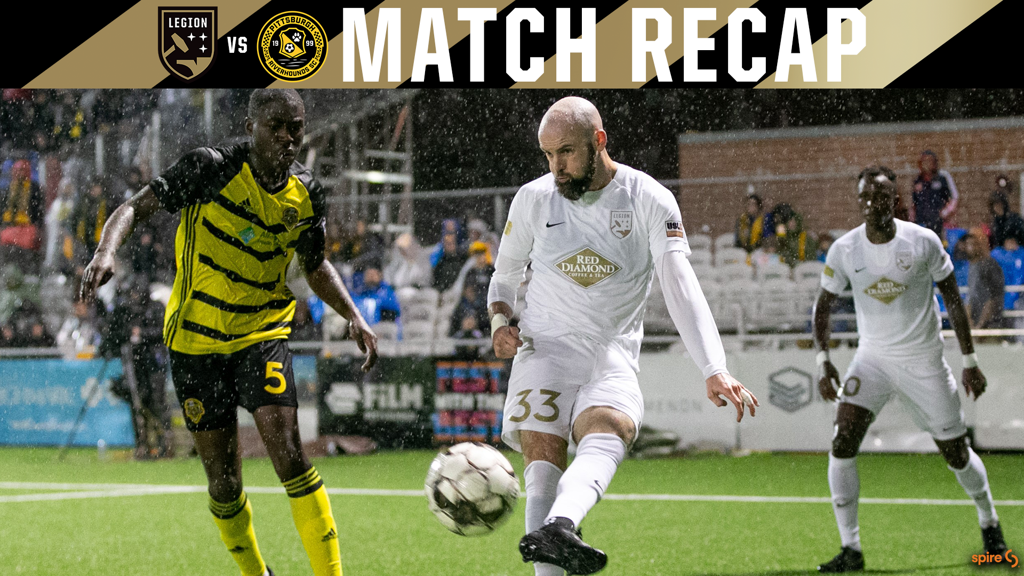 PITTSBURGH, PA (Oct. 26, 2019) – Birmingham Legion FC climbed a steep hill to make the USL Championship Playoffs in year one, and overcame two deficits in its first round matchup to make it to the Eastern Conference Quarterfinal, but a third game in seven days, in the rain at No. 1 seed Pittsburgh Riverhounds SC, was too tough of a wall to break through, even for the boys in black and gold.

The hosts enjoyed a bye week, came in fresh, and scored early to take control of the match at Highmark Stadium. Forward Neco Brett bagged four goals for the Riverhounds, including finishing off a dubious penalty call to make it 4-0 in the 34th minute, to lead Pittsburgh. A Legion FC red card from the referee made a comeback hard to fathom, but BHM fought hard to the bitter end.

Head Coach Tommy Soehn urged his guys to keep their heads up and was proud of the passion the group showed during times of adversity all season. He said, “I wasn’t sure how Wednesday [‘s win at North Carolina FC] would affect us, but I really think it took its toll. We put a lot into that and were hoping we could rebound, but today just wasn’t meant to be from the first whistle. You could see that we were a step slow to second balls, we weren’t clean enough on the ball and able to open things up, and to [Pittsburgh’s] credit, they were ready to capitalize in every aspect of that.”

“But I asked the guys to keep their heads up, real high, because there were a lot of really good moments this year - positives that we can build on – and I’m proud of where they got to. It’s not easy to do, building a team like that, and in the end, I asked them to keep their heads up and be proud of what they’ve accomplished. I know it’s going to hurt, but that’s the game. We’ll get back to work in the offseason and make it better.”

Soehn sees plenty of reasons to be confident going into year two, and explained that, “it’s been one of the most fun groups I’ve ever coached. I think the camaraderie within the group, the progress they made, the depth we have, through the course of the season the amount of injuries we faced we never dwelled on, and guys kept stepping up down to the wire. Even in our playoff run we had guys playing a lot of minutes that normally didn’t, so in the end I’m really proud of this group. I think there’s a lot to build off of, and I just ask these guys to hold their heads high and be proud of the season they had.”

When asked about his final thoughts on a successful inaugural season, Soehn just wanted to thank the fans and thank Birmingham. He said, “I just felt so good playing at home. I’ve said this, but they’ve grown along with us, and I hope it keeps growing into next year. We’re not a first-year team anymore, so we’re hopefully going to come out of the gate swinging. Hopefully they’ll be by our side, and we continue to grow that fans base and give them something to be proud of.”

Midfielder Mikey Lopez echoed his coach’s sentiments towards the fan base and was already looking forward to 2020. After the match he said, “Obviously it's really disappointing how the season ended, but we definitely accomplished a lot. A lot of people had written us off in the summer, but we stuck together, and we were able to make playoffs and win our first playoff game. We learned a lot from this year, and we will take these lessons into next year. We have a great group of guys and an even better core group. As long as we stay healthy, we will be a dangerous team next season, and I'm proud to be a part of this team. We want to thank all of the fans for sticking with us through thick and thin. We love y’all so much, and its honor for me to be captain of this team and to represent the city of Birmingham.”

For offseason news and team updates, be sure to follow @bhmlegion on social media, and keep an eye on bhmlegion.com.

Birmingham Legion FC 2020 Season Tickets are available now, and information can be found HERE, or by calling the Legion FC Ticket Office at 205-791-7145. Now is the time to Hammer Down and be #2020Committed.