After 3-2 victory at North Carolina FC, BHM will travel to face top-seeded Pittsburgh on Saturday 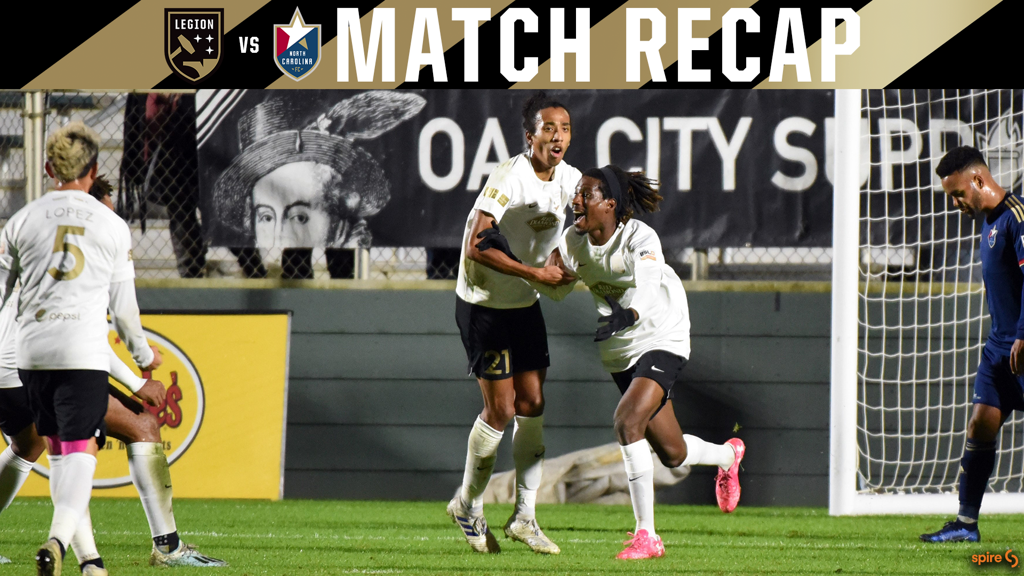 CARY, NC (Oct. 23, 2019) – Birmingham Legion FC are moving on in the 2019 USL Championship Eastern Conference Playoffs. In the team’s first-ever playoff game in this inaugural season, a 3-2 victory over North Carolina FC thanks to a 93rd minute rocket of a game winner from forward JJ Williams sends Legion FC on to the Eastern Conference Quarterfinals on Saturday and a date with top-seeded Pittsburgh Riverhounds SC.

North Carolina FC came into the match having lost only once at home all season, and got an early lead with a goal in the 19th minute, but Femi Hollinger-Janzen, who filled in at centerback tonight, got Birmingham back level with a goal in the 35th minute by turning a Prosper Kasim shot into the back of the net. Midfielder Daniel Johnson earned a freekick and then swung a ball into the back post, where defender Kyle Fisher knocked it down for Prosper. His shot from the top of the box made it through the scrum of bodies to Femi, who expertly poked it in to head into halftime tied 1-1.

The hosts came out and put Legion FC under pressure again to start the second half, and they capitalized with a nice goal from outside the box in the 59th minute but held onto the lead for an even shorter amount of time this go around as midfielder Zach Herivaux scored for Birmingham in the 66th. Defender Akeem Ward lined up a shot from outside the box, the NCFC ‘keeper parried it away but just to the top of the six-yard box, and Herivaux was quickest to react, pouncing on the spilled ball and slotting it home to tie the game again.

Legion FC fought back again and again and were the more dangerous side as the game wound down, right up to the final minute. Herivaux switched the ball and found Williams at the top right corner of the NCFC box with 15 seconds left in stoppage time, where #11 cut outside, then back inside onto his left, spinning two defenders like a top, before hammering a goal into the far left corner of the net for the winner.

Head Coach Tommy Soehn mentioned that this was just step one in the playoff journey but was very pleased with his group. After the match he said, “I think it’s a little bit of a carryover from our mentality against [New York] Red Bulls [II, on October 16], that every game now is playoff mentality. I was really pleased with our attack - we generated so many chances tonight against a team that hasn’t lost but once at home, probably the best home record in the East, and we laid three on them. Credit to them they are a good team. You could tell they are well coached; they play a style of soccer that’s easy on the eyes, and I knew it would match up well with us. So, credit to them, but I really enjoyed our guys performance, the effort they put in defensively, and then how we turned that into chances.”

When asked about how his team could come back from down a goal not once, but twice, and then still have the fight and energy to find the game-winner late, Soehn said, “I think it’s part of our mentality, this whole second half of the season has kind of been like that where we just believe. Everybody has contributed and even the guys that didn’t get in tonight stuck together. Our locker room has been through thick and thin. I’ve been fortunate to be on a lot of teams, you can always tell by the locker room if you have a chance to do special things, and this locker room is one of my favorites I’ve been in.”

Williams agreed that the team has a strong belief in each other and was excited to get to play playoff soccer. He said the team coming back to win was huge for building confidence moving onto the quarterfinals. “[To come back and win], it shows a lot. We were in a very tough stretch earlier in the season, and for us to fight back to get into the playoffs and have a performance like this shows a lot. I think we’ve shown this character since the halfway point of the season where we turned things around, that’s just the identity of this team.”

“The playoffs always have that energy when you come into it, but I think we prepared really well coming into this game. We had fresh legs and it was really all about the energy. It was all about getting more shots on goal, more shots on frame, and creating more offense than we have these last couple of games; that was our main focus coming into the game today.”

With the win, Legion FC heads to Pittsburgh to play Saturday night, and after playing them just last weekend, Coach Soehn thinks his guys are ready for the challenge. He explained that, “The group we put out [on Sunday, October 20] will not be the group that they’ll see [on Saturday], so we were able to evaluate and do some game prepping on them. Obviously, it’ll be a little tougher on the road, because I’m sure they’ve got a really good home record as well, but we’ll watch a lot of film, we’ll put together a game plan, and our guys will be ready to carry it out.”

Williams when he was asked how the Legion FC attack was so dangerous and effective on the night:
“I can speak for myself when I say that playing with very talented guys makes things easier for me, and Brian as well, whenever they put us in a good position to score; getting some help from Femi tonight with his goal was great as well. I think it helps a lot knowing that when prior to this week we were struggling going forward, we’re now able to focus on making our movements crisp and creating full-chances instead of half-chances or little looks. I think we really focused and buckled down when it comes to moving forward and my teammates put me in a great position to be successful.”

The team will head straight to Pittsburgh to face the Riverhounds on Saturday night with kickoff scheduled for 6:00pm CT. The match will air live in Birmingham on My68, and game updates can be found on social media leading up to Saturday night at @bhmlegion and on bhmlegion.com.