After 1-0 defeat, BHM will travel to North Carolina on Wednesday for first round of USL Championship playoffs 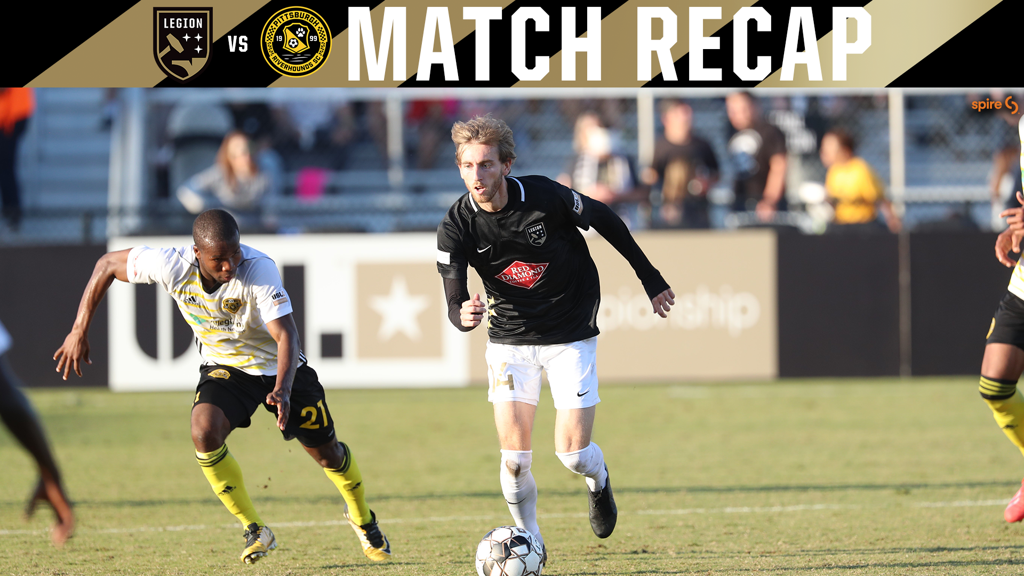 BIRMINGHAM, AL (Oct. 20, 2019) – Birmingham Legion FC fought hard but Pittsburgh Riverhounds SC got the goal they needed in the last minutes of the match to win 1-0 in the final USL Championship regular season game of the year.

Coming into the day, Legion FC already had a playoff spot locked up, courtesy of Saint Louis FC’s loss last night at North Carolina FC, and Head Coach Tommy Soehn took full advantage of the opportunity to rest some guys before the postseason. Seven different players came into the starting XI and stifled the Riverhounds attack for 89 minutes.

In the final minute of regulation, Pittsburgh centerback Joe Greenspan chipped a ball from near the halfway line all the way into the Birmingham box, and midfielder Mark Forrest’s header from the edge of the box looped up in the air and bounced into the goal.

Soehn thought his guys deserved a better result, and said, “I was disappointed for them because they put so much into [the match], but it was a great opportunity for some guys to get some minutes so we could really see where they’re at from a year of putting work in every day. I give those guys a lot of credit because they don’t get some of the minutes that other guys do; they stepped up today against a really good team. Credit to Pittsburgh, they hung on until the end and got three points, but I really respect the fact that our guys did a really good job considering that a lot of those guys don’t have a lot of minutes on the year.”

The win gives Pittsburgh first place in the Eastern Conference and another date with Legion FC, if Birmingham make it to the second round of the USL Championship playoffs next weekend.

The first round kicks off on Wednesday, October 23, and by finishing as the No. 10 seed in the East, Legion FC will head to Cary, North Carolina to take on North Carolina FC at 6:00pm CT. The match will air locally on My68.

When asked about the looming playoff matchup with North Carolina and how he feels about his squad’s ability to make a run, Soehn said, “I feel like we match up well…I think going to North Carolina is a little bit easier than going to Canada. I respect [North Carolina FC], they do a really good job of knocking the ball around and I think they’re similar to us. It’s going to be a really good match and we’re excited to get to it. We were able to afford some guys some rest so having fresh legs will be really important come Wednesday.”

“I’m obviously really happy for the group because with the start we had there was a major mountain to climb. We put ourselves in a situation that with a Saint Louis loss we got in, so the guys earned that right. I’m really proud of the guys, it’s not easy to turn a season around and they did it. To their credit, I sure wouldn’t want to play us in the playoffs. We’re excited about the opportunity, and I guarantee you they’re going to be hungry come Wednesday.”

Midfielder Joe Holland got the start against the Riverhounds and is confident in his team heading into the playoffs. He explained that, “the fact that we’ve improved as we went on is a big factor, that’s always the sign of a good team. Especially in the American system of the playoffs you want to be hitting your stride when it gets toward the end of the season, and we did that. The second half of the season our win ratio was a lot higher and that’s a positive. We feel good going into the playoffs with that momentum.”

Legion FC enjoyed a successful inaugural season in 2019, thanks in large part to the support of the fans and of Birmingham. 2020 Season Tickets are available now, and information can be found HERE, or by calling the Legion FC Ticket Office at 205-791-7145. Now is the time to Hammer Down and be #2020Committed.