Match Recap: Legion FC rises to the occasion to knock off New York 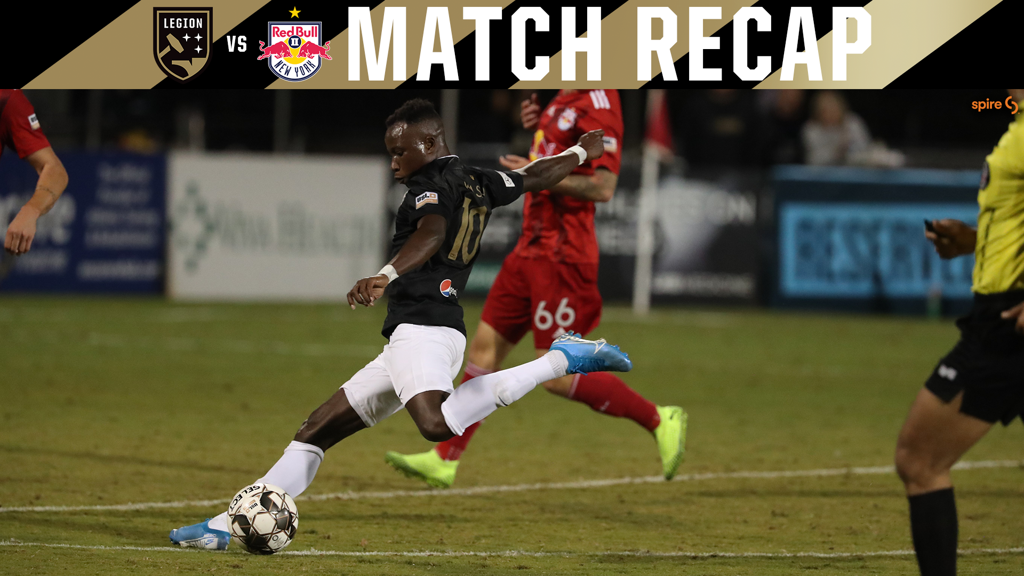 BIRMINGHAM, AL (Oct. 16, 2019) – Birmingham Legion FC jumped on the visiting New York Red Bulls II early and never looked back, fighting through a red card and an own goal to win 2-1 on a cold night at BBVA Field.

The same starting XI that fell at Hartford last week came out with a point to prove and a playoff spot within its grasp, and the high energy and intensity level was apparent from the opening whistle. Legion FC took the lead in the 10th minute to capitalize off the early pressure, as midfielder Daniel Johnson played forward Brian Wright in behind the Red Bulls backline. Wright shrugged off a defender, then coolly faked out the goalkeeper before rounding him and passing the ball into an empty net.

Birmingham had a few more dangerous chances in the first half, including a Femi Hollinger-Janzen goal that was just ruled offside, but the other notable highlight was a red card ejection that the referee issued to Legion FC defender Kyle Culbertson in the 42nd minute. After clipping the heels of a New York forward at the top of the box, Culbertson was issued a yellow card caution, but the referees convened and then changed the decision to a straight red, putting the home side down to ten men for the rest of the contest.

Not to be denied, Legion FC came out with its foot on the gas again to start the second 45, and midfielder Prosper Kasim found the back of the net 31 seconds into the half. Midfielder Anderson Asiedu played a first-time long ball across to the pitch to Kasim, who cut outside before rifling a shot through the defender’s legs and into the far bottom corner to extend his team’s lead to two.

Being down a man, Birmingham had to repel a robust New York attack again and again in the last half hour of the match, but the only goal the visitor’s could manage was not even scored by themselves, as a flick on from New York deflected off of defender Kyle Fisher’s extended shin and looped up into the goal. Goalkeeper Matt VanOekel made a few huge saves in the dying moments of the game, and Legion FC completed a well-earned, hard-fought victory to move into ninth in the USL Championship Eastern Conference standings with one match remaining.

Head Coach Tommy Soehn pushed his guys hard this week to come out with a sense of urgency and was pleased with the group’s effort and intensity. He said, “I saw a difference in our group today, right from the first whistle. The commitment to defending and making a play was a collective effort, it wasn’t just one guy; it was our frontrunners doing the business and making it hard for their backs, we won a lot of balls, and we created a goal early which now opens teams up. It’s unfortunate we were down a man because I think we were really in control of the game. Obviously, that changes the whole perspective, but even through that I credit our guys for the discipline and the fight that they showed to hold the fort down in difficult circumstances.”

When he was asked about the continued, rowdy fan support urging his team on on a night like tonight, Soehn said, “I think you could hear their enthusiasm and the disappointment in the officiating, of which I kind of felt the same. In the end, being at home is always a blessing and our fans are amazing. Credit to them, they helped us a lot tonight.”

Kasim agreed with his head coach, and said, “I think the atmosphere was great. We love the fans and love when they come here in numbers. I think that also motivated us to keep pushing, even when we were tired. You hear them screaming and yelling, which is the feeling we want all the time. I think their support is awesome.”

After his game-winning goal, Kasim helped propel Legion FC that much closer to a postseason birth in this inaugural season, and he believes the group can go far. When asked about the potential for making the playoffs, he said, “well I think we still believe in each other, and we keep working because we know who we are as a team. No matter what, working hard pays off in the game. We keep pushing no matter what, and I think that helped us tonight.”

Legion FC returns home for the final 2019 regular season match looking to clinch a playoff spot on Sunday, October 20, as the team takes on Pittsburgh Riverhounds SC at 4:30 pm. Tickets are available at bhmlegion.com/tickets or by calling the Legion FC Ticket Office at 205-791-7145.