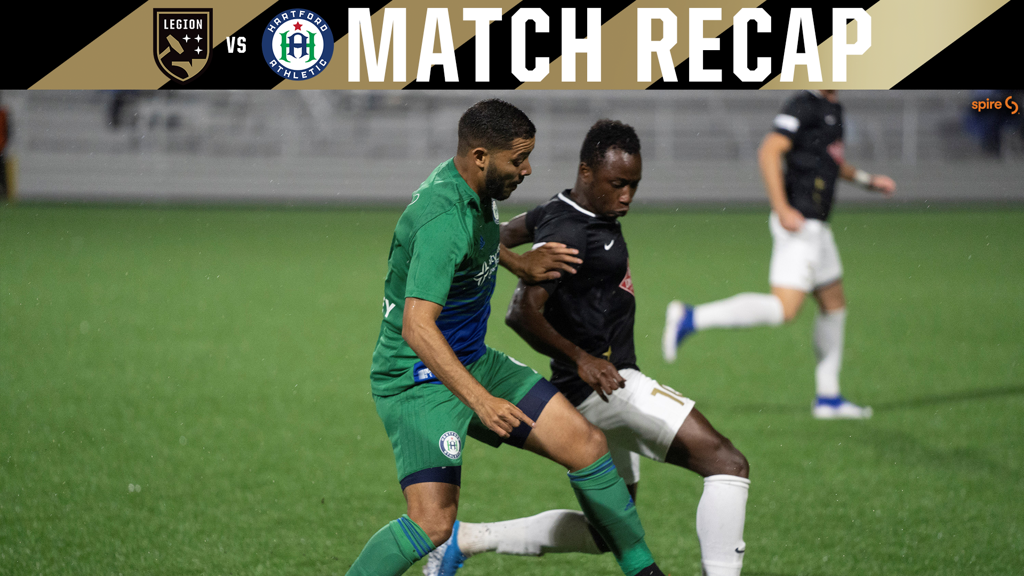 HARTFORD, CT (Oct. 9, 2019) – Birmingham Legion FC could not capitalize on a handful of chances in a lively first half, and then fall victim to a clinical Hartford Athletic side in the second part of the contest for a 4-0 defeat.

The hosts, one of seven expansion teams in the league this season along with Birmingham, had allowed the second-most goals in the USL Championship coming into tonight but stood resolute at the back all evening. A counter-pressing and counter-attacking system worked well against a Legion FC side that had been stout themselves defensively in recent months.

All four goals for Hartford came with BHM pressed high up the field in the second half, and all four goals found the back of the net in a 30-minute window from four different goal scorers. 2013 USL MVP Jose Angulo got the first in the 56th minute, Danny Bedoya bagged the second in the 62nd, Daniel Bedoya scored the third in the 81st, and substitute Wojciech Wojcik added the dagger in the 86th.

The match looks to be an opportunity missed by Legion FC, who still sit in 10th place in the Eastern Conference standings, as ninth place Saint Louis FC were knocked off by Loudoun United. With two home games to go, Birmingham still has a good chance to make the playoffs, but now 11th place Charleston Battery have a game in hand.

When Head Coach Tommy Soehn was asked about the match tonight, he did not mince words, but remains confident in the group with two matches to play. He said, “Obviously tonight was a tough pill to swallow. I thought we deserved more coming out of the first half. We played well, with good energy, and obviously we made a mistake and they punished us, and then we opened up and went for it even more and left ourselves exposed.”

“There’s not too much for me to say obviously after tonight, but we’ve got a week now to prepare for [New York] Red Bulls. There are six points still out there on the table to go get, so that’s what our focus has to be. As hard as tonight hurt, the guys are still sticking together, and we’ve got two more games to go. We’ll watch the results a little bit, and hopefully we get some favors.”

Next Wednesday the guys host New York Red Bulls II in the penultimate, pivotal match at BBVA Field, and Soehn urged the home fans to show out and get loud by saying, “Home support will be massive. One thing that’s happened through this stretch is it’s continued to grow. I think when the guys feel that energy that we get from our fans it just inspires them, and they continue to get better and better. Hopefully we pack the house, our guys come to play, and we get some points against Red Bulls and Pittsburgh [Riverhounds].”

Midfielder Daniel Johnson echoed his head coach and said, “The fans this year have been amazing. Honestly, it’s been incredible to be a part of. It’s something that I never expected from a city of this size, in the South, but they’ve really taken to it and it helps us more than they even think.”

“That old adage that they’re the twelfth man couldn’t be more true in our case, because when the fans are there and are cheering and chatting and going back and forth with the ‘Hammer Down’ it just drives you to make that extra sprint, that extra tackle and fuels us on the field. For the fans that come and haven’t played a sport at the professional level, understand the importance that you guys have. You’re coming to the game to watch, but you’re a part of it in a big way.”

Johnson is also confident in his squad, and he explained, “Going into the last two games I’m really confident in our group because we’re a group that’s shown that we can do it against the best teams in this league. We went on that run and that wasn’t a fluke. We’ve shown we have the quality; we’ve shown we have the strength and mentality that we can beat anybody when we get all the little things right and show up as the team that we know we are.”

Legion FC returns home for the make-up match with New York Red Bulls II on Wednesday, October 16 at 7:00pm. If anyone still has an unused ticket from the original match that was cancelled due to weather on April 6, it will be honored on the 16th. Contact Allison Cochran at acochran@bhmlegion.com with any questions or concerns. Tickets are otherwise available at bhmlegion.com/tickets or by calling the Legion FC Ticket Office at 205-791-7145.