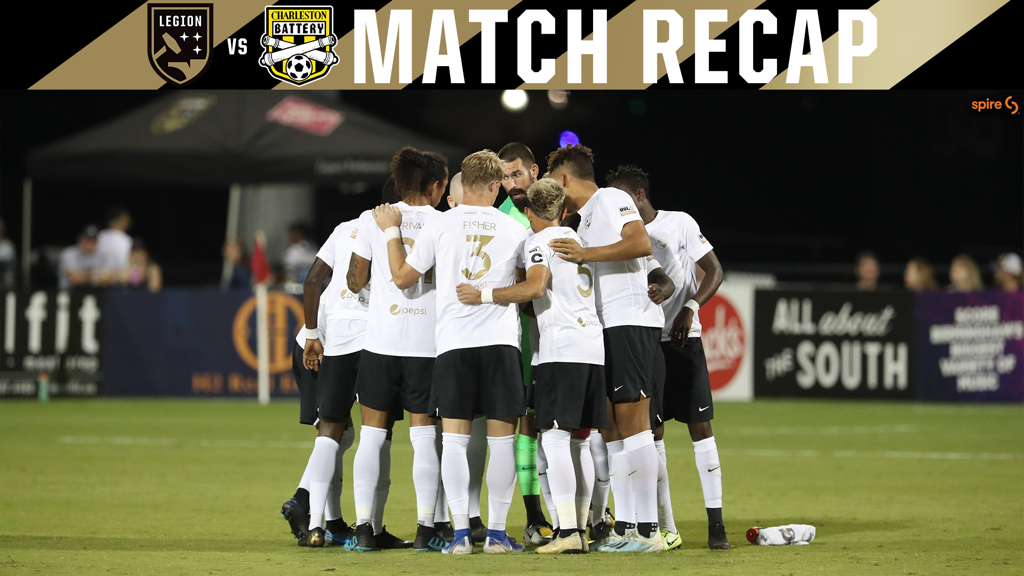 BIRMINGHAM, AL (Oct. 5, 2019) – Birmingham Legion FC drew against the Charleston Battery, 0-0, in the rain in a matchup between the two teams fighting for the final playoff spot in the USL Championship Eastern Conference.

The first half played out evenly, as both teams went into the locker rooms at halftime having taken eight shots each, and then the bottom dropped out, resulting in a roughly 45-minute severe weather delay. Legion FC came out of the break full of energy, and then were aided by the sending off of Charleston forward Atualla Guerra in the 59th minute due to a red card for a hands-to-the-face foul on midfielder Zach Herivaux, but still could not manage to find the breakthrough.

The home side out possessed the visitors 62.1% to 37.9% and outshot them 11 to three in the second half, but a heavily bunkered Battery team managed to block six of those second half shots and not allow Legion FC any room to work in the Charleston box.

Head Coach Tommy Soehn said he knew Charleston were a defensively sound team, but still disappointed with the result at home. He said, “I think the disappointing end is that I knew they were going to sit in because that’s who they are on the road, they get a lot of ties from it, but I felt like we have enough creativity to break them down and we just couldn’t today. Even the lack of quality chances was there so we feel like it’s a loss, unfortunately. We didn’t hurt ourselves; we didn’t help ourselves, we’re in the same place as we were, but disappointed. You could hear a pin drop here in the locker room; everybody is pretty disappointed.”

When asked about the mindset of the squad heading into a matchup with Hartford Wednesday, Soehn said, “We’ve got three games [left] and fortunately we control where we end up. The disappointing thing is we got a couple opportunities to really help ourselves and we haven’t, so now we really have to buckle down and make sure we take care of the three teams we have left.”

Defender Kyle Fisher, who led the team in blocks and interceptions, added to his Coach’s point by saying, “We can’t overlook anybody. We learned that last time against Swope, and that was just a bit of immaturity from us as players. We still have to focus on the first half of Hartford and take the next 45 minutes as they come, but we can’t look at the full picture of the result; we’ve got to make sure we focus on our performance, and if we don’t do that then the result won’t go the way we want.”

The boys’ hit the road again for a crucial match against fellow expansion side Hartford Athletic on Wednesday, October 9 at 7:00PM. Follow @bhmlegion on Twitter for live updates of the match and watch on ESPN+.

Legion FC then returns home for the make-up match with New York Red Bulls II on Wednesday, October 16 at 7:00pm. If anyone still has an unused ticket from the original match that was cancelled due to weather on April 6, it will be honored on the 16th. Tickets are otherwise available at bhmlegion.com/tickets or by calling the Legion FC Ticket Office at 205-791-7145.