Join us for Wizardry Night at BBVA Field! Legion FC Plaza opens at 5:30 - kickoff is scheduled for 7:00 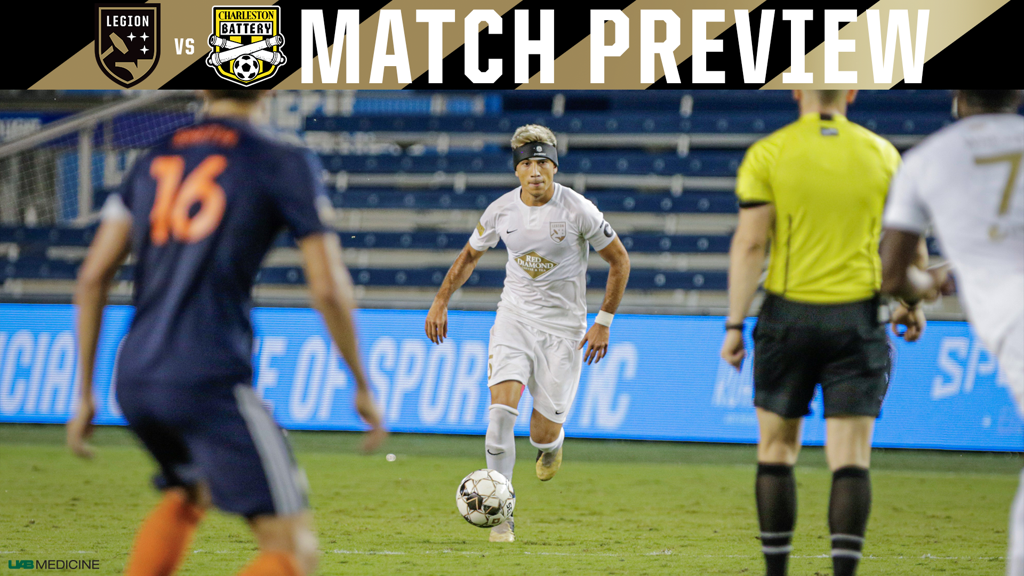 Legion FC looks to take a vital step towards making the playoffs in the biggest match of this inaugural season against the visiting Charleston Battery.

BHM has eight shutouts and has outscored opponents 19-9 in the last thirteen matches, going 8-2-3, but is still tied on 39 points for the last spot in the postseason with three matches left. Head Coach Tom Soehn mentioned that the team is excited, and said, “We’ve talked about this being a playoff type game, but also maintaining a consistency throughout the remainder of the season – not the highs and lows that we have had. That’s been the message.”

Charleston Battery currently sit in 11th in the Eastern Conference standings since the tiebreaker in the USL Championship is total wins, of which BHM has 11 and CHS has nine, but have rattled off a couple solid wins, over North Carolina and Indy, in recent weeks. The team only has three road victories this season, but the first time these two teams met, the Battery won at home, 3-1, in June.

CHS has relied on a solid defense, currently in the top half of the league in goals allowed, to help buoy a struggling attack that have scored just over a goal a game (36) on the fourth-least shots in USL. The defense is anchored by goalkeeper Joe Kuzminsky who is sixth in the league in saves (80), and the attack is led by Zeiko Lewis who leads the side in goals (6), shots (42) and chances created (34).

When asked about the weight the coaching staff puts on the season’s prior meeting versus a team as opposed to watching more recent tape, Coach Soehn said, “I think that’s hard because we have morphed into something different. I think on set pieces and stuff you can bring that stuff in, but in the end I think you just look at the bigger picture of what they’re about, and make sure we know what were about. We make sure we take care of all the little things on game day – the competitive edges, the tackles, duels won, interceptions, penetrating runs, offensive half recoveries, blocked shots, key passes, all the things that win you games.”

According to Soehn, this match has a playoff feeling, which helps motivate the team to refocus after a tough loss last week. He said, “I think it’s simple – it’s about understanding the importance of the match and understanding our opponent. We have to know that they have been a team that’s been around the USL for quite a long time, they have a very unique identity, and they have a way of making things difficult on us. As far as our mentality even before the game starts, we have to be in the zone. If we are, our chances are really good, and if we’re not up for it we’re going to run into a team that believes so we have to take that belief out of them.”

The boys’ hit the road again for a crucial match against fellow expansion side Hartford Athletic on Wednesday, October 9 at 7:00PM versus the Charleston Battery. Follow @bhmlegion on Twitter for live updates of the match and watch on ESPN+.

Legion FC then returns home for the make-up match with New York Red Bulls II on Wednesday, October 16 at 7:00pm. If anyone still has an unused ticket from the original match that was cancelled due to weather on April 6, it will be honored on the 16th. Tickets are otherwise available at bhmlegion.com/tickets or by calling the Legion FC Ticket Office at 205-791-7145.