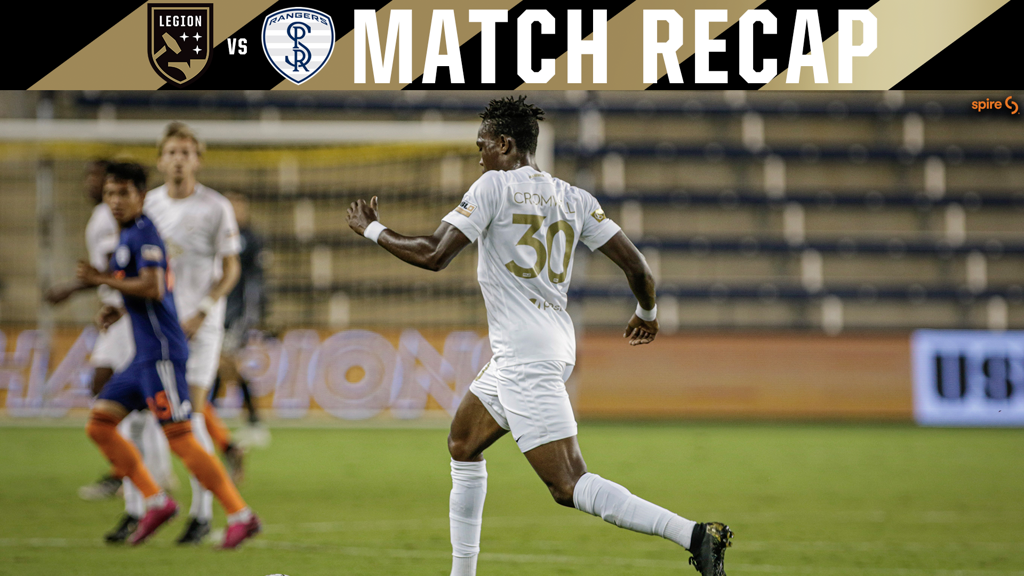 KANSAS CITY, KS (Sept. 30, 2019) – Birmingham Legion FC travelled to Kansas City to face the Swope Park Rangers and leave with the lingering bitter taste of defeat, 3-1 behind two early goals from the home side.

Bolstered by seven Sporting Kansas City loanee’s sent down for the home match, Swope Park jumped out to an early lead after Wilson Harris scored his eighth goal in nine games in the 7th minute. The Rangers added to their lead in the 28th minute after being given a penalty and burying it.

Forward JJ Williams scored his team-leading seventh goal of the season just moments before the break to pull Legion FC back into the match. The visitors earned a free kick in the center of the Swope Park half after a harsh foul on midfielder Zach Herivaux. Centerback Razak Cromwell delivered a swinging ball into Williams at the top of the box, and after breaking free from his mark, he expertly tucked his header into the bottom right hand corner past a helpless SPR goalkeeper.

The boost gained from Williams’ goal did not prove fruitful in the second half, despite some early pressure and chances from Legion FC. Then forward Brian Wright was sent off in the 76th minute after shoving an SPR player. The shove seemed to bounce off the Ranger’s chest or shoulder, but the referee issued a straight red card for hands to the face/violent conduct. Swope Park answered with a quick counterattack goal to shut the door in the 79th.

Legion FC Head Coach Tommy Soehn was asked about the Swope Park performance, and how the guys on loan from Sporting might have affected the game, and he said, “I don’t want to talk much about them, because that’s going to happen now and then – whether they get those guys in or not.”

“The disappointing thing was we had tactics, we were going to press, and we weren’t able to pull any of it off. We were just really poor on the day, from minute one with no energy, and it didn’t get much better throughout the whole game, and that part’s disappointing because we could have made some ground [in the playoff race] and now we keep everybody around and put more pressure on ourselves. So that was disappointing.”

When asked about the looming fixture with Charleston and if that may have been a distraction, Soehn said, “to be fair, I don’t know what it was, because I thought we had a really good training session yesterday. None of that carried into the game today. We just need to regroup and make sure we don’t make all the same mistakes we made today. A lot of it will be mental preparation to make sure we understand what’s at stake.”

The boys’ next home match is Saturday, October 5 at 7:00PM versus the Charleston Battery. After tonight, the Battery are in 11th, just one spot behind Legion FC in the tenth and final playoff spot, but even on points this season, with 39. With only four games remaining on the schedule, the clash with Charleston will be the most important match of the season with regards to making the postseason. Tickets are available at bhmlegion.com/tickets or by calling the Legion FC Ticket Office at 205-791-7145.