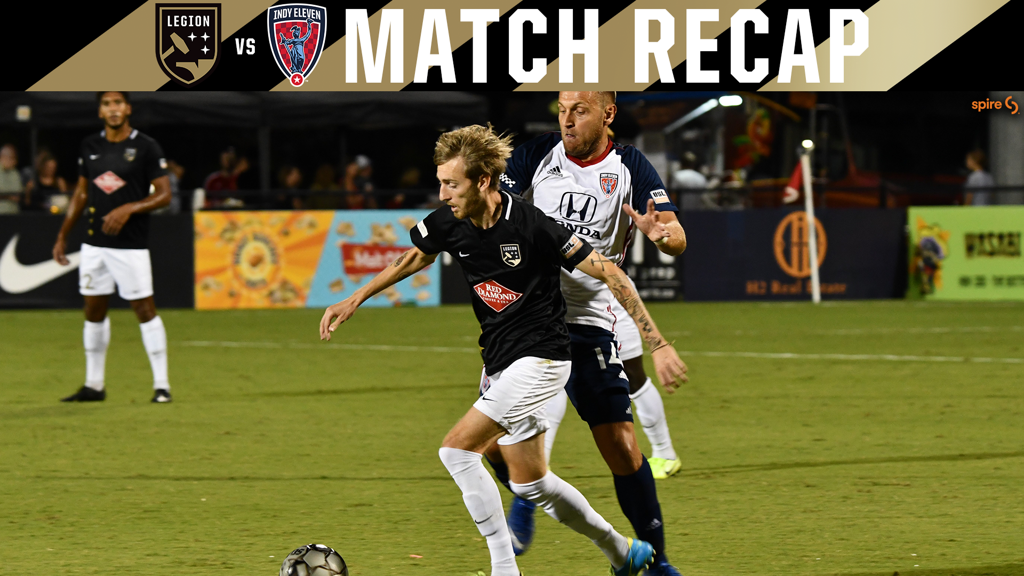 Indy came into the match at BBVA Field tied with New York on points at the top of the table and with the league’s best defense, but it was Legion FC’s defensive effort that won out on the night, as the visitors only managed to register one shot on target all match. Goalkeeper Matt VanOekel was again up to the challenge, earning his tenth shutout of the season.

The game-winning goal hit the back of the net in the 39th minute courtesy of Birmingham’s main man up top, Wright. Legion FC’s constant pressure throughout midfield led to a lot of Indy turnovers, including the turnover that setup the goal. Defender Akeem Ward was pressed high in the Indy half and picked up the ball at the edge of the box before chipping it in for Wright to smash home at the back post.

Indy picked up a red card in the 53rd minute for a heavy challenge, dropping them down to ten men for the rest of the match. Legion FC managed five shots in the first half before the one-man advantage but then racked up nine more in the second half, adding up to seven shots on target, and were unfortunate to not put in a couple more goals.

Head Coach Tommy Soehn mentioned that the team needed to continue to work on putting team’s away when creating so many chances but was pleased with how hard the team fought after two tough losses and playing on short rest. He said, “I think when you look at the Nashville game [on Tuesday], it was a tough one to lose in the last minute. We’ve got three games in eight days, and they’re [Indy] coming out fresh. We knew it was going to be a challenge, but we also knew that we could bounce back, especially at home.”

“I credit the guys because we faced a lot of adversity today; Mikey [Lopez] going down, and Mathieu [Laurent] as well. Hopefully Mathieu is okay, he’s had a great season to this point. It’s costly because we’ve relied on him so much. When you look at the way we adjusted, the guys coming in have done it all year. We haven’t talked about injuries because it’s the next guys chance to make a difference. We needed these three points, and they’re [Indy] a good team for a reason. To be fair, we should’ve made it a lot easier on ourselves by finishing those chances. It’s a little bit of a frustrating thing because we still have to figure out how to put teams away. Again, we needed those three points and it is massive for our playoff chase.”

When he was asked how the team created so many quality chances, before the red card, against a defense like Indy’s, Soehn said, “Well, we knew we had a lot of work behind us, we had three games so this third game we really wanted to be really organized. I feel like that created a lot of problems for them, it created turnovers which we turned into chances. We were unlucky not to finish a couple earlier on, Brian had really good looks. But again, I credit the guys, we had a game plan and they pulled it off. Guys came out and new guys came in and still pulled it off. First time we’ve played against 10-men and I don’t think we did a good enough job with that, but that becomes another thing we can work on.”

According to Wright, the goals and games do not always have to be pretty, but that three points are vital. When asked about the team’s performance, he said, “We’ve been talking all week about how we’ve had three games now in eight days. Obviously two bad results, with a heartbreaking one on Tuesday, so we were really looking forward to bouncing back against a good team that is top of the table right now. With the games we have now we control our own fate. We’re happy with how we played today. Sometimes it has to be ugly, but we gutted it out and we were able to get three huge points at home.”

After a much-deserved break, BHM returns to action in Kansas City versus the Swope Park Rangers on Monday, September 30 at 7:00 PM CT. Follow @bhmlegion on Twitter for live game updates from Kansas, and watch live on ESPN+.

The boys next home match is Saturday, October 5 at 7:00PM versus the Charleston Battery. As of this week, the Battery are in 11th, just one spot behind Legion FC in the tenth and final playoff spot, so with only five games remaining on the schedule the clash with Charleston could be the most important match of the season with regards to making the postseason. Tickets are available at bhmlegion.com/tickets or by calling the Legion FC Ticket Office at 205-791-7145.