A stout defensive performance overshadowed by a 93rd minute own goal 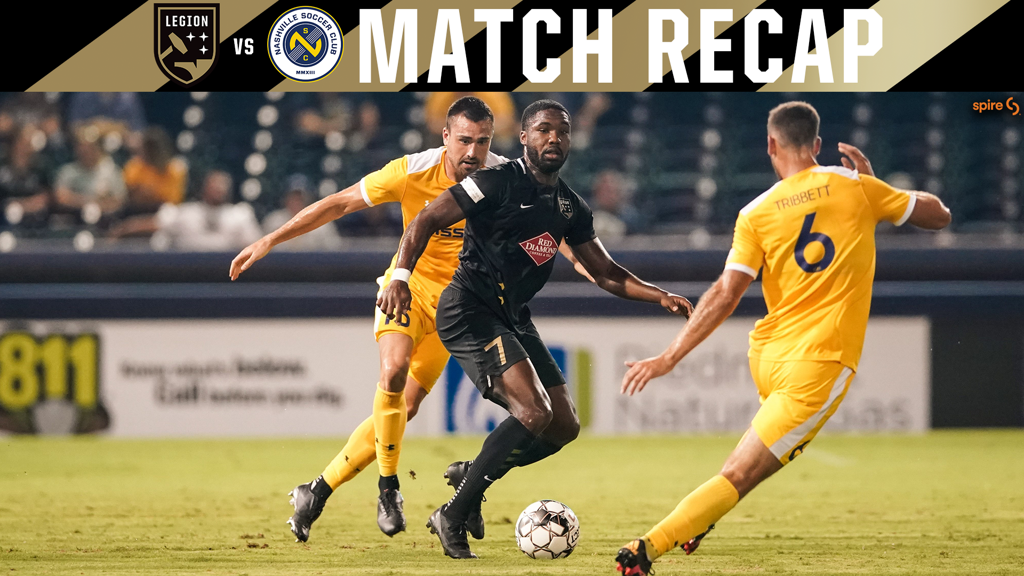 NASHVILLE, TN (Sept. 17, 2019) – Birmingham Legion FC dropped a heartbreaker at Nashville SC, losing 1-0 after Nashville got a goal in the final minute of the match.

Birmingham left everything on the field for over 90 minutes and were set to take a point back home. But in the 93rd minute, Nashville earned a corner kick, and somehow after bouncing around through a scrum of bodies in the six-yard box, the ball inched its way into the side-netting. The USL Championship deemed the final touch to come off a Legion FC player, making the loss even more hard to swallow.

The home side led in most statistically categories on the night, but only had a couple of dangerous opportunities all match before the one in the final minute. That result takes Nashville to third place in the Eastern Conference and means that against that quality of an opponent, BHM played 180 minutes across two legs and lose 2-0 on aggregate thanks to just a penalty and an own goal.

As one might guess, Head Coach Tommy Soehn said the result will be a tough one to get past, but he felt like his team did well to limit Nashville’s attack. He said, “We gave one up that was a set piece which really was all they were able to create opportunities on, and we were unfortunate at the end. You almost thought it could’ve been a foul, since both hands were on Kyle [Culbertson]’s shoulders and impeded him from going up for the ball. So, there were some tough decisions that the referee had to make, and he didn’t make them tonight, but it was no fault of our guys. I thought our guys gave everything they had, so I was really pleased with the effort and performance following a loss at home.”

“I think the last game I felt like we came out and didn’t understand what these types of games are like [fighting for the playoffs], and this time I felt different. I felt like the guys really showed up and competed hard – that’s what makes it so gut-wrenching to give one up in the last minute of play or so. It hurts, but I really commend the guys for their response after the last game. We knew it was going to be difficult here in a tough environment, and I think we came out and matched them. I felt hard-pressed that we didn’t come out with at least a point, because I think the guys earned it tonight.”

When asked how the backline was able to shut down Nashville for at least the first 92 minutes of the match, defender Kyle Culbertson said, “I thought we did pretty well through the run of play, and I think a lot of that came down to communication throughout the team.”

“The midfield and forwards did really well to cut down some of the key passing lanes and then as a back four, or five if you include Matt [VanOekel], I thought we did really well in communicating and being able to stay organized and keep our shape like we have talked about all week in training. Credit to both [Kyle] Fish, Mathieu [Laurent] and VanOekel, because a lot of that organization and communication comes through them. I think we would still like to have limited the amount of set pieces we gave up and done better with dealing with them. I think throughout the game we knew that’s where they would be dangerous, but that’s an area I know we will look at the next couple days and try to get better in before Indy [in Birmingham on Friday].”

The boys return home to take on Indy Eleven at BBVA Field next Friday, September 20 at 7:00PM. Tickets are available at bhmlegion.com/tickets or by calling the Legion FC Ticket Office at 205-791-7145.