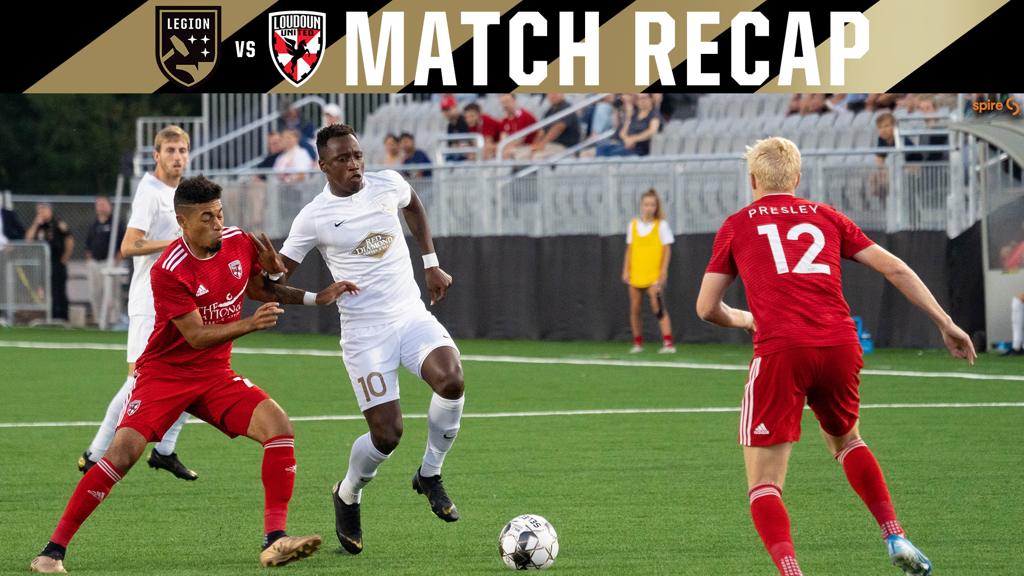 Coming in without a half dozen or more key players due to injuries and suspensions, the visitors only sent out a 16 man roster to take on Loudoun, but it did not seem to matter early on in the first half, as the frontline duo of Brian Wright and JJ Williams put Legion FC ahead going into the break. Wright held a long ball up nicely, then spun two defenders and carried it 60 yards into the opposing box before laying off for Williams to walk into an empty net. #11’s fifth goal of the season ties him with Prosper Kasim for the team lead.

Loudoun were on the front foot to kickoff the second half and scored in the 47th minute to level the match. Birmingham had a handful of dangerous chances after the break, and Williams even seemed to bag his second goal of the night before he was called back for being just offside, but the visitors ultimately settled for the solid road point.

Head Coach Tommy Soehn said the guys were disappointed not to head home with all three points. He explained that, “over the course of having to play [at Bethlehem] on Sunday I think we felt it today. We didn’t even get close to our normal sharpness. The guys came in after the game disappointed that they didn’t come out with three points. Which, honestly, is a big step where we expect to win these games.”

“The first half of the season we were just looking to be in games, so for the guys to walk away disappointed it tells you we’re in a much better place. And to be fair, we should be disappointed because it wasn’t our best. But now we head home, get some rest, obviously we’re going to get some guys back, get back to work and look forward to getting after it next Wednesday [at Atlanta].”

When asked about how important it has been to have all of the loanees back full time the last couple of months with regards to the Williams goal and his connection with Wright, Soehn said, “I actually think if they have an even better understanding of themselves then we can create a whole lot more for them by playing off of each other. We had a video session just this week about them playing off each other, so I think there’s a lot of room for improvement for those two. But obviously having all those guys here regularly is important because you build chemistry – not just them, everybody. It even helps the guys that are here full time and creates a better understanding of what we’re trying to accomplish.”

Williams on his partnership with Wright and the run the team has been on:
“The partnership has grown a lot and Brian does not get enough credit, for him to be able to turn that guy and give me a layup for the goal, but the team does a great job in putting us in good positions to attack.”

“We’ve all figured each other out more, building better connections because some of the MLS guys are staying here, so gives all of us a chance to build relationships with the rest of the team, as well as some of the adjustments the coaching staff has made have been phenomenal. A lot of credit goes to them always creating a game plan to give us a chance to win. The defense isn’t giving up many goals and when we do that we are hard to beat.”

The final stop on this three-game road swing kicks off in the Peach State against Atlanta United II on Wednesday, September 4. The game will air live on ESPN+ at 6:30PM CT. Follow @bhmlegion on Twitter for live game updates.