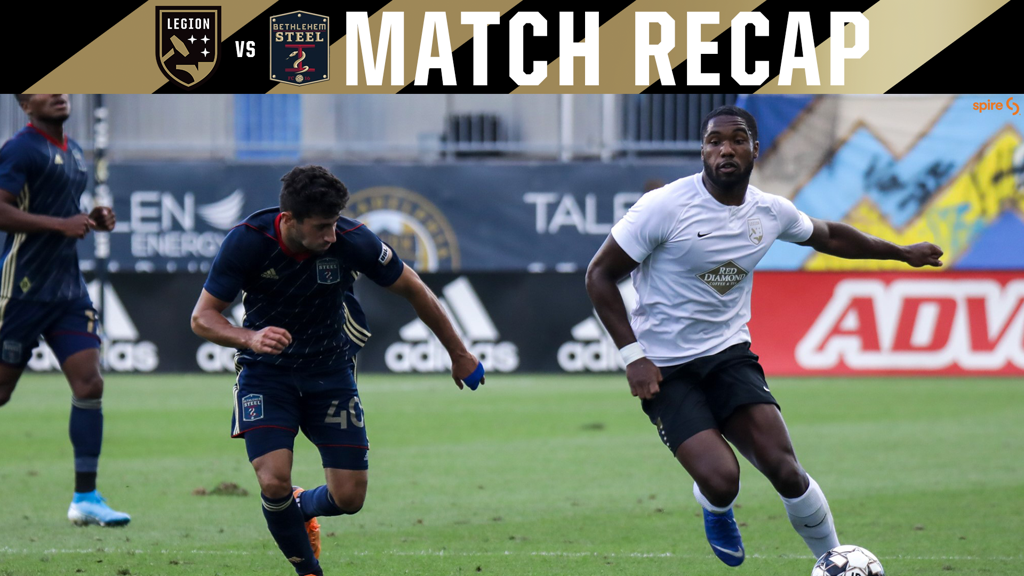 CHESTER, PA (Aug. 25, 2019) – Birmingham Legion FC have now won three, and gone unbeaten in seven, matches in a row, and jump up to ninth place in the USL Championship Eastern Conference standings following a wild 3-2 victory at Bethlehem Steel FC.

Midfielder Prosper Kasim got the scoring going early for the visitors, burying a pinpoint Akeem Ward cross in the 20th minute. The first half looked to end uneventfully, but an off-the-ball tussle between Bethlehem’s Sergio Santos and Birmingham’s Zach Herivaux led to straight red cards for both teams. BHM seemed to get the tough end of that interaction, as Herivaux was slapped in the face. Both teams went into the half down to ten men.

Forward JJ Williams got on the end of a clipped cross from midfielder Eric Avila and flicked in a cheeky finish to put Birmingham up 2-0 in the 67th minute, but after a scramble in the box, Steel FC come right back with a goal of their own in the 69th.

Bethlehem scored again in the 74th off a penalty kick, but less than three minutes later midfielder Mikey Lopez smashed in the game-winner to see his side earn all three points. The match ended quite stretched, as Bethlehem got another straight red for making contact with the official in the 77th minute, and Birmingham also went down to nine men after defender Razak Cromwell received a second yellow in the 83rd.

Birmingham finished with an edge in shots (16:12), shots on target (6:4), and possession (55%:45%) to outlast BST, after a total of seven yellow cards and four red cards were given out, to earn the victory. Head Coach Tommy Soehn said, “that was the weirdest game I’ve been a part of, to have that many… I don’t even feel like that was a four red card game. I think it spiraled into that. Disappointing for both sides because I actually thought the game started out quite well. It would’ve been an entertaining match, and then it turns into 9v9 and now it is what it is. You’ve got to find a way to survive those moments.”

“I just think it’s a belief right now,” said Soehn when asked about his team’s seven-match unbeaten run. “We obviously got a goal against us, which hasn’t happened in a while, but still found a way to come back after they tied it up. Again, credit to the guys for finding a way. Now we have our hands full because we lose three guys for the next one. We lose Mikey [Lopez, yellow card accumulation], Zach [Herivaux, red card suspension], and [Razak] Cromwell [red card suspension]. So that kind of takes away from the three points, which are so vital, because now in a coach’s mind, you’re already foreshadowing how we’re going to come out Wednesday [at Loudoun United]. In the end it’s still a gutsy performance. Winning on the road is not easy, and our guys keep finding a way to do it.”

Midfielder Eric Avila, when asked about the resiliency of the squad, said “everyone has just bought in to what we have. I think everyone’s on the same page, training’s have been tough, and we’re really competing against each other. It’s just making everyone better and better. It’s to the point where we know every week is kind of different, so there’s nothing about us going down, or putting people in different positions, because everyone knows their role and everyone knows the game plan and everyone just comes in excited to contribute.”

The second leg of this three-game road trip kicks off in the nation’s capital against Loudoun United on Wednesday Sunday, August 28. The game will air live on ESPN+ at 6:30PM CT.