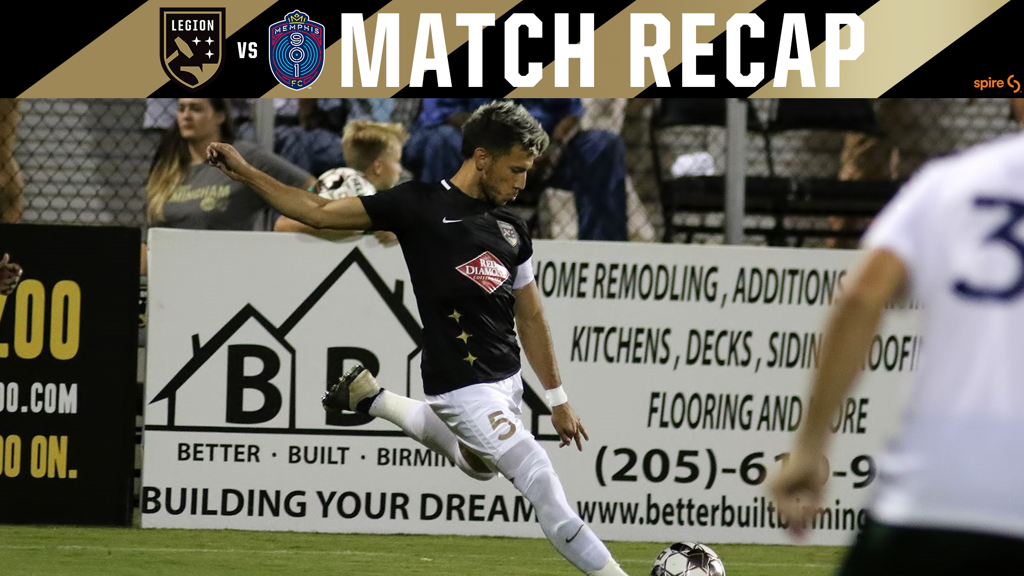 BIRMINGHAM, AL (Aug. 17, 2019) – Birmingham Legion FC again paired a stellar defensive effort in the second half of the season with a Daniel Johnson goal in the 90th minute to earn a thrilling 1-0 victory over regional rivals Memphis 901 FC to extend its unbeaten run to six matches (5-1-0).

Legion FC are now proud owners of the longest shutout streak in the USL Championship this season, as the squad has not allowed a goal in 555 minutes of action, or six full games and change. The victory also adds to Birmingham’s cushion over 11th place Saint Louis FC in the Eastern Conference standings to three points with 11 matches left to play in this inaugural season. The top ten teams in the conference make the playoffs.

Heading into the contest, the story was the depleted Birmingham roster, as seven players were unavailable for selection. Forwards Chandler Hoffman and Femi Hollinger-Janzen, midfielders Zach Herivaux and Daigo Kobayashi, and defenders Kyle Fisher and Gael Mabiala were all out with various injuries, and defender Kyle Culbertson was serving a one-game suspension for yellow card accumulation.

Defender Razak Cromwell slotted in at center back and played a major part in extending the shutout streak. To make matters worse, forward Eddie Opoku was fouled hard in the 8th minute and had to be subbed out of the match due to injury. Midfielder Joseph Holland stepped in and then so did Johnson, subbing on in the 65th minute, to earn all three points for the home side.

The ‘next man up’ mentality and effort put in by every player down the roster is what Head Coach Tommy Soehn was the proudest of following the win. He said, “I give a guy like Razak [Cromwell] a ton of credit. He came in and filled the role of Fish [Kyle Fisher]. We’re missing a lot of guys so that is why I think Eddie’s injury hurts so bad. We had seven guys out, now it’s eight. Despite that, our guys don’t stop, everybody just keeps filling roles. I’m really proud of our depth, and I’m really proud of our comradery, because you can’t get through stuff like this without everybody.”

Birmingham outshot Memphis 17 to seven, including getting 10 shots off inside the box. Johnson’s goal made all the difference and was his second goal in this unbeaten run. When asked about his game-winner, Johnson said, “Brian [Wright] played a really good ball, which I don’t think a lot of people will give him credit for because it’s a really nuanced ball that just came across the defenders, but when I kind of opened up again to curl it and I saw the keeper step, I just tried to put it near-post as best as I could. It took a little deflection, honestly, and it ended up in the goal. It’s one of those things where if you don’t shoot, you don’t score. I was just happy to see it go in, especially considering the time that it did [90th min]. Us securing another win, and another clean sheet – that’s most important.”

Now the squad hits the road again for a three-game stretch starting in Philadelphia against Bethlehem Steel FC next Sunday, August 25 at 6:00PM CT. Follow @bhmlegion on Twitter for live game updates, and watch live on My68 and ESPN+.