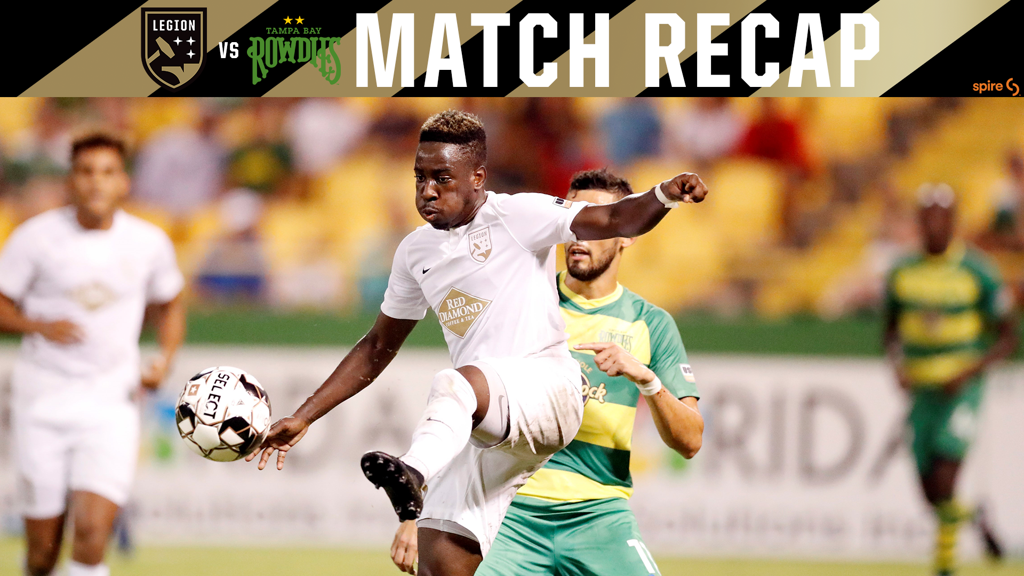 ST. PETERSBURG, FL (Aug. 10, 2019) – Birmingham Legion FC paired a continued stellar defensive record in the second half of the season with an Edward Opoku rocket of a goal to earn an emphatic 1-0 victory over the then-first-place Tampa Bay Rowdies to extend its unbeaten run to five matches (4-1-0).

Legion FC still holds the longest active shutout streak in the USL Championship as the squad has not allowed a goal in 465 minutes of action, or five full games and change. That streak is now good for second-longest in the league all season.

The victory also propels Birmingham up the table into 10th place, and the last playoff spot, in the USL Championship Eastern Conference with 12 matches left to play in this inaugural season.

“I think the mentality of the group is really strong, and we’ve had these talks about how everybody plays a role within the group, so when one, two, three, four whatever it is are out, we just keep trucking along,” said Head Coach Tommy Soehn. “I think when you look at what Akeem [Ward] added and even [Eric] Avila going to the middle of the park, I mean we made a lot of changes, but we also changed our game plan a little bit specific to Tampa. The thing I credit the guys most with is pulling it off. It’s always easy to game plan but it’s sometimes hard to pull it off and this group continues to impress me in the way we do things specific for teams and whatever our game plan is they’re able to execute it.”

Tampa Bay came out hot and controlled possession in the first half, 68.5% to 31.5%, but the boys from Birmingham absorbed pressure and hit on the counter again and again, putting four shots on target to the Rowdies three.  If it were not for a few objectively impressive one-on-one saves by the Rowdies goalkeeper, Legion FC could have taken an advantage into the half.

Thankfully, it did not take long for Opoku, your Legion FC Man of the Match, to tip the scales in favor of the good guys, with a rocket of a goal in the 49th minute. #6 Anderson Asiedu found Opoku, who was dangerous all night by leading the team in shots (5), shots on target (4) and chances created (4), streaking into the box, and #27’s shot from a nearly impossible angle zoomed right over the ‘keeper’s head, off the underside of the crossbar, and in the far side netting.

When asked about his impressive performance on the night, Opoku said, “the coaches’ tactics worked really well in the game because we know that they were playing a three back system with wingbacks so whenever the wingback pushes high into our half and we win the ball and have a breakaway their right centerback gets uncomfortable when I have him one-on-one. So, the game plan was just to execute, try and cut their wingbacks off, and then try to isolate their centerbacks on our wingers. We practiced really hard in training about it, and I think the whole team executed really well. I think the whole team bought into the coaches’ tactics this week and executed very well as a team.”

After what Soehn called “the most rewarding win of the season,” the attention now turns to next weekend’s match against Memphis and fighting to move further and further up the standings.

“This stretch of games has been really positive but we also have to be grounded and know how we got there,” said Soehn. “It’s been hard work and everybody dedicated to pushing forward and also being grounded and knowing that none of that happens without all the stuff we did to get there. It was important to address the group and talk about that, but I think all these moments keep bringing us closer and closer and getting us ready for the second half of the season and our expectations are really high right now and hopefully we can fulfill them.”

The next Legion FC game takes place at home on Saturday, August 17 at BBVA Field versus fellow USL Championship expansion side Memphis 901 FC at 7:00PM. Tickets are available at bhmlegion.com/tickets or by calling the Legion FC Ticket Office at 205-600-4635.